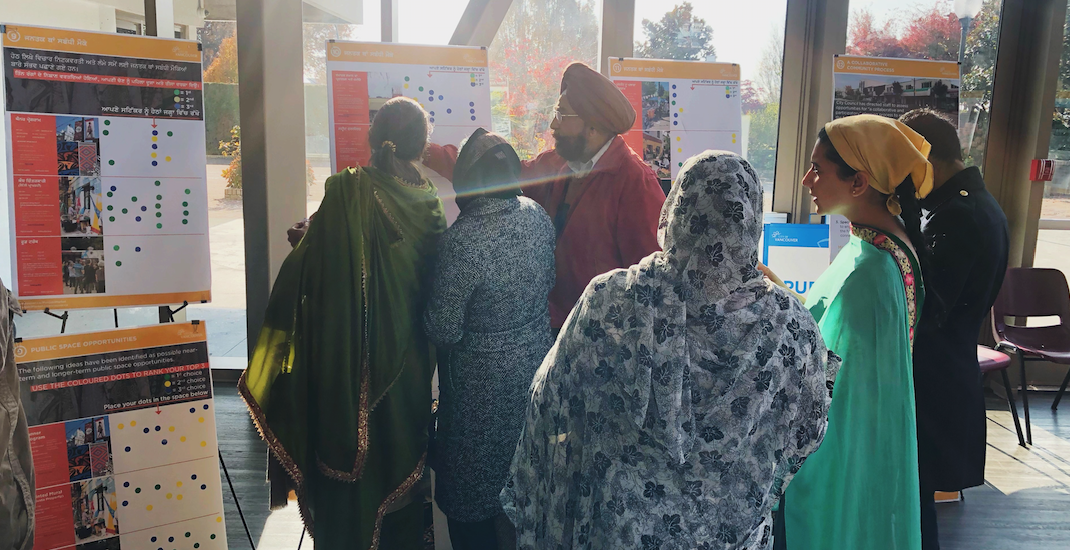 On Sunday, Vancouver’s historic Ross Street Sikh Temple was buzzing with residents young and old eagerly wanting to share their input on the next steps for revitalizing Main Street’s Punjabi Market.

The open house was the last of three recent public consultation meetings, planned by community-based organization Punjabi Market Regeneration Collective in partnership with the City of Vancouver. 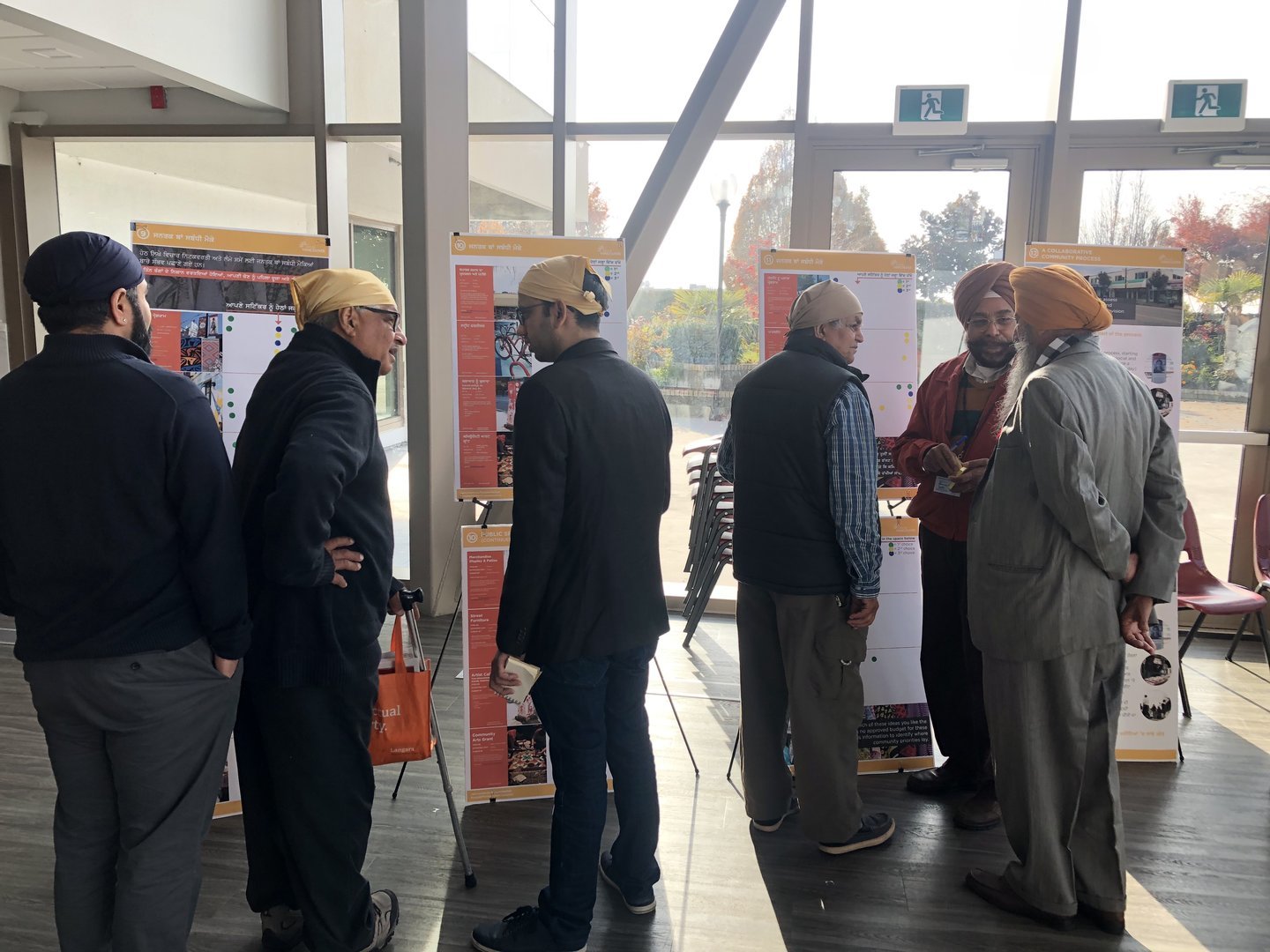 The two groups have been working together over the past several months after city council unanimously voted to pass Motion B.4: “Punjabi Market at Fifty: Celebrating the Past and Planning for the Future” in June.

The motion, proposed by Green Party City Councillor Pete Fry, aims to engage Vancouver city council in public consultations and “identify quick-wins” along with the required budget, resources, and potential partnerships to implement ahead of the district’s 50th anniversary on May 31, 2020.

At Ross Street Temple, residents were eager to participate in the engagement process, voting on potential short- and long-term projects — such as murals, parklets, street furniture, and decorative lighting — that they would like to see revive the once-bustling commercial district along 48th and 51st Avenue.

They were also encouraged to write down their ideas and share them on an open discussion board. Some suggestions included a night market, more green spaces, street festivals, creating community spaces allowing residents to meet and connect with one another, and keeping the free two-hour parking in the area. 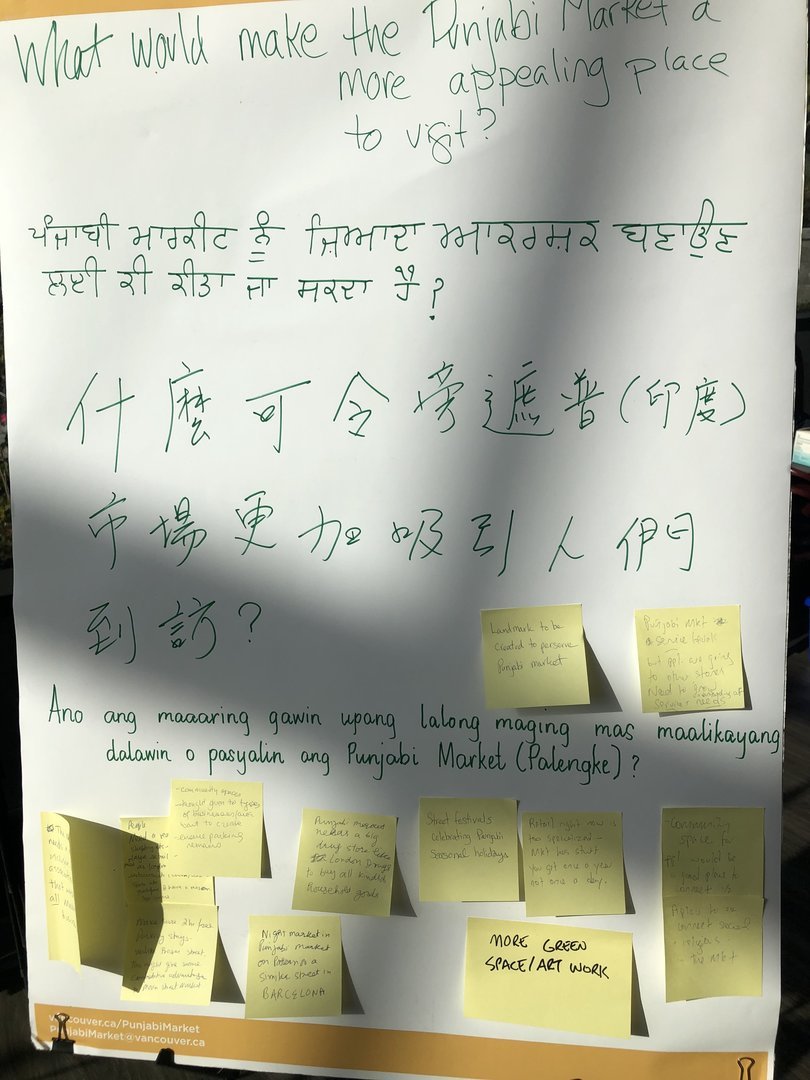 A number of city staff were present, engaging with the community and listening to feedback.

Councillor Sarah Kirby-Yung, who attended Sunday’s event, said that as a city councillor, she gets “the most out of actually going to the community and hearing from people directly.”

“It’s great when we get our staff reports and they summarize things for us but it never replaces having those one-on-one conversations with members of the community,” she told Daily Hive.

For many attending Sunday’s consultation, the Market was a staple part of their childhood and a place that connected them to their cultural roots.

“It’s somewhere as [children] we used to come and it was so lively, and now as an adult, you go there and it’s totally [a] ghost town,” said Vancouver-based graphic designer turned illustrator, Jag Nagra, who is also a member of the Punjabi Market Regeneration Collective.

As an artist, Nagra hopes to see South Asian inspired murals and public art added to the neighbourhood to create liveliness and vibrancy in the area. 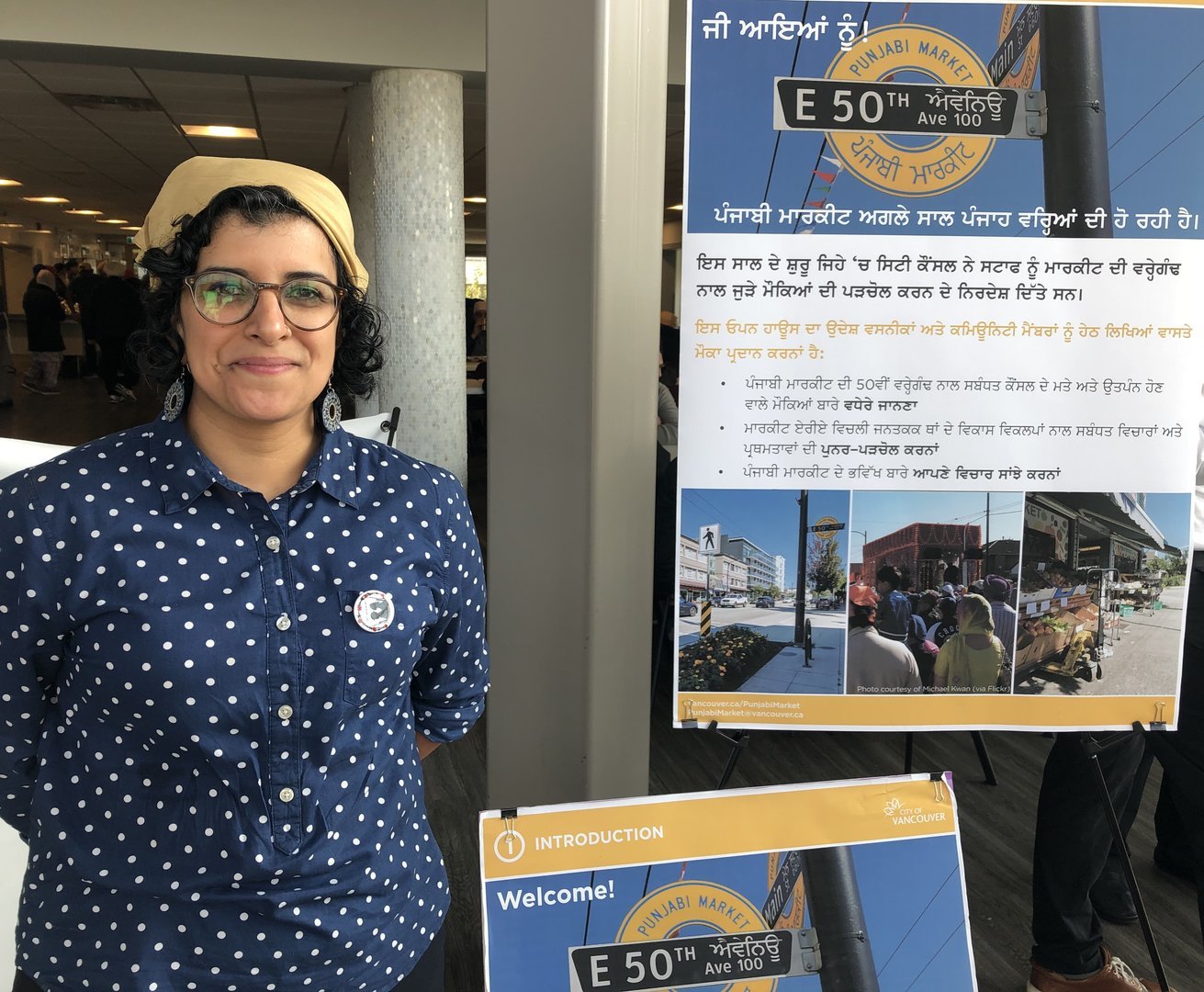 “One thing … when you’re travelling in India there’s so much colour everywhere, and whether it’s what people are wearing or the colours of the walls. In Vancouver you don’t get that as much, it’s all … brown [and] grey buildings. So bringing in huge murals featuring South Asian art, I think that would be awesome,” she said.

Navi Rai, the Regeneration Collective’s director of internal relations, says the Market was a “significant place” for her and her family.

“Especially when my parents immigrated from Punjab,” Rai told Daily Hive. “The Punjabi Market was a place where people could have social belonging. It was an ethnic enclave where people felt safe and now if you look at it in present day, it’s not what it was before,” she said. 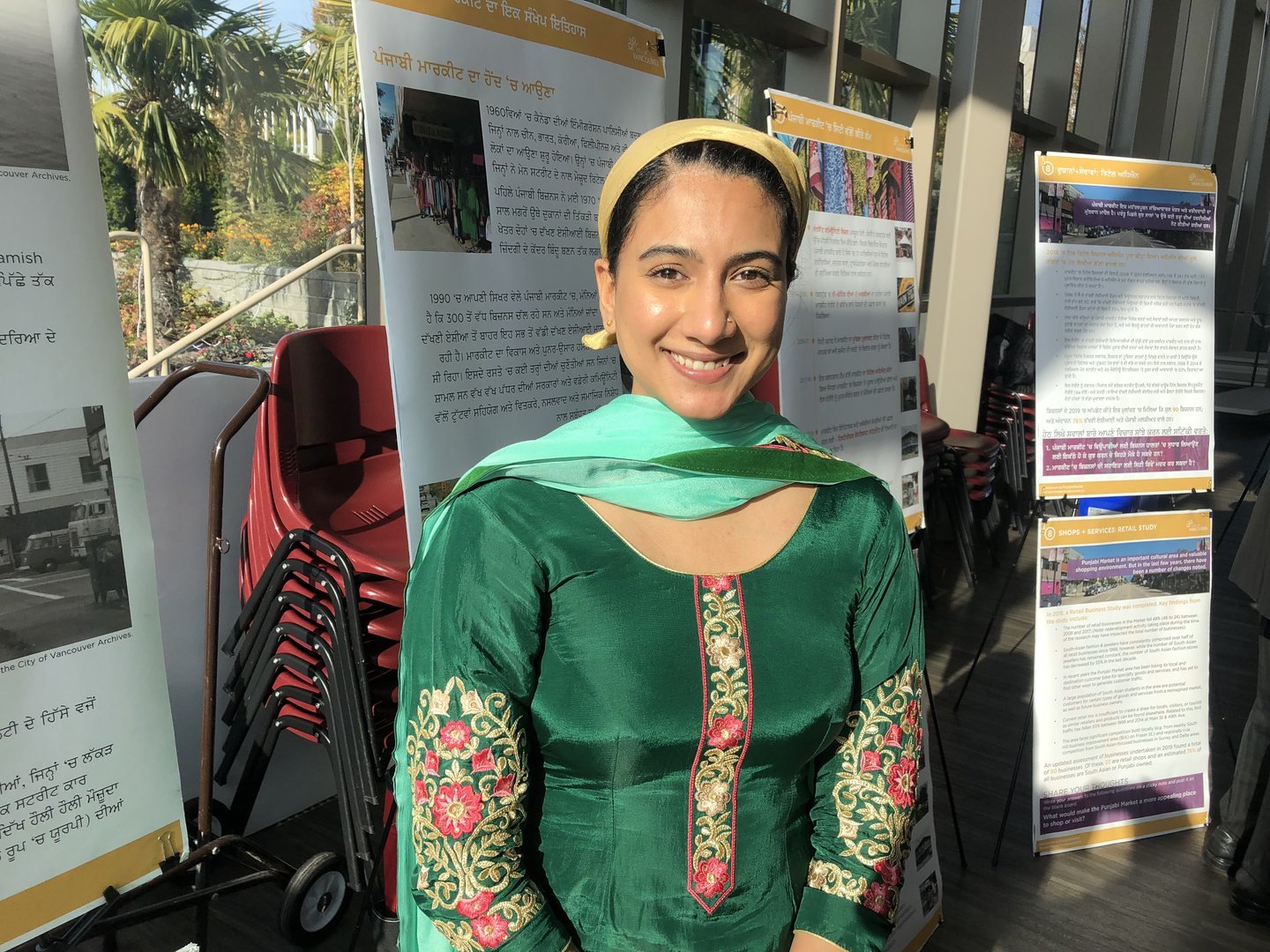 “So we are here to help evolve and continue and not let the legacy of our ancestors die away. And so that’s why I got involved because I just couldn’t see it disappear.”

At its peak in the 1990s, the Market had over 300 businesses operating and was considered one of the largest South Asian markets outside of South Asia.

A 2018 Retail Business Study commissioned by the  City of Vancouver found that between 2008 and 2017, the number of retail businesses in the Market fell by 48%.

“The area faces significant competition both locally (e.g. from nearby South Hill business improvement area (BIA) on Fraser St.) and regionally (via competition from South Asian-focused businesses in Surrey and Delta areas,” notes the report.

“In recent years the Punjabi Market area has been losing its local and destination customer base for speciality goods and services, and has yet to find other ways to generate customer traffic.”

Rai acknowledges that Surrey has become the new hub for South Asian businesses, but she doesn’t believe that should serve as an excuse to forget about Vancouver’s Punjabi Market.

“I think that it … just misses the hard work that South Asians have put into actually creating Vancouver as a city itself,” she said. “I think that history has been lost or forgotten.”

Now that the consultation events have wrapped up, city staff will begin reviewing the input they received and preparing a report for council.

This report will also include more specified recommendations and a proposed budget.

Kirby-Yung acknowledges that there are a number of short- and long-term goals for the Market and council will have to determine which projects are feasible and how to fund them.

“I think that will be one of the great conversations to have, and I think it will depend on what those tactics are,” she said, adding that certain projects like murals could be more practical to fund than others in a shorter time span due to “opportunities to tap into different funding pools” that support public art.

In a statement to Daily Hive, the City says its next steps for revitalizing the neighbourhood will be linked to the 50th-anniversary celebrations.

The staff report to council is expected to be sent in the next few months, and the recommendations will take into account the input received at the consultation events.

Despite the city’s involvement with the revitalization plan, Rai says the credit really needs to go to the community.

“I think a lot of the times, community has to show the city that they care and then the city will pay attention,” she said.

“I think … if we want to credit anybody here today, it would be the community. Without community, none of this work would have even been possible.”