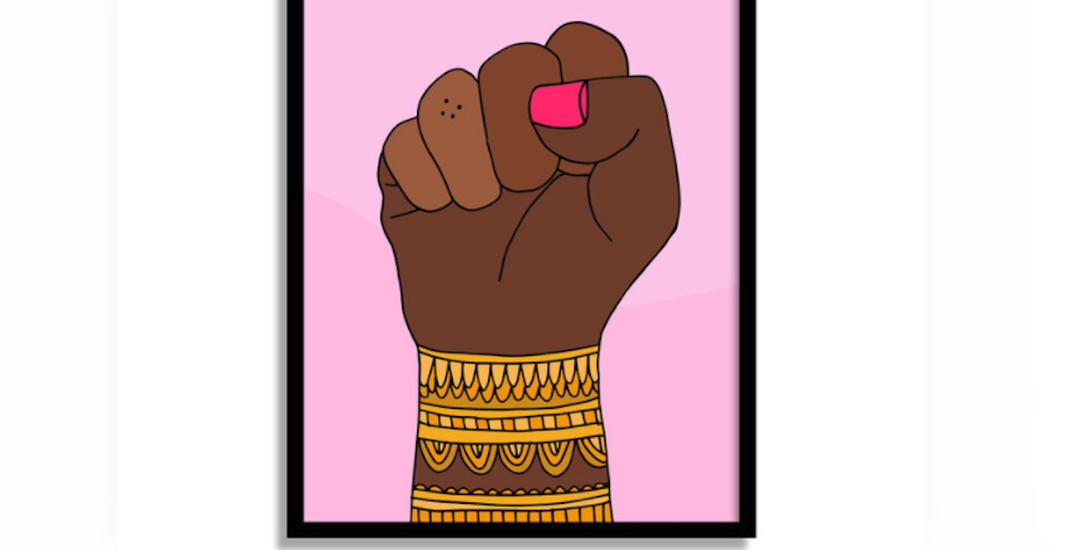 The print depicts a raised brown fist to symbolize the South Asian community standing in solidarity with the Black community.

The print was created by Jag Nagra, a graphic designer and the PMRC’s creative director, who tells Daily Hive the piece reflects how the South Asian community has to take a stand against anti-Black racism.

“We’re told that light skin is better, and that if you’re dark-skinned, you’re not beautiful, that you won’t be successful and that you won’t find love. That’s really damaging to hear.”

Nagra says there is a lot of work to be done within the South Asian community to dismantle these beliefs.

“We need to be better about calling out racism when we hear it or see it in our families or in our peer groups,” said Nagra.

“It’s not enough to just say, ‘But I’m not racist,’ and go about your day. We have to call people out and we have to show the Black community that we care.”

All proceeds from this print will support the Hogan’s Alley Society, a local non-profit that advocates for sharing the history of Black people in Vancouver and BC.

Hogan’s Alley ran between Union and Prior Streets from approximately Main Street to Jackson Avenue in Vancouver’s Strathcona neighbourhood and was an enclave to Vancouver’s Black population.

Its demolition in the 1970s to make way for the viaducts led to the displacement of its residents.

The print unframed 11” x 14” signed fine art print can be ordered online on the PMRC’s website.