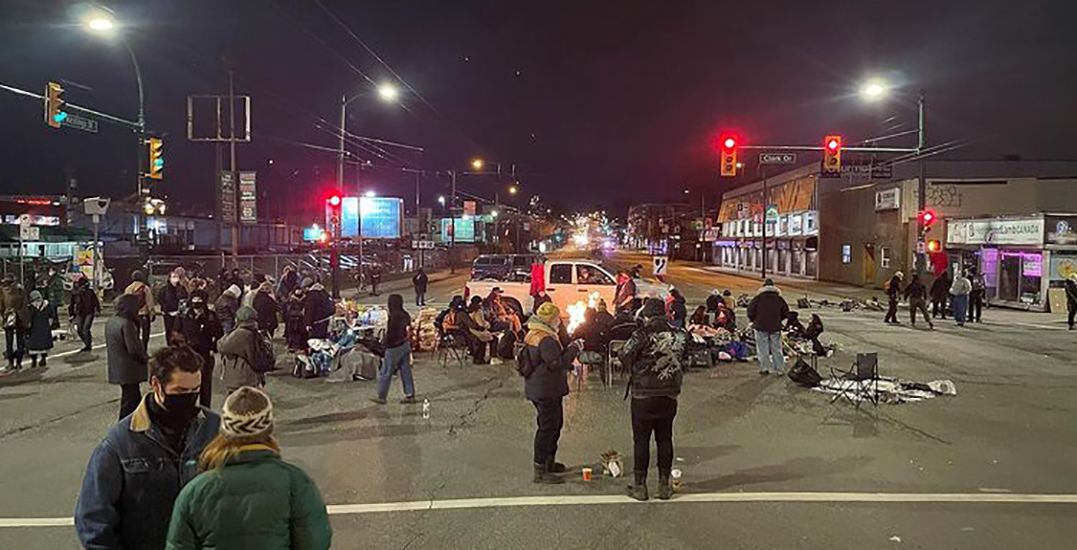 Four people were arrested and traffic was reopened at Clark Drive and East Hastings Street on Thursday morning after a protest closed the intersection to traffic for more than 24 hours.

According to Vancouver Police, about 75 people took part in the protest, and the four individuals were arrested “after refusing repeated requests” to clear the intersection.

“The VPD strongly supports peoples’ fundamental freedom to peacefully gather, demonstrate, and express their views, and this group was given a full day to do that,” said VPD Sgt. Steve Addison. “When it became clear some protesters had no intention of leaving, officers were forced to arrest them to reopen the intersection for all road users.”

The individuals were arrested for mischief and intimidation by blocking a roadway, police said. They were taken to Vancouver Jail and released on undertakings after they agreed to attend court at a later date.

The protest was hosted by the Braided Warriors, a group of Indigenous youth from the Musqueam, Squamish, and Tsleil-Waututh territories.

On Instagram, The Braided Warriors said they were calling on justice for Stacey Gallagher, an Indigenous elder who was sentenced to 90 days in jail.

“We’re here because today the colonial courts, the crown, sentenced Uncle Stacey Gallagher, an elder, a land protector, a ceremony person, to 90 days in jail during a global pandemic for peacefully protecting the land in ceremony,” a member of the group says in a video posted online.

A troubling incident involving the protesters and the Vancouver Police Department (VPD) made rounds on social media after a video posted online captured officers forcefully pushing and throwing protesters.