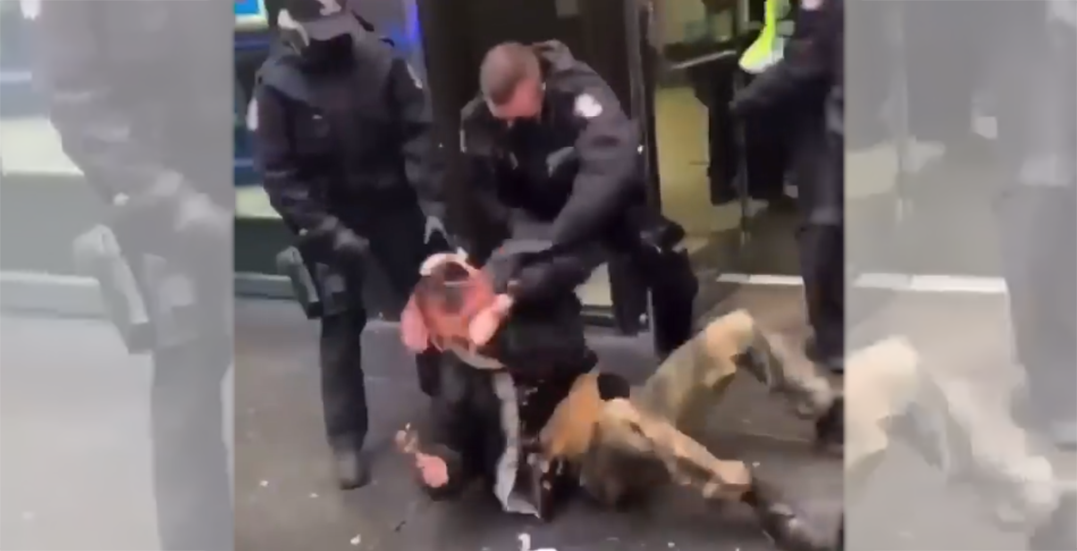 A troubling incident involving Indigenous protesters and the Vancouver Police Department is making rounds on social media and will undergo review by the VPD’s Professional Standards Section.

Over the past week, an organization called Braided Youth has been protesting in downtown Vancouver; the group consists of Indigenous youth from the Musqueam, Squamish, and Tsleil-Waututh territories. According to the Union of British Columbia Indian Chiefs (UBCIC), they’ve been occupying insurance companies and calling on them to stop backing the Trans Mountain Expansion pipeline project.

On Friday, February 19, the group was protesting at the BMO building when the demonstration appeared to become violent.

“Approximately 70 VPD officers, many of whom were not wearing masks, all came in at once,” the Braided Warriors said in a statement. “We were given no warning or any time prior to being violently assaulted and removed from the property.”

A video posted online appears to show VPD officers forcefully pushing and throwing protesters outside of the building and onto the ground.

“We were violently thrown to the ground, dragged across floors and down stairways, pulled by the hair and braid, thrown to a surface covered in glass, strangled in a chokehold, or dragged face down on the concrete.”

The Braided Warriors add that four of their members were held in custody for over six hours and that several of them required medical attention. They also say that their ceremonial items such as drums, abalone shells, feathers, and red dresses were “desecrated, thrown, stepped on, and broken.”

The VPD says that the protesters “tied off and blocked main entrances” and that officers were on-site for two hours to keep the peace.

VPD spokesperson Tania Visintin says that police had to move in for “several reasons.”

She explains that people were “unable to enter and exit the building from the main doors” and that “building management asked for the space to be cleared. Visintin also notes that some of the protesters were “aggressive” and building occupants were concerned for their safety.

“Multiple occupants expressed concern for their safety as they tried to enter and exit the building,” she tells Daily Hive in a statement. “A few protesters were aggressive and physically fought with police and damaged a glass sign in the building. Officers were called from across the city to assist.”

Judy Wilson, Secretary-Treasurer for the UBCIC, says they’re “appalled at the VPD’s treatment” towards the Indigenous youth protesters.

“While the government claims to be taking action to end systemic racism and to seek reconciliation, Indigenous youth are being thrown on the ground, their hair is pulled, and they have to go to the hospital for police-inflicted injuries.”

The VPD has confirmed with Daily Hive that the incident will be reviewed by its Professional Standards Section.