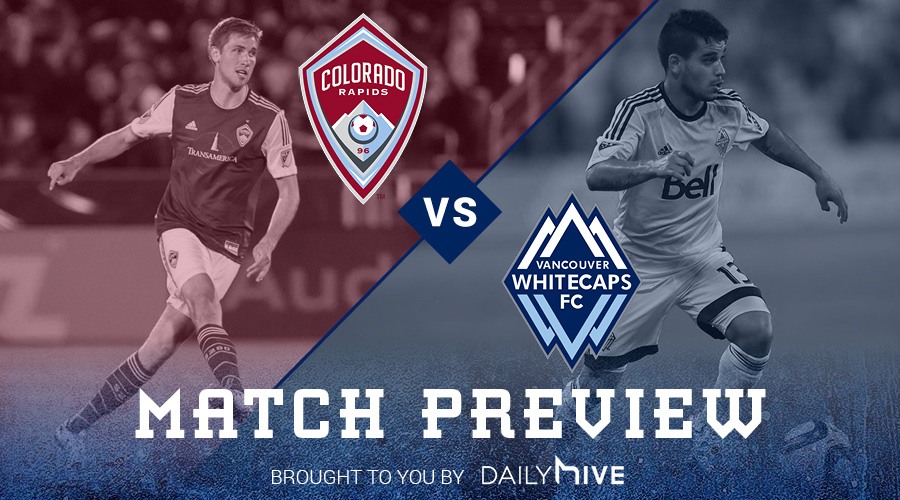 The Vancouver Whitecaps (8W-9L-6D, 30pts – 6th Western Conference) have now entered the MLS stretch run. With just 11 matches left in the regular season, every game counts in the playoff race.

When the Whitecaps and Colorado Rapids (10W-3L-8D, 38pts – 2nd Western Conference) last played at BC Place on July 9th, the Rapids nicked a single point when they scored late in second half stoppage time. The ‘Caps will be eager to make amends, but they haven’t won at Dick’s Sporting Goods Park since 2012.

Both of these teams have only won one match out of their last six, and Vancouver lost both games in Colorado last year. The stage is set for an intriguing game on Saturday night.

The name is Barnes. Giles Barnes.

Last weekend the Vancouver Whitecaps announced they had acquired midfielder/forward Giles Barnes from the Houston Dynamo for general allocation money and the first right of refusal to Costa Rican defender Keynor Brown.

The 28-year-old Barnes is a welcome addition to the Whitecaps attacking corps that has been depleted due to injuries and the departure of Octavio Rivero. Barnes has been described as ‘a one-man counter attack’, and is a player that Whitecaps manager Carl Robinson has tried, and failed, to bring to Vancouver twice in the past.

Barnes scored 31 goals and tallied 14 assists in just 113 appearances for the Houston Dynamo, and was their leading scorer and player of the year in 2014.

Watch out, BC Place corner flags. Here's what @WhitecapsFC can expect from the Jamaican international. #VWFC https://t.co/t47tfxIwe2

Despite not having an out-and-out goalscorer on the team, the Whitecaps have still managed to find plenty of goals this season. Barnes will be joining a talented attacking corps that includes Christian Bolaños, Pedro Morales, and Nicolás Mezquida.

If Barnes and rest of the group can gel there could be plenty of goals to come down the stretch.

Racking up those Frequent Flyer miles

In the space of just over a week the Whitecaps made two trips to Texas, and made a trip for to Trinidad and Tobago for a CONCACAF Champions League match.

Robinson has worked hard over the years to build a deep squad that can handle the rigours and challenges that are often faced by MLS clubs.

The results from the past week are a mixed bag.

The Whitecaps tied in Houston, lost in Dallas, and won their CCL match in the Caribbean.

All that mattered tonight was 3 points for @WhitecapsFC – congrats to players & staff. Heat, travel…1-0 = 3 points. Proud of @wfc2 players

While the recent schedule has been tough, Robinson managed to win the CCL match against Central FC without using most of the players from his preferred MLS starting XI.

For example, Kendall Waston, David Ousted, and Pedro Morales were not included in the CCL team. Robinson did play a number of his regular starters including Bolaños and Cristian Techera, but mostly relied on younger players from further down the depth chart and from their USL team, Whitecaps FC2, for his lineup. The gamble paid off, and the Whitecaps beat Central FC 1-0.

Pluggin’ them holes at the back

The problems the Whitecaps have at the back have been well documented and discussed all season long. Until those problems are solved they will remain a hot topic of discussion among soccer fans and pundits in Vancouver.

In an attempt to help shore up the defence, the Whitecaps picked up Canadian defenders Marcel de Jong and David Edgar. De Jong, who was playing for the Ottawa Fury, has already seen minutes for the Whitecaps. With the incumbent Jordan Harvey nursing a left knee sprain, the experienced de Jong provides Robinson some much needed cover at left back.

Edgar, who had not played a competitive match in a couple of months, has been training hard to regain his match fitness. The 29-year-old Kitchener, Ontario native finally played his first competitive match for the Whitecaps on Tuesday, and was an unused substitute in the 2-0 loss at FC Dallas last weekend.

Just like fellow defender Pah-Modou Kah, Edgar is a vocal leader on the pitch and is skilled at marshalling and directing players beside and in front of him. Kah was in action for 10 of the 13 clean sheets the Whitecaps earned in 2015, but has seen very little of the pitch this year. Without a clear leader at the back this year the ‘Caps have struggled defensively, and have conceded the second most goals in MLS.

Edgar’s presence and leadership on the pitch is exactly what the Whitecaps’ backline needs. When the Whitecaps and Rapids last met at BC Place on July 7th, it was a defensive miscommunication between Kendall Waston and Jordan Smith that allowed Axel Sjöberg to snatch a late equalizer for Colorado. Robinson will rely on Edgar to use the knowledge and skills that he learned while playing in the top levels of English football to help make a difference for the ‘Caps.

The Whitecaps have not been able to win a match in Colorado since 2012, and the stakes are high. Vancouver currently sits in the sixth, and final, playoff berth in the Western Conference.

A win will not be enough for Vancouver to catch Real Salt Lake in the standings, but a loss or draw could result in the ‘Caps being caught, and passed, by the Portland Timbers. The Timbers, who are only a point behind in the standings, have been outside of the playoff race for months and would like nothing more to finally sneak into a playoff berth at the Whitecaps’ expense.

With only 11 matches remaining in the season, each and every point won, or lost, is critical in the über competitive Western Conference playoff race.