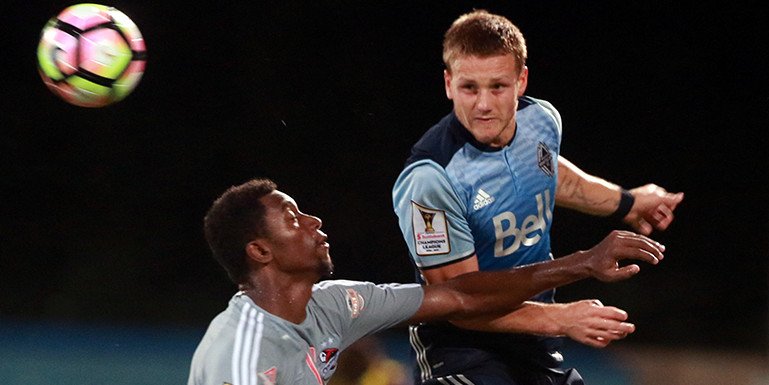 The Vancouver Whitecaps kicked off their participation in the 2016-17 CONCACAF Champions League with a 1-0 road win over Trinidad & Tobago’s Central FC on Tuesday.

Despite flying over 4,000 kilometers on one-day of rest after falling 2-0 in Texas on Sunday, the Blue and White put up a solid performance that earned them their first road win in the continental competition.

Carl Robinson and his coaching staff put together a lineup composed of a mix of rookies and veterans, a combination of the MLS and WFC2 rosters, a mixture of proven players and young guns looking to prove their worth.

This decision incited the wrath of certain factions of Vancouver’s fandom who accused the club of not taking the competition seriously.

Not saying it is wrong, but performance in Voyageurs Cup and squad sent to T&T emphasize @WhitecapsFC not interested in CCL. Your thoughts?

Yet, if the Welsh tactician had picked his MLS starting eleven, cries for his head would rise for tiring his best players in a “meaningless” match.

The fact that this team put up a strong performance and, more importantly, that they got the full three points make these conversations a moot point. Taking a competition seriously means assessing the game in front of you and selecting a team that will give you the best opportunity to win.

At the end of the day, in football winning is all that matters and the makeshift ‘Caps delivered.

There were a few players that played a particularly strong game on the day.

The decision to send WFC2 goalkeeper Spencer Richey to guard the Whitecaps net ahead of MLS back-up Paolo Tornaghi or Canadian MLS third stringer Marco Carducci net raised the eyebrows of many. Richey has been outstanding for WFC2 in 2016 and he paid back the trust in him with a good performance and a couple of key saves.

Central back newcomer, David Edgar played his second 90 minutes with the club after completing a match with WFC2 a couple of weekends ago. The 29-year-old created a solid duo with veteran Pa-Modou Kah and the Canadian international looks closer to being ready to claim a starting spot in MLS action.

David Edgar comments after helping #VWFC keep a clean sheet in his competitive debut with the club. #SCCL pic.twitter.com/s4PLCccKkc

Brett Levis has been the talk of the town over the last few weeks. The midfielder-turned-left-back, saw action with the first team for the second time after playing in the Crystal Palace friendly a few weeks back. The Saskatoon native once again did not look out of place and, with a nice piece of trickery, started the play that delivered the game-winning goal for his team.

Finally, Cristian “El Bicho” Techera was a nuisance for the Trinitarian backline. The Uruguayan was very lively on the left flank, taking players on, winning corner kicks, and being defensively responsible. His efforts were rewarded by scoring the game-winning goal. His third goal of the season, all of them scored after he was interviewed by Daily Hive. Just saying.

The Whitecaps failed to win both of their road games in last edition of the CONCACAF Champions League. As such, the Blue and White failed to qualify to the knockout stage.

The win in Trinidad & Tobago will prove crucial in their aspirations to move forward to the next round. They only have to make their games count at BC Place later in the month and get a result in Kansas City.

Full credit to #VWFC C team. They managed to pull off a win. Easily could've been a loss, but Richey did well to earn us 3 pts. #CCL

For now, this Whitecaps contingent will return to Texas to reunite with the other half of the team before making their way to Colorado in preparation for battle against the Rapids on Saturday.