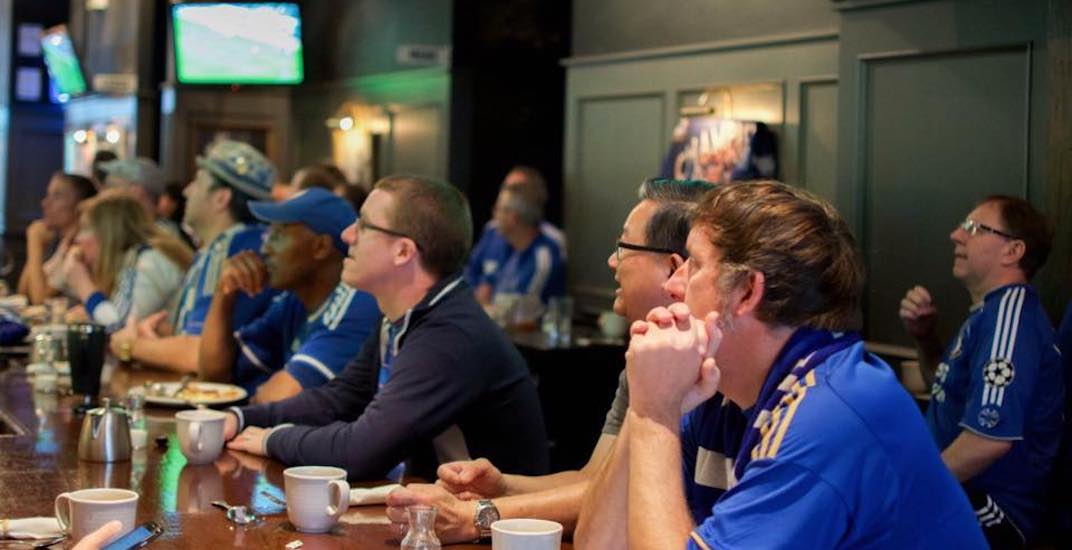 Die-hard Canucks fans may want to take note, because there’s a group of sports fans in this city that redefine the meaning of “loyal.”

Waking up at 5 am, trudging out to the pub in the early light of dawn, and exploding with energy (and song) while everyone else is still fast asleep—just to support your team?

Sure, we all bit the bullet and stayed up into the ungodly hours of morning to watch the Canada vs Sweden gold medal hockey game in 2014—but imagine doing that every weekend.

Well, that just happens to be exactly what hundreds of English Premier League fans do at Donnelly Group pubs around Vancouver.

Differing timezones and matches starting in the afternoon in England means that live airings of the Premier League happen on our side of the world at roughly 6-8 am.

And do you really think that’s going to stop football fans? No way, Damon Holowchak, Proprietor of the Donnelly Group, told Daily Hive in a phone interview.

“There’s some 4:30 am games once in a while, but we’ll have staff in there, lights on, it’ll be ready to go,” said Holowchak.

He said the pubs manage to draw a significant crowd even for these super early games.

“For the larger matches with the bigger clubs, we will fill the pub. It’ll be full. It’s crazy, it’s the best atmosphere,” he said.

The Donnelly Group first began airing the matches live some 10 years ago, for the supporters clubs that had already been gathering.

Back then those groups would be maybe five or six people coming together in the mornings to watch a match at someone’s place. Now they number in the hundreds, and each group has its own home pub.

“It’s so nostalgic for expats, and that’s really what we were trying to build. It wasn’t just a business decision, but it’s also a cultural kind of feel,” Holowchak said.

“This is a big deal for these guys, so it’s been amazing for them to build their own little culture—a few hundred, at times, likeminded supporters in a pub just going off.”

The teams’ supporters clubs are split up between different pubs around town. Putting them all in the same room would be a bit too rowdy, and things already get somewhat chaotic:

Anyone looking to catch an early morning match is welcome to attend; you don’t have to be a part of the supporters club to join in on the excitement.

These Donnelly Group pubs aren’t the only ones showing the matches live, however, as The Dirty Penny is the meet-up spot for the Newcastle United Supporters, and will be open early for games this weekend as well.

The pubs’ main goal is to make the atmosphere feel as authentic as possible, said Holowchak.

“It almost feels like a home away from home, where there’s a few elements in there that are a little bit of old school familiarity of what you’re used to,” Holowchak said.

“With some of the games I’ve been to, it’s insane how boisterous and raucous they are. You definitely feel like you’ve just been transplanted over to an actual pub in the UK.”

The pubs even make region-specific food just for the matches to add to the overall atmosphere. Holowchak said the feeling they’re trying to capture is something that most sports fans in North America have never seen.

“English soccer fans are a different breed of human. I’m lucky enough to have gone to the Liverpool derby in Anfield and watch them play, and it was nothing short of a life-changing experience,” he said.

“It’s unbelievable, its just a different culture. We’re getting there with the MLS here, but I’ll be honest, these guys are just fantastically loyal to their teams to a level that it’s tough for us to imagine here.”

The English Premier League starts off this weekend with a Liverpool vs Watford match airing at the Butcher & Bullock at 4:30 am on Saturday.