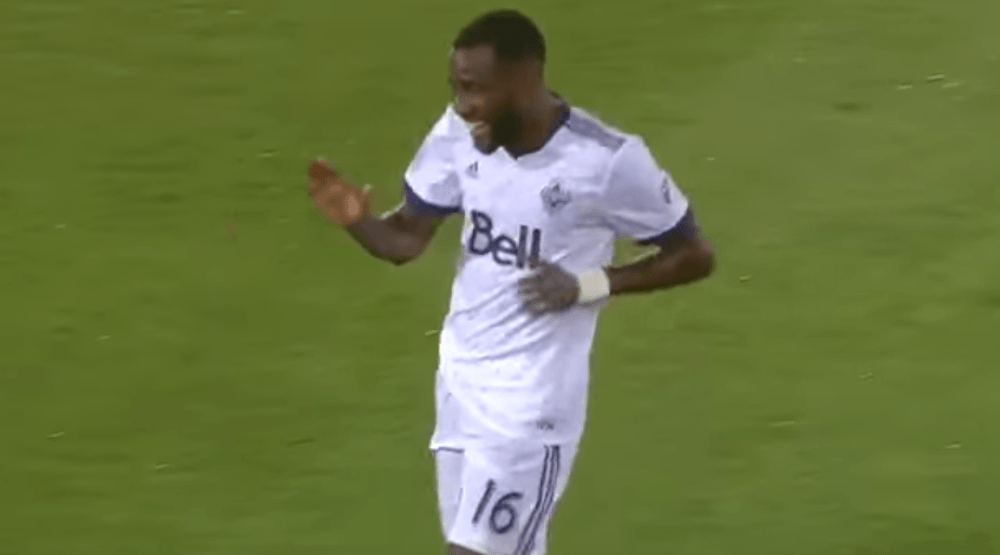 If there were any lingering doubts about whether the Vancouver Whitecaps’ trade with the Columbus Crew – the one that sent winger Kekuta Manneh east for midfielder Tony Tchani – was anything other than a triumph for the ‘Caps, allow this goal to put your mind at ease.

That’s Tchani sending a seeing eye worm-burner through a crowd of players on a rainy Colorado pitch, off the far post and in behind a helpless Tim Howard.

You may collect your collective jaws off the floor now.

Incidentally, that’s Tchani’s second goal in four games, with the prior goal being the one that sealed a 1-0 win for the ‘Caps against the Los Angeles Galaxy. So, yeah, he’s kinda earning his place in midfield. Good for him.

While Tchani’s early goal on this night put the Whitecaps in the lead, alas, it was not to last. Two goals from the Rapids and one from Fredy Montero left the game level at 2-2 and the Whitecaps with four points so far on their road trip.

Compared to the gargantuan Axel Sjöberg (6-foot-7) manning the Colorado backline, though, Montero looks downright teeny. You might, if you were so bold, call it a total and utter size mismatch.

So, naturally, Montero went and scored the equalizing goal on a set piece from Techera, using his head after ghosting away from the Colorado defense.

To be fair, this was a far sight better than Montero trying to match Tchani’s goal from earlier and bang one in from distance.

I mean… just… no. No. Count the white jerseys flooding the box, waiting for a juicy cross or through-ball to tap home. Note how that number is higher than two. This is not a result that means “crank it!”

Oh well. He scored in the end, so, call it a wash.

Hey, about our backline…

Kendall Waston did not make the trip. Spent the week in Costa Rica with immigration appointments. #VWFC #COLvVAN

Now, were there lucky bounces for Kevin Doyle and the Rapids attackers? Boy howdy, yes, so let’s not give the burgundy-clad opposition too much credit.

Here’s the thing – good defenders don’t let those bounces happen in the first place. It was a bad series of man-marking that let that counter-attack develop the way it did, compounded by a less-than-stellar set piece in the first place.

That theme of bad marking was also on display on the Rapids’ first goal, too.

Just how we drew it up 🙈 pic.twitter.com/lr5sqaQsZe

Sure, let’s leave the honkin’ massive Swede alone at the back post. Fine idea.

Good thing David Ousted was on hand to make another of his trademark big moment saves to prevent a total catastrophe.

Head coach Carl Robinson said as much in the post-game interview.

“It was a little bit open for my liking,” says Robbo, using some of that trademark understated commentary.

And yet, it was so close

So this Bernie Ibini guy is pretty good at soccer.

Only a last-ditch slide tackle stops Ibini from going roof on Rapids goalkeeper Tim Howard. That’s how thin the line between “road draw” and “road demolition” was on this night, which is a positive commentary on how deadly the Whitecaps attack these days.

Deadly like, as a further example, a midfield backheel flick-pass with enough mustard to spring an attack up the right.

This is why coaches like Carl Robinson refer to roster selection from a disgustingly deep attack pool as the best problem to have.

When you can start Christian Bolaños, Bernie Ibini and Yordy Reyna and still have Cristian Techera and Brek Shea coming off the bench – to say nothing of Nicolas Mezquida, Erik Hurtado and some kid named Alphonso Davies waiting in reserve – you always have a chance.

That’s a good thing. Just not good enough on this night. Still, a draw on the road at altitude is never to be sniffed at, so file this under “job well done” and get ready for the next road test in New England on August 12th.