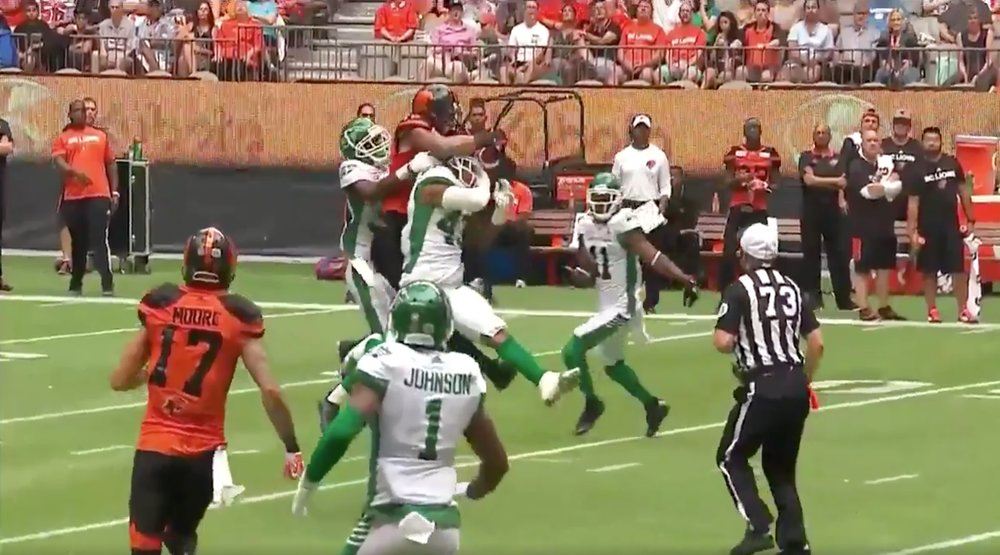 Bryan Burnham has done it again.

Just three weeks after making the catch of the year in Hamilton, the 27-year-old receiver made another spectacular grab to his resume, helping the BC Lions to a 30-15 win over the Saskatchewan Roughriders at BC Place on Saturday night.

With the Lions backed up near their own goal line, quarterback Travis Lulay aired the ball out down the middle of the field, throwing to Burnham into double coverage. Burnham was able to wrestle the ball away from the Roughriders’ Erick Dargan, with Chris Myles on his back.

The catch took concentration, athleticism, and aggression. The 50-yard gain, coupled with a 15-yard roughing the passer call, moved the ball 65 yards from the Lions’ own four-yard line and into Saskatchewan territory.

“I couldn’t quite get as much as I wanted on to it,” Lulay explained after the game. “The ball landed short. But Bryan Burnham did what Bryan Burnham does. He made a great catch.”

I told Geroy once "I think Burnham is going to be great." He's like AJ 3.0 athletic, fast,size, football IQ. Game peeps game. #BCLions

Saskatchewan wide receiver Duron Carter also made an amazing catch on Saturday, hauling in a 46-yard touchdown pass from Brandon Bridge in garbage time. Not sure I would have trash talked the DB being down 30-6, but nevertheless it was an impressive snag.

Carter made a highlight reel TD catch against the Toronto Argonauts just last week that’s in the running for catch of the year (along with Burnham’s) in the CFL this season.

Wide receiver Chris Williams made his much-anticipated debut with the Lions and he didn’t disappoint. The 29-year-old made three catches for 75 total yards, including a beautiful 49-yard streak halfway through the opening quarter.

Williams completely changes the look of the Lions’ offence as he draws a lot of attention with his speed, opening up routes for the rest of the receivers. That’s a scary thought for the rest of the CFL, as BC arguably already had assembled the strongest receiving corps in the league with Burnham, Manny Arceneaux, Nick Moore, and Marco Iannuzzi.

Burnham, Williams, Arceneaux, etc etc. Once the #BCLions put it all together, they will be SCARY. #CFL

With Saskatchewans’ linebackers and defensive backs paying so much attention to the Lions’ receivers, BC’s running backs were able to rush for 161 yards led by Jeremiah Johnson, who had 74 yards. Add in the 41 yards gained by Lulay and backup Alex Ross, and the team rushed for a total of 202 yards on the night.

Add that to the 345 yards gained in the air, and if you have a massive total of 547 yards on offence.

As Jonathon Jennings nears a return from his shoulder injury, the Lions have an interesting dilemma – some might even call it a controversy – on their hands.

Does head coach Wally Buono give the ball back to Jennings, as the acknowledged No. 1 quarterback?

Or does he continue to ride Lulay, who is 3-1 since Jennings went down, averaging 359 yards passing per game?

My gut feeling is that Buono goes with Jennings, presuming he is 100% healthy, but we’ll see.

As expected, Wally won't commit to who the starter will NE next week. Says he won't use both. #BCLions @CFLonTSN

The Lions and Riders will meet again next week – Sunday at 5 pm PT – at the new Mosaic Stadium in Regina. At 5-2 on the season, BC sits in third place in the ultra-competitive West Division.