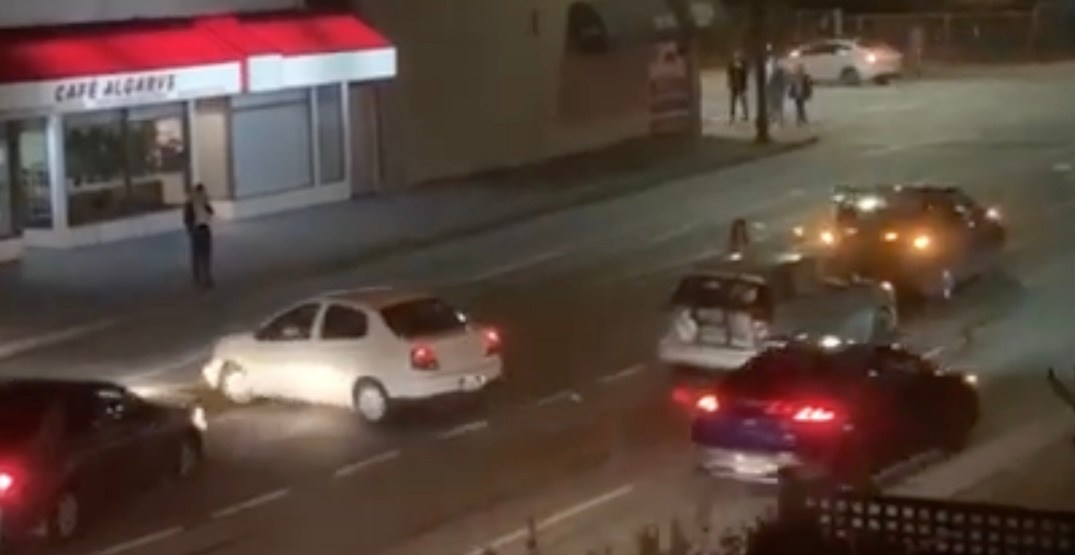 A video that received a lot of attention on the Vancouver subreddit shows a driver driving away from the scene of an alleged hit-and-run, and the victim is hoping someone can identify the suspect.

In the video, you see cars stopped at a traffic light at the busy Vancouver intersection of 12th Avenue and Commercial Drive before the car that allegedly initiated contact in the hit-and-run makes a U-turn and drives away.

While her radiator is “probably really damaged,” Stephanie Gaultier found some reason for optimism amid the chaos of the situation.

The crash involved a white Toyota Echo hitting her from behind. She told Daily Hive that there were about three seconds of screeching before impact that “crunched” her car into the vehicle in front of her. She was driving towards Maple Ridge at the time, before being stopped in a line of vehicles at a red light.

“I’m guessing it’s totalled but I need to get it looked at to know for sure.”

She suggested that other witnesses came forward online and gave her some new information, like someone suggesting the car was seen speeding down Woodland Drive, “sounding very rough with the bumper almost falling off.”

She also said a witness saw the car going through a “do not enter” barricade.

According to Gaultier, the driver was a blond Caucasian woman who had long hair, who was “maybe in her 30s or 40s, (or a really mature-looking 20s).”

“Two people said they reported the driver to the police.”

Gaultier herself also reported the case to the police.

Despite being six months pregnant, she found some reason for optimism.

“It’s also quite a lovely story of Vancouverites coming together to help. My phone went flying in the crash and I was too dazed to remember any phone numbers, so a few people who saw the crash searched my car for the phone.”

That process took about 15-20 minutes. The video was also thanks to another good samaritan who was nearby.

In a comment in the Reddit thread, Gaultier suggested she realizes that in the grand scheme of things it isn’t a big issue and that Vancouver Police probably have more important things to worry about.

“If I want results, I’ve got to find them myself.”