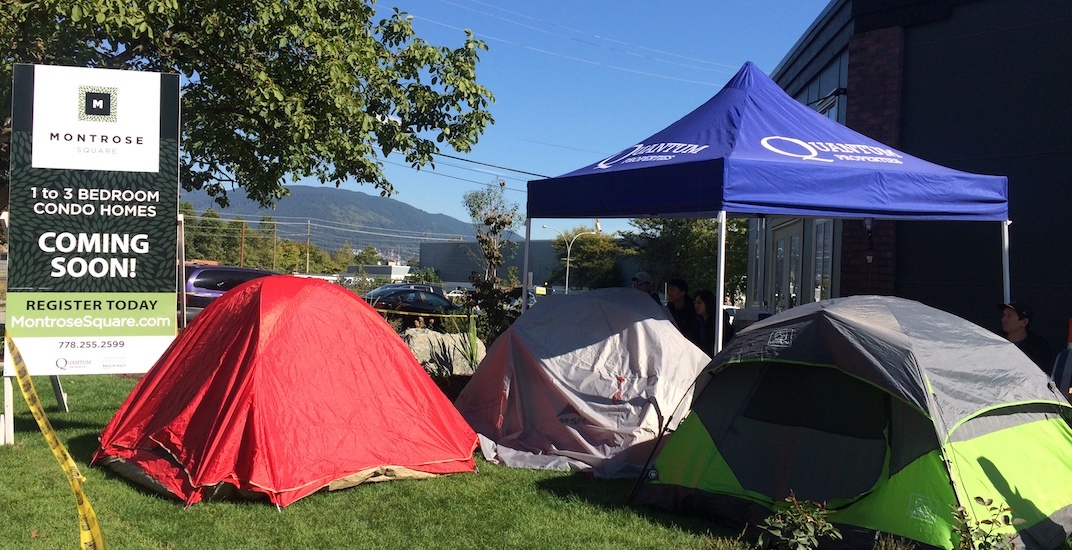 If you’ve been wondering about the tents lining Mary Hill Road and Wilson Avenue in Port Coquitlam, you may be glad to know it isn’t any kind of City urban-tenting initiative.

The campers are dug in for a Montrose Square condo pre-sale – part of what will be a group of multi-use buildings and a pedestrian-only plaza connected to the new recreation centre.

The sale starts on Saturday, but eager buyers have been camping out since as early as Wednesday to put a deposit down on their future homes. 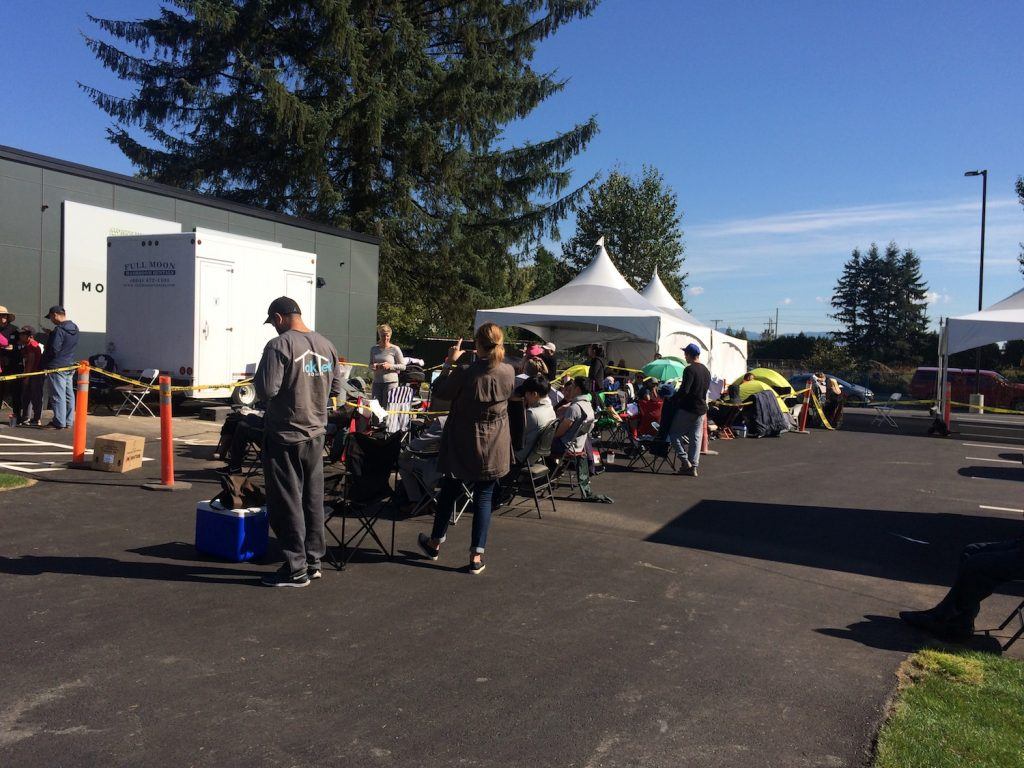 Bathrooms are provided, and attendance is taken at random times throughout the day. (Dana Tong)

Young buyers in a tough market

Dana Tong, a 23-year-old Port Coquitlam resident, has been in line since Wednesday evening, and currently sits as 21st in line.

She has been rotating out with her boyfriend Nick Theobald, as they are looking to purchase a first home together at Montrose.

“For us, being a young couple and still living at home, the only reason that we’re prepared to pay this kind of money is that it’s a set price – you’re not going to get into a crazy bidding battle,” Tong said in a phone interview with Daily Hive while waiting in line.

“And because then we will have two more years until it’s built to save up and put more towards our downpayment and have a lower mortgage – time to build our careers, to hopefully get promotions and wage increases until the building is built, and then we can better afford our mortgage.” 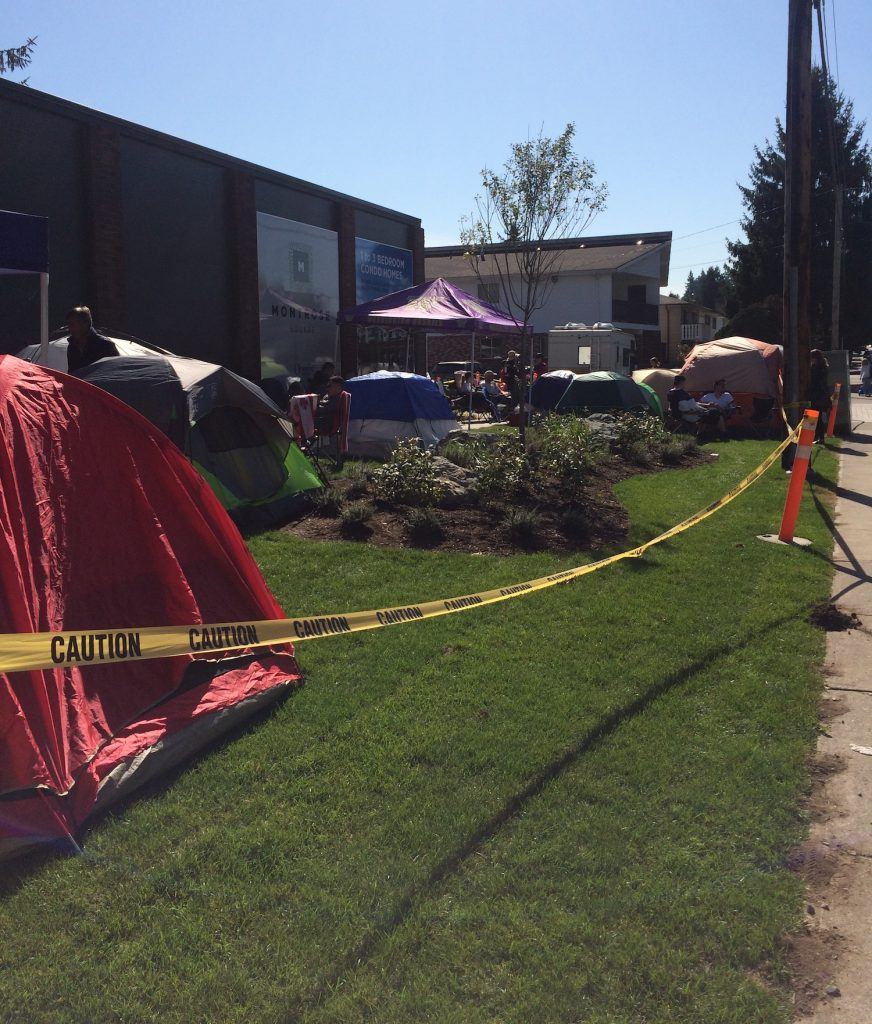 Tong said she has been camped out since Wednesday night, with those at the front of the line having arrived a few hours before. (Dana Tong)

Tong estimates that there are roughly 60 people in the line, and even sitting in 21st position, she’s worried about missing out on her preferred units.

“There’s only around 130 units available, and each person is allowed to buy two suites, so I don’t know if everyone in front of me is each buying two,” she said. “If they’re each buying two, I’m technically in 42nd position.”

Montrose Square is offering a $5,000 “Thank You Credit” to anyone who puts down a deposit on Saturday, incentivizing buyers to stick it out through the cold nights and hot days.

Even then, Tong wasn’t expecting to spend three nights camped out on the side of a road in southside Port Coquitlam.

“I thought [the line would start] Thursday night, and I would take one day off of work,” she said. “I didn’t think I would have to be here three nights and spend two full days here, and now I’m worried that I still won’t get my unit.” 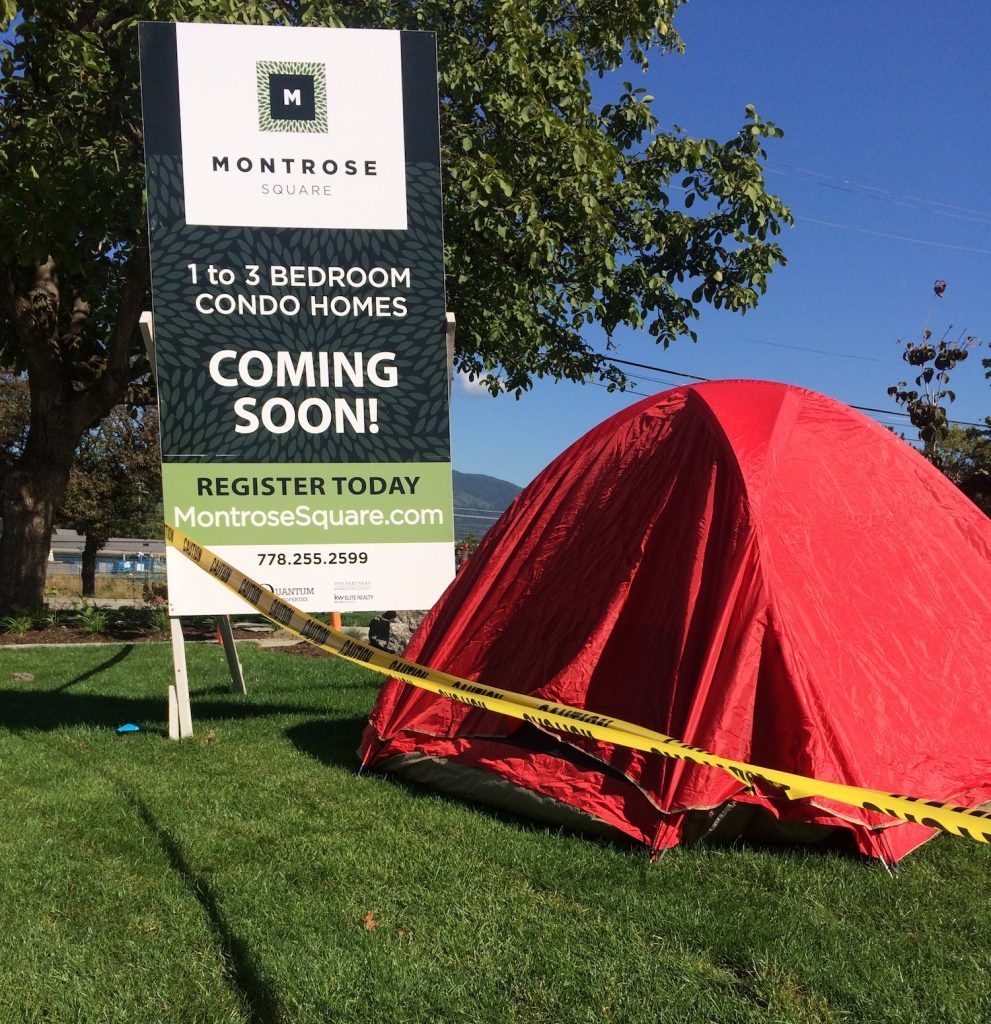 Tong said that there are roughly 60 people camped out for the pre-sale. (Dana Tong)

Tong said the line is filled with realtors and proxies – people paid by potential buyers to wait in line – though there are also people like her looking to buy a place of their own.

She even said a man driving by stopped to ask about the lineup, and gave her and her boyfriend kudos for jumping on the opportunity.

“He said, ‘I hope you get it, people like you who are young and trying to get your foot in the door in the market should be going for things like these, not all investors and just people who are going to rent it out.'”

Tong still has one night ahead of her before sales start at noon on Saturday, but remains hopeful the door will still be open when she reaches it.