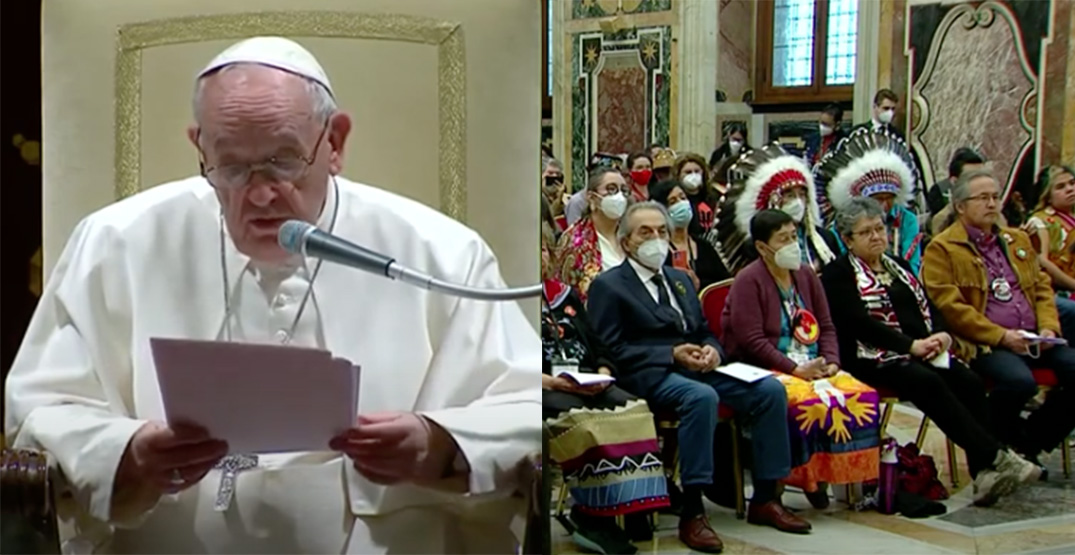 Pope Francis has apologized to a Métis, Inuit and First Nations delegation for the Roman Catholic Church’s hand in the residential school system in Canada.

The formal apology follows a week of meetings and discussions between the Pontiff and the delegation.

“I also feel shame…sorrow and shame for the role that a number of Catholics, particularly those with educational responsibilities, have had in all these things that wounded you, in the abuses you suffered and in the lack of respect shown for your identity, your culture, and even your spiritual values,” said the Pope in a final, livestreamed gathering in Rome on Friday morning.

“All these things are contrary to the gospel of Jesus Christ for the deplorable conduct of these members of the Catholic Church, and I ask for God’s forgiveness. I want to say to you with all my heart; I am very sorry,” he added.

One hundred and seventy Indigenous residential school survivors, elders, knowledge keepers, youth and community leaders were in attendance. The Holy Father expressed his admiration for Indigenous culture, spirituality, and languages and acknowledged the “great harm” that was done to their identity and culture.

These “schools,” which existed from the 1870s to 1997, were run by the Roman Catholic Church and funded by the Canadian government.

The Pope added that he joined the Canadian bishops in asking for the delegation’s pardon. He ended with a promise to visit the First Nations in Canada, something that has been requested by residential school survivors, but joked that he probably wouldn’t be going in the winter.

“Until we meet again in Canada, where I will be able better to express to you my closeness,” said the Pope. “In the meantime, I assure you of my prayers, and upon you, your families and your communities, I invoke the blessing of the Creator.”

Following his apology were prayers in several Indigenous languages, songs, drumming and dance. Pope Francis was gifted with regalia to close out the meeting and said “bye-bye,” which drew laughter from the crowd.

“It’s a historic first step,” said Assembly of the First Nations N.W.T Regional Chief Gerald Antoine in a press conference following the apology. “However, only a first step…the next step is for the Holy Father to apologize to our family at their home.”

Indigenous people are taking to social media to share their thoughts on the apology.

Many say it’s been a long time coming.

FINALLY…an apology from Pope Francis to the Indigenous Community.

The Pope actually voicing “I’m sorry” to our People in the Vatican is an extremely important step to preparing an official announcement by the Vatican. Here’s to being hopeful to a full apology in July during the Pope’s visit to Canada.
We need to hear this!

Others say an apology isn’t enough.

“All this talk about the Pope’s so-called apology and “healing” is triggering, to say the least. It’s like some people think the horrors the Church committed weren’t serious,” one person tweeted.

For my own mental health, I an Indigenous person have to log out of twitter for today. All this talk about the Pope’s so-called apology and “healing” is triggering to say the least. It’s like some people think the horrors the Church committed weren’t serious. #cdnpoli

I’m not going to go to bat for Pope Francis or the Catholic Church, but @ Ch Jesus Christ and its leaders haven’t made an apology like this in my lifetime that I’ve been aware of and I think that is very telling/wrong.

Earlier this week,  Métis residential school survivors, community leaders and youth shared their stories with the Pope and listed their demands for a path toward reconciliation.

Cassidy Caron, Métis National Council president, stressed that they don’t just want an apology but for those words to be followed by actions aligning with truth, reconciliation, justice and healing.