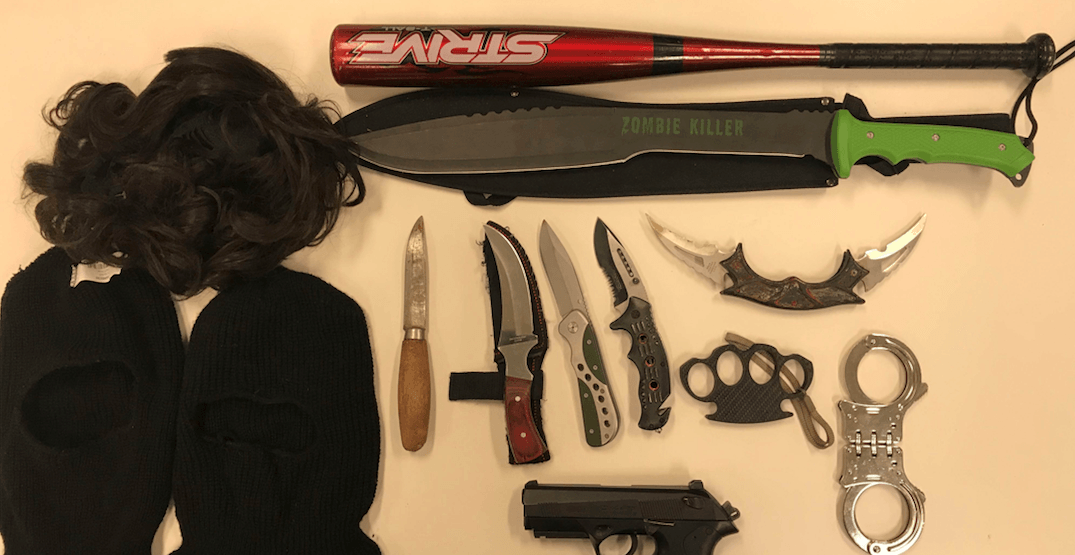 Poice say these weapons were found in the trunk of a car driven by an Abbotsford man arrested on a Canada-wide warrant. (Transit Police)

An Abbotsford man allegedly had a full arsenal of weapons with him when he was arrested in Surrey by Transit Police recently.

On Friday, Transit Police released more information about an arrest that took place on February 5, in the 100 block of 132nd Street.

The case began after officers – who were travelling between SkyTrain stations – pulled over a car with expired insurance.

After providing an alias and fraudulent identification, the driver was identified as 42-year-old Albert Edgar Fontaine, who is wanted on a Canada-wide warrant for parole revocation.

The warrant stemmed from 2016 charges for Kidnapping and Use of an Imitation Firearm, via the Penticton RCMP.

Police also determined that Fontaine is a suspended driver and is bound by several court imposed conditions, which include a 10 pm curfew and a weapons prohibition.

Following his arrest, police allege that a search of the vehicle found a number of “items of concern,” which included numerous knives, a machete, a baseball bat, a wig, ski-masks, handcuffs, a set of brass knuckles, and a “Beretta” airsoft pistol replica.

Already “well-known” to police, Fontaine has now been charged with three new offences as a result of this incident.

“We are pleased the court has recognized the importance of holding this individual in custody while judicial proceedings into his alleged crimes are underway,” said Transit Police Deputy Chief of Operations, Ed Eviston. “Keeping our transit system and our community safe remains our number one priority.”