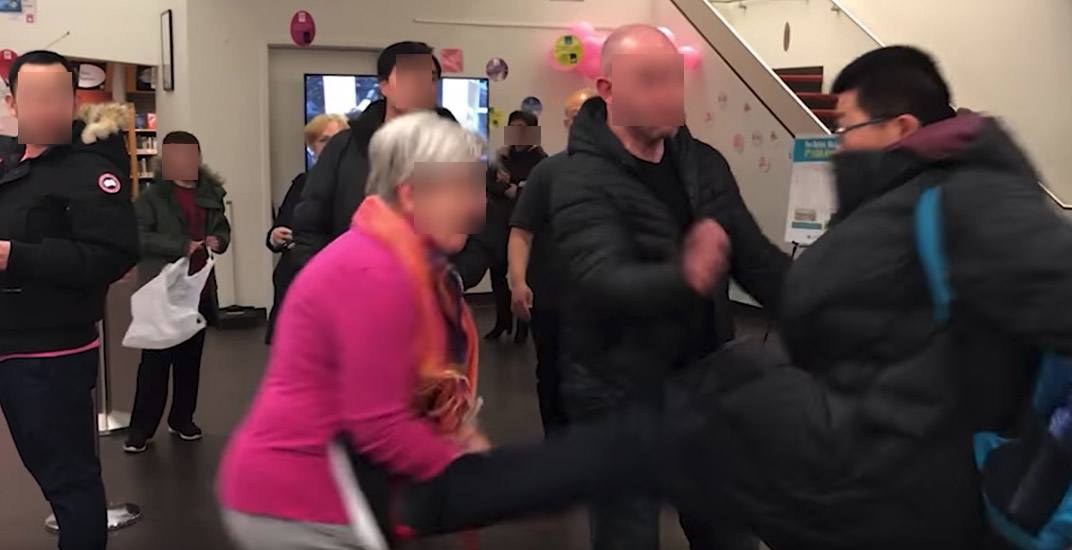 Richmond RCMP are investigating after a woman in her 60s was assaulted at Richmond Public Library on Wednesday evening.

The incident reportedly took place just before 5:30 pm, while the library was hosting an open house for a housing project for the homeless.

A man, believed to be in his mid-30s, allegedly kicked a staff member who was knocked to the ground as a result.

The suspect then fled the scene, and is currently at large.

The victim, a woman in her early 60s, was not seriously injured.

Video of the incident was recorded and posted onto YouTube.

Warning: This footage beginning at the 29-second mark may be disturbing to some readers.

Police described the suspect as Asian and clean shaven. He was wearing a black puffy ¾ length winter jacket, along with dark pants, and dark, “Converse-style” sneakers. He was wearing glasses and carrying a backpack.

“We are looking to swiftly identify, locate, and arrest this suspect,” said RCMP Cpl. Dennis Hwang. “The suspect may be unrelated to the community event and may possibly be a regular at the library or the surrounding area.”

Police know “there were many potential witnesses that will have valuable information to share with us,” added Hwang. “Anyone with information as to the identity of the suspect or his whereabouts is asked to contact us immediately.”

Anyone with information on this incident is asked to call police at 604-278-1212 or, email them at: [email protected]

Those who would like to leave an anonymous can do with CrimeStoppers by calling 1-800-222-TIPS (8477), or leaving a tip online at solvecrime.ca.