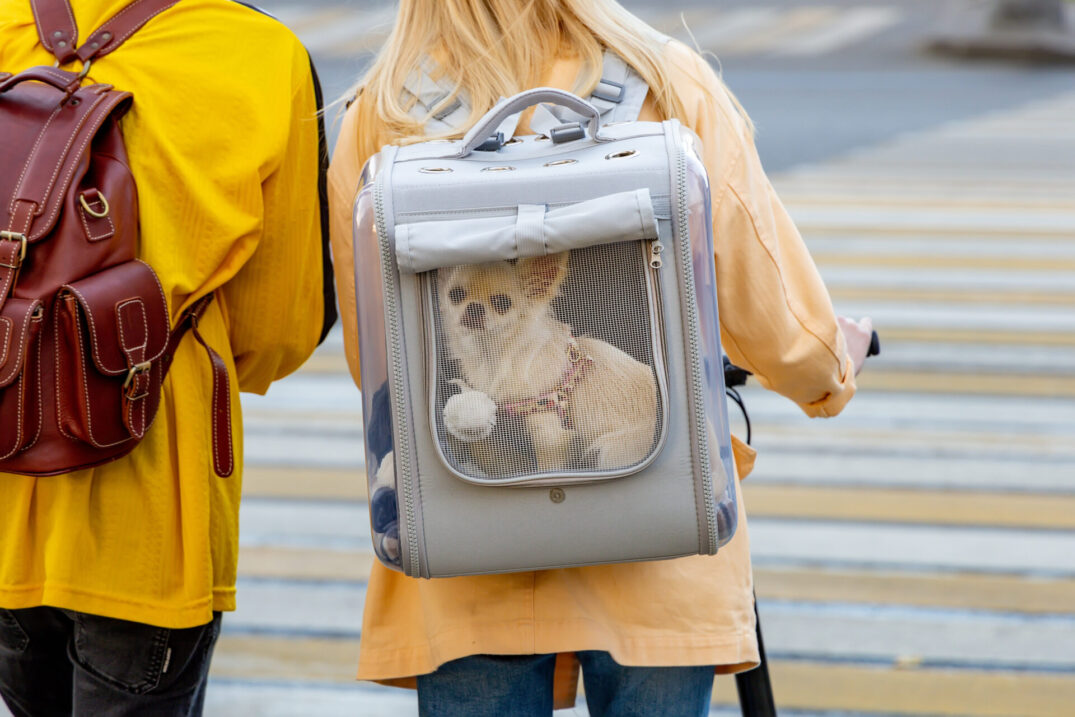 As long as a dog does not bark, growl, or lick other passengers, what’s the problem with them riding with their owners on transit? That’s the argument hundreds have agreed to, prompting them to sign a petition urging TransLink to update its pet policy.

Portia Zaffaroni, a pet owner in Metro Vancouver, has organized a petition that has garnered over 2,000 signatures to create some more flexibility in the policy.

Zaffaroni moved to the Lower Mainland from Vancouver Island last year and planned to rely on transit to get around the region. However, she says this became almost impossible since she was not able to bring her 16lbs dog, Roxy, with her on transit.

“[Roxy] kind of goes everywhere with me for the most part because there’s actually so many places in Vancouver that are dog friendly,” she tells Daily Hive. “I can take her into almost any store, any place as long as they don’t serve food. Not that I can’t leave her home by herself … But why would I leave her content confined to my apartment? To just basically stare at the four walls when she can come out and join me in live her best life?”

Zaffaroni argues, considering the number of dog owners, these folks are limited in how they can get around Metro Vancouver.

“[Vancouver] can be very difficult when you’re spending so much money just covering trying to cover your basic costs. So I was hoping to use transit to be able to get around more,” she says. “Public transit should be available to everyone.”

She says owners are left with few options when taking their dog to the vet or groomer. She says it even makes it difficult to take part in visiting outdoor pet-friendly parks, hikes and areas.

She adds, only allowing small animals on board that fit into these enclosed carriers is “unreasonable” considering owners will then need to find other travel accommodations.

TransLink allows provincially-certified service animals or small pets if they are in a fully-enclosed handheld cage.

Zaffaroni’s goal is to amend TransLink’s pet policy to resemble the New York City Pet Policy to which allow pet to be carried in a carrier (like a backpack or tote bag) as well.

“A plastic or metal crate doesn’t really give [Roxy] enough room. She would have to be lying down … for the duration of the whole trip. She wouldn’t be able to move around much. And it gets warm. obviously quite claustrophobic, like being stuck in shoved into a closet, like a very small closet and not really being able to move and it seems a bit silly that we can’t amend the policy to reflect other policies around the globe.”

On New York City Transit and MTA buses small domestic pets can be carried in kennels or similar containers that fit on an owner’s lap. The pet should not be a bother to other passengers.

However TransLink clarified in an email statement to Daily Hive Friday its policy includes enclosed backpacks and bags.

“It is reflective of pet policies in place at many other transit agencies in Canada and the US.”

Zaffaroni disagrees with TransLink, claiming in her research, that a number of cities in North America have much different pet policies. She says TransLink’s policy “is not good enough.”

“Policies throughout North America and Europe which has — a much higher density of population, as well as a much higher ridership — actually allowed dogs to not only be in carriers that are not fully enclosed like a backpack, but also allow dogs to walk on a leash with a mussel or without a mussel depending on their policy,” she says.

During peak travel hours on transit, Zaffaroni says she would also understand if TransLink wanted to create conditions around its policy if they update it with her suggestions. She emphasizes, she is flexible.

“If they want them to travel not during rush hour, I think that’s an appropriate compromise, if they’re concerned about space,” she says. “A dog that can fit in a backpack is also going to limit the size of dogs that will be coming on because the dog has to fit in backpack. Now I would love to be able to have TransLink allow a dog to walk on a leash. But we’re starting with baby steps here, which is can we just allow dogs and backpacks and then we can go from there.”

In 2018, a New Westminster woman presented a proposal to its board of directors, hoping that TransLink would extend its current pet policy.

TransLink considered the idea but ultimately decided there not be a change to the policy for pets travelling on Metro Vancouver’s public transit system.

Zaffaroni’s goal is to collect signatures in hopes it will be featured in recommendations for TransLink’s Board of Directors.