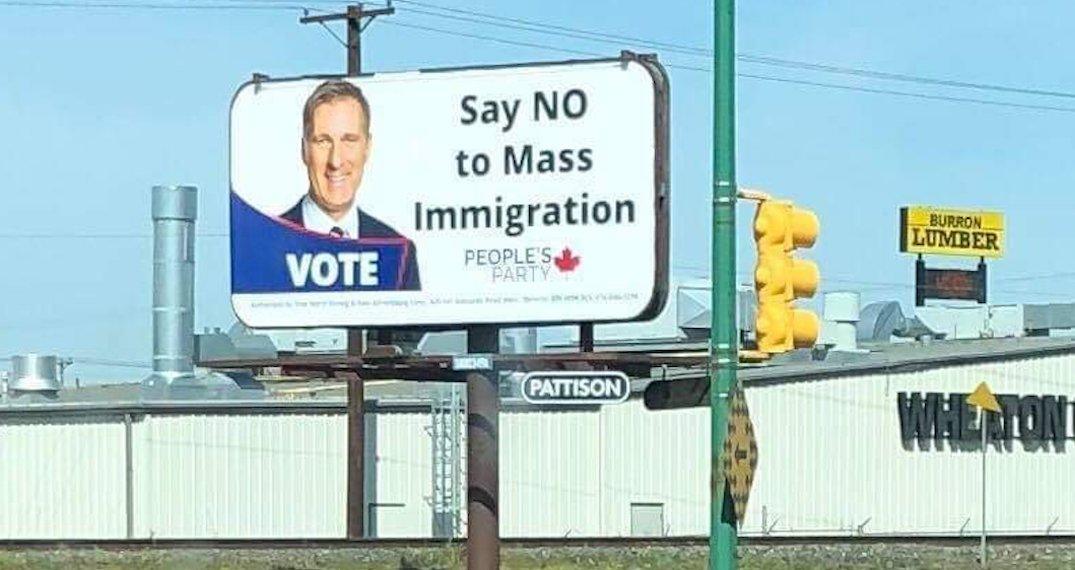 The company that owns billboards used to promote the People’s Party of Canada’s stance on immigration says the ads will be taken down following “overwhelming” criticism over the weekend.

The ads, which feature a photo of PPC leader Maxime Bernier, read “Say NO to mass immigration” and a call to vote for his party, started popping up across the country last week, with billboards appearing in Vancouver, Toronto, Halifax, Quebec, and Saskatoon.

Soon after going up, the ads received backlash online from the media, Canadians, and political leaders, saying the billboards are anti-immigrant.

Numerous petitions were launched over the weekend calling for the billboard’s owner, Pattison Outdoor Advertising, to take the ads down, saying that the PPC’s are “campaigning for an extreme crackdown on immigration,” and reminded Canadians of the party’s promise to build barricades along our borders.

Randy Otto, president of Pattison Outdoor Advertising, said as a result of the criticism the company received over the weekend, they will be informing the company that placed them, the True North Advertising Corp., on Monday that the ads will be removed as soon as possible.

He added that the billboards didn’t violate any policy and they followed the company’s protocol as outlined in the advocacy advertising guidelines on its website.

“It was never my or Pattison Outdoor’s intention to offend, alienate, or in any way insult the public by allowing this ad to be run,” company president Randy Otto wrote, adding that the company would review its advocacy guidelines.

He said that neither he nor anyone else at the company endorses the message of the advertiser.

Following the billboard’s backlash, Bernier said that the billboards are coming down after “censorship calls from the leftist mob.”

The billboards will be removed after censorship calls from the leftist mob.

The PPC is the only party that rejects mass immigration and proposes to have fewer, better integrated immigrants who fulfill our economic needs.

What do you think? Vote and RT. https://t.co/YANzKkJj8c