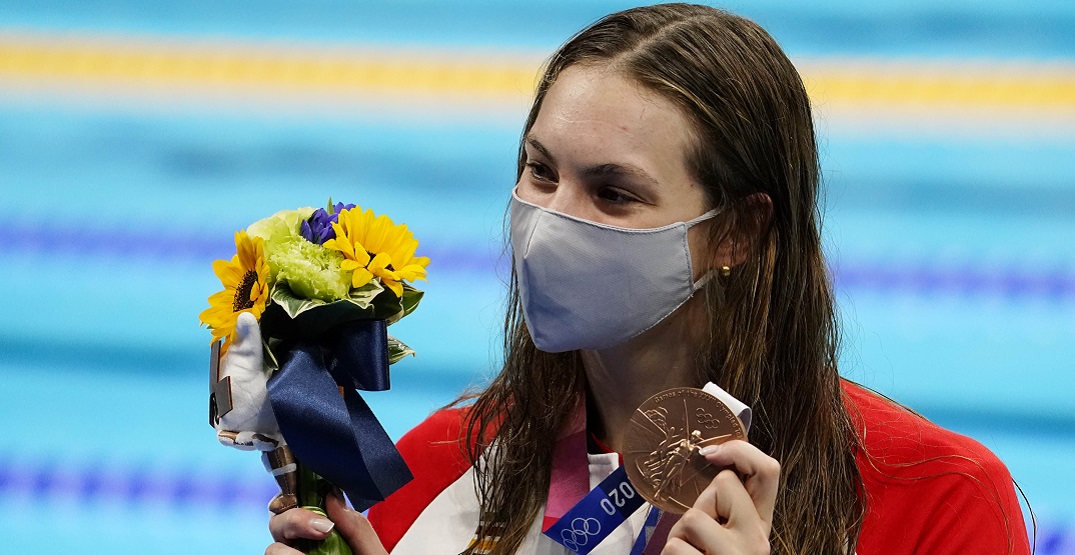 Penny Oleksiak made Canadian history this weekend, with her seven career Olympic medals being unmatched by any other athlete.

After a haul of four medals as a 16-year-old in the 2016 Rio Games, Oleksiak returned with three more appearances on the podium in Tokyo.

Here’s how each of her record-setting seven medals went down:

The first of Oleksiak’s medals came alongside Sandrine Mainville, Chantal van Landeghem, and Taylor Ruck in the 4×100 freestyle relay. With a Canadian record time of three minutes, 32.89 seconds, Oleksiak’s final leg powered Canada to the bronze.

The very next night, Oleksiak won her first individual medal in the 100m butterfly final with a time of 56.46 to finish in second place.

Katerine Savard, Taylor Ruck, Brittany MacLean and Oleksiak placed in another relay event, this time in the 4×200 freestyle race with a time of 7:45.39.

The pinnacle of Oleksiak’s Olympic performances to date, her shock gold in the 100m freestyle final back in 2016 all but cemented her place as a Canadian Olympic legend.

Oleksiak was a part of Canada’s first Olympic medal for the second Games in a row, improving on the 2016 performance with teammates Maggie Mac Neil, Rebecca Smith, and Kayla Sanchez. In Tokyo, Canada finished with a time of 3:32.78, just barely beating the country’s mark in Rio.

Most recently, it was another team event for Oleksiak that saw her pick up the record seventh medal, with a time of 3:52.60 to finish third on the podium in the medley relay.