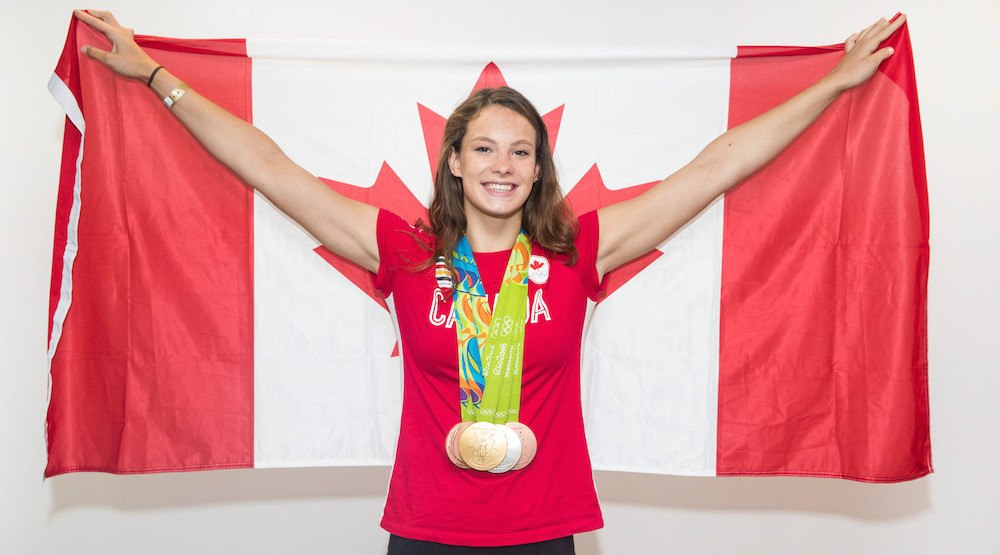 Was there ever a doubt?

Penny Oleksiak, the first Canadian to ever win four medals in a single Summer Olympics, has been chosen as Canada’s flag bearer for tonight’s Olympic Closing Ceremony (3 pm PT/ 6 pm ET on CBC).

“This entire experience is a dream come true,” Oleksiak said. “I never expected any of this, and now I’ve been given this honour of carrying the Canadian flag into the Closing Ceremony. I’ve never been more proud to be a Canadian.”

“I’m super honoured just to be able to carry the flag for Canada and get to lead out all these athletes who have worked so hard to get here.”

In just about any other Olympics, Andre De Grasse would have been an easy choice as flag bearer. He won a silver and two bronze medals in three of the most high profile events in the Games. Gold was out of the question of course, as he had the misfortune of lining up against the greatest Olympian of all-time, Usain Bolt, in all three races.

Another option was Richmond, BC’s Evan Dunfee. Dunfee is the race walker who was bumped out of the bronze medal position, literally, during the final stretch of the 50 km race. Dunfee, in an incredible show of character, refused to carry through with a protest because his conscience wouldn’t allow him to.

Canada tied a national record for most medals won in Rio (22) at a non-boycotted Summer Olympics, equalling the mark recorded in Atlanta in 1996.

“I know that Canadians are proud of what Team Canada accomplished here in Rio,” Team Canada’s Chef de Mission, Curt Harnett said. “Our athletes competed with heart, courage and grace, and showed the world what it means to be Canadian. Nobody showed this better than our Closing Ceremony Flag Bearer, Penny Oleksiak. Congratulations on this honour, Penny – you deserve it.”