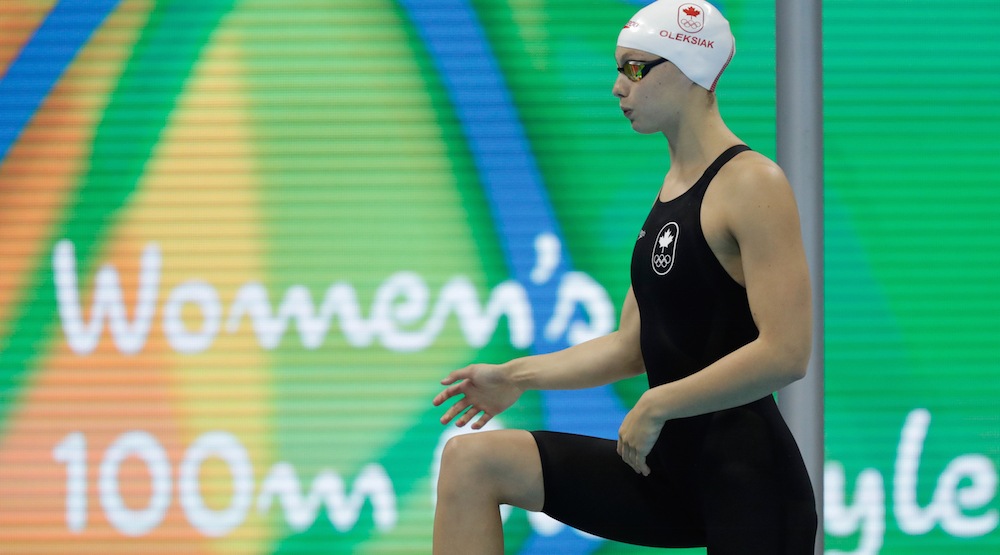 Just six days into the Rio 2016 Olympics, a star has emerged for Canada, and she’s just 16 years-old. Here are 16 facts about Canadian Olympic hero, Penny Oleksiak.

Penny had her sweet 16 birthday just 59 days ago!

2. Her nickname is ‘The Child’

Oleksiak and her teammate Taylor Ruck – who she won a pair of bronze medals with in the relays – are the first two Canadians born in the 2000s to win Olympic medals. Ruck was born on May 28, 2000 in Kelowna, just 16 days before Oleksiak on June 13, 2000 in Toronto.

My face when I remember that I have actual school tomorrow.. pic.twitter.com/dCV8xWqPwb

5. She travels with a grey blankie

It’s her good luck charm, according to her bio on the Canadian Olympic Committee website.

6. She has already tied a Canadian Summer Olympics record

She’s got a great chance to break the all-time record for medals by a Canadian, six, which is shared by Klassen and Clara Hughes.

Remember all those Olympic projections you saw before the Games began? Few were relying on Oleksiak racking up medals.

Here’s what was written about Penny in the National Post on July 31:

“A medal for Oleksiak, the Canadian record holder in women’s 100m fly and 100m free, is not anticipated. It is not out of the question, however, especially considering the explosive youngster should have a leading role on the women’s 4×100 free relay squad, a fringe medal contender.”

8. She didn’t compete at the Worlds last year

A big reason why expectations were low was because she didn’t compete at the World Championships last year because she’s so young. She’s come a long way in a short time.

10. She turned heads at the Olympic trials

Oleksiak set a Canadian record in the 100-metre bufferfly and 100-metre freestyle at the Canadian Olympic trials.

11. She’s had to overcome growth spurts

Penny has had some growing pains. Literally.

She’s 6-foot-1, so you can imagine how her coordination suffered in recent years. That meant that her swimming also suffered.

“I remember having a really tough time,” she said. “I thought I was in a good spot, then I hit a growth spurt and all of a sudden I was in a huge mess.

Most swimmers hit their peak in their mid-20s. If that holds true with Oleksiak, expect her to be at her best at the 2024 Olympics.

When CBC’s David Amber told her she’s the first Canadian to win three medals in a Summer Olympics since 1984 she said:

“It means a lot to me. I don’t even really know what to say because I don’t really feel like it’s just me that’s like making history I guess – which is what some people are even saying – which kind of freaks me out. Two of the medals that I have are because of so many other girls. I definitely just want to share this experience with them. It just means so much to me.”

Her older brother Jamie is a defenceman in the NHL with the Dallas Stars. Her other brother (Jake) played NCAA hockey and her sister (Hayley) rows for Northeastern University.

15. Penny was only 11 when Canada stopped making the penny

I think we should put these back into rotation for the duration of the #Olympics #Oleksiak 🇨🇦 pic.twitter.com/HTdbn4bVOl

16. She’s got a chance at gold tonight

Penny is going for her fourth medal of Rio 2016 tonight in the 100-metre freestyle final, and considering her qualifying time was just 0.01 behind the leader, she’s got a great chance to make it a gold.