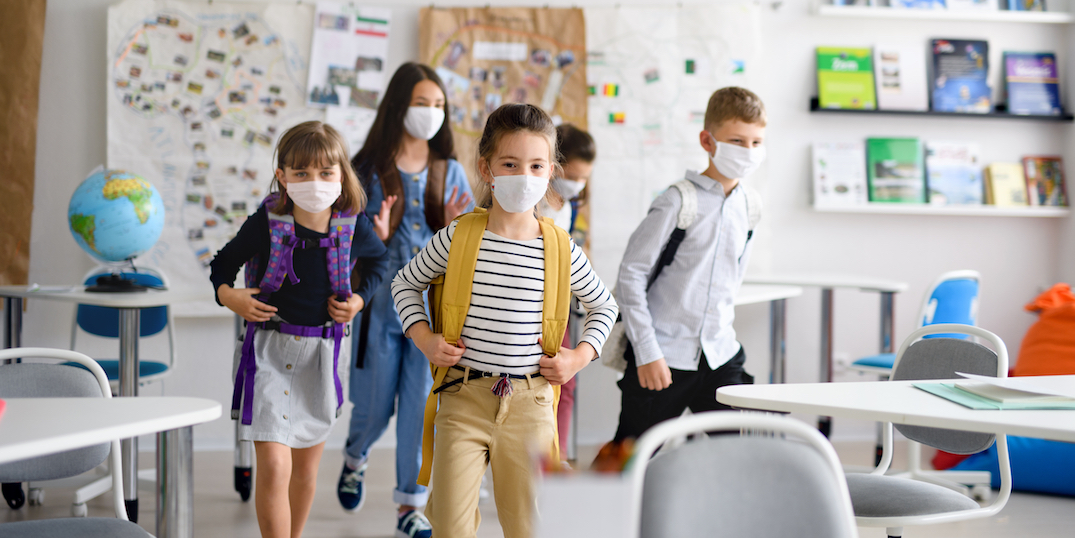 Dr. Bonnie Henry announced Friday she’d changed her mind and was mandating masks inside schools for all grades, including kindergarten to Grade 3. Previously, she’d only required them for grades 4 to 12.

Dr. Henry tried to put the best spin possible on her move Friday, denying the public had lost confidence in her back-to-school measures.

“I don’t believe that at all,” she said. “We’ve been monitoring the data. I’m not the only person who makes these decisions. It’s something a large group of people are working on, public health in partnership with the school districts, parent advisory committees and others.”

But two of those groups — parent advisory committees and school districts, in BC’s largest population centres — had broken ranks with Dr. Henry in the last few days, announcing they would act if she would not expand the mask mandates.

The collapse of support from key education partners forced Dr. Henry’s hand, and Friday’s press conference was mostly about crafting an artful and face-saving retreat.

It was particularly awkward given that Dr. Henry had defended not changing the mask mandate just three days earlier, when specifically asked about districts disagreeing with her stance and striking out on their own to address the concerns of parents.

Henry didn’t see it that way though, and when asked about the contradiction, she said she had intended to give the impression that she was considering such a move.

“I indicated, I thought, quite clearly on Tuesday these were things we were looking at,” she said.

The reversal is a rare backdown by the BC government and Dr. Henry, who more often than not tend to push through concerns and anxiety on public health measures in pursuit of a larger and longer-term goal backed by the science and data.

Parents only have one concern: whether bundling their kids out the door to classes in the morning is the right thing to do, in the face of rising case counts.

Those parents built up a grassroots movement through parent advisory councils in Surrey, Vancouver, Sooke, New Westminster, and Burnaby, which wrote a joint letter last week blasting the government for not doing enough to protect kids in schools. They demanded the province make masks mandatory for kindergarten to grade 3 students, reinstitute remote learning options for hard-hit schools, improve classroom ventilation and mandate vaccinations for teachers and school staff.

“Our organizations are asking for stronger minimum requirements to protect our children given the rapid increase in COVID cases since the return to school,” they wrote in the letter.

That letter set off a fuse that would burn through three major school districts in the following days.

The Vancouver School Board was the first to react, passing September 24 a motion to make masks mandatory for all grades. That was followed by Surrey and then Burnaby, with each district saying they were making the change to protect children whether it was part of the province’s official back-to-school safety plan or not.

But all of the anxiety about masks distracted from a larger and more important point Dr. Henry has tried repeatedly to make throughout the last week: that just because cases of sick children spiked as soon as schools reopened this month, doesn’t necessarily mean lax public health rules inside those schools are causing transmission.

Other experts agree, saying blaming schools for transmission is not pointing the finger at the actual problem.

“We weren’t surprised to see more children sick, we recognized this was going to take place once they go back to school,” Dr. Ran Goldman, a Vancouver pediatrician and professor at the University of BC, said in an interview with Daily Hive.

“What I am concerned about is I’m not sure all those kids we’re seeing are sick because of schools and contracting it at school. We need to look at where those children are and whether the population around them, the grownups or parents, are vaccinated, because I think we may find some of this school-age illness is not from school. And I’m concerned about that.”

Dr. Henry spent almost an hour in her latest public briefing pointing to new statistics that show infections amongst children were already on the upswing before school started in areas like the interior and north, where vaccination rates are the lowest in the province.

“But it is important for us to continue to watch this and to pay attention to make sure we’re not seeing more severe illness as well.”

Despite more cases, BC has not yet seen an increase in hospitalizations or deaths amongst kids.

But that has not blunted a pushback from parents, districts and the BC Teachers’ Federation, which have linked rising case counts to BC’s back-to-school plan, and even after the reversal Friday by Dr. Henry on masks continue to push for wider changes.

Henry has countered by saying the rate of infections for children is directly linked to the rate of vaccination for the adults in their lives, meaning the best way to protect kids is not necessarily to clamp down with more rules at school but to vaccinate as many adults as possible to slow the community spread around them.

Henry said things will improve once Health Canada approves vaccines for children younger than 12, because BC data has shown a steep drop-off in infection rates among teenaged kids who’ve been vaccinated. That could happen by the end of October.

“We know schools are really important for growth, social interaction and learning — it’s really a must,” said Dr. Goldman.

“We need to have children go to school. So ensuring we at least as adults are vaccinated around them is going to be critical.”

“There’s a balance of the importance of this, that we know is critical for the growth of children and development, and the rare chance of catching COVID or having complications from COVID,” he added.

“I think at this point school is more important.”

Still, there are clearly more stressful times ahead for parents and students as BC battles the fourth wave of COVID-19 and the Delta variant.

Children are increasingly getting sick with other illnesses, leading to a sharp spike in COVID tests as parents struggle to figure out if their child has the coronavirus or just a cold.

Yet it can take days to book a COVID test in BC, depending on where you live, and the confusion between COVID and a cold is likely to only get worse as the province enters the regular flu season.

Henry has said sick kids need to be kept home until they are tested. Her critics want BC to better embrace the rapid tests it has been given from Ottawa, as well as take-home rinse and gargle test kits that the province has yet to fully embrace.

All of the arguing and confusion is enough to cause most parents to tune out entirely.

Some might even view the situation as a hopeless mess.

But Dr. Henry said she remains optimistic the vaccination rate will continue to rise, and combined with vaccines for younger kids being approved as early as this fall, the situation will improve.

“This is not something to be defeated about,” she said. “This is something that we have the agency, we know what we need to do to address.”