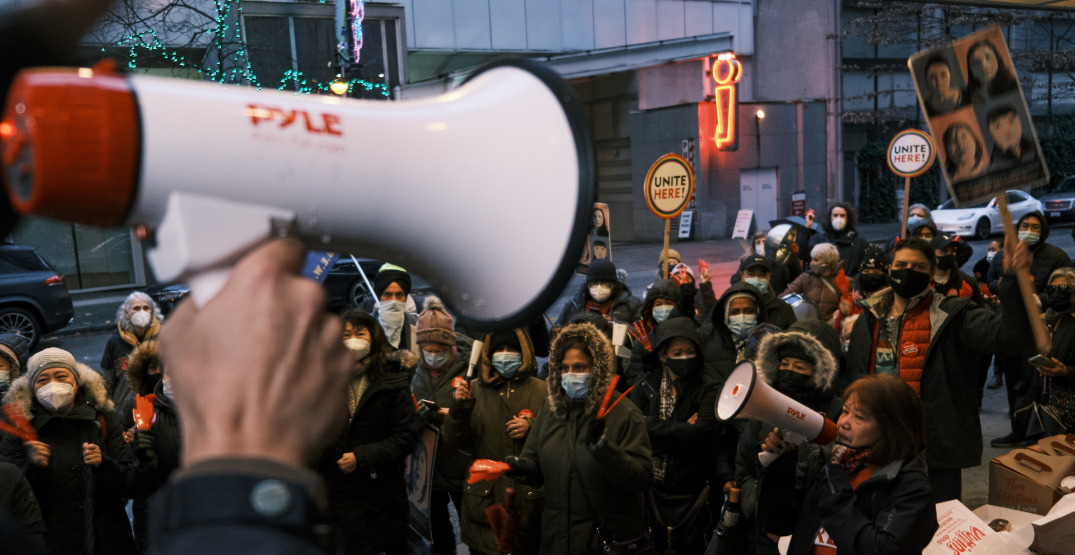 A demonstration held by the union that represents hotel workers. (@UniteHere40/Twitter)

Pan Pacific Vancouver is facing a class-action lawsuit that has received the green light from a BC Supreme Court judge.

One of the allegations against Pan Pacific is that workers were wrongfully fired during the COVID-19 pandemic. This claim was brought forward by UNITE HERE Local 40, the union that represents hotel workers.

The union also alleges that the hotel misled employees, giving employees who were fired false hope of eventually getting their jobs back.

The lawsuit in question was filed by a former hotel employee who worked at Pan Pacific for 24 years before being terminated last August.

“The class action will represent all regular hourly employees of the Pan Pacific as of February 20, 2020, whose shifts were cancelled on or after that date,” reads a statement from the union.

Plaintiff Romuel Escobar claims that the hotel misled workers, wrongfully terminated them without cause or notice, and skirted the full severance pay that was owed to workers. The release from the union elaborates on this allegation.

“Between firings, the hotel also offered workers $250 to sign a contract taking away their regular full-time status to become casual, on-call workers, effectively waiving their severance rights. The hotel fired workers anyway, regardless of whether they signed.”

The union also says that Pan Pacific terminated employees in batches in order to avoid the group termination provisions set forth in the Employment Standards Act. Those provisions would have meant larger payouts to workers and forced the hotel to give employees advanced notice.

“The Court’s decision to allow the lawsuit to proceed as a class action sends a strong message to hotel employers: misleading your long-term workforce for months before mass firing them could lead to financial consequences,” said UNITE HERE Local 40 President Zalida Chan.

The union states that Pan Pacific, which is an affiliate of Westmont Hospitality Group, is one of the world’s largest privately held hospitality companies. They also suggest that Westmont received $48 million from government-funded COVID-19 relief programs “but failed to keep its workforce intact.”

UNITE HERE Local 40 says that of all the women fired from Pan Pacific since June 2020, 94% were women of colour.

The report found that in four of the five hotels, women of colour made up the majority of terminated women.

It also found that among terminated women, the highest rate of jobs lost by women of colour was at Pan Pacific Vancouver.

Daily Hive has reached out to Pan Pacific for comment.