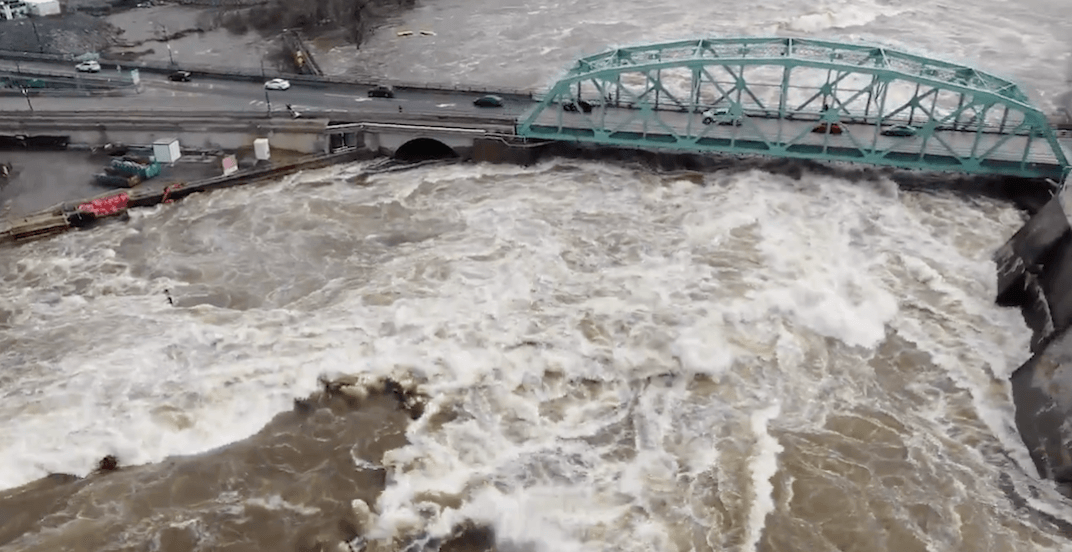 The nation’s capital remains in a state of emergency as water levels on an already surging Ottawa River continue to rise.

Over the weekend, military members were on hand to help volunteers prepare sandbags for properties threatened by flooding. Prime Minister Justin Trudeau also made an appearance to help with the emergency efforts.

According to Environment Canada, more rain is expected in the region this week, with periods of rain in the forecast from Monday through Friday.

In photos and videos shared on social media, you can see multiple roads in Ottawa washed out by rising water levels.

Additionally, the Chaudière Bridge was closed to traffic on Sunday due to high water levels.

Currently, Montreal and Ontario’s cottage country also remain under a state of emergency, and the army has also been to assist with emergency efforts in the communities of Huntsville and Bracebridge.

@JustinTrudeau has come ready with his rubber boots and gloves to fill some sandbags while he is on site at Constance Bay. He also brought his kids to help out. Thank you for showing your support here in Ottawa.#OttCity #ottnews #ottawaflood pic.twitter.com/zmPpAwZwXg

More footage of flooding on the Ottawa River today. Already at record levels and 64 cm on the way. pic.twitter.com/G7Sg6vIkAj

It is crazy indeed. When you realize that most of the club harbour and the Village of #Britannia is already below current water level, you really want those walls to hold! #ottawaflooding pic.twitter.com/hPoA0KoF49

Officials have declared a state of emergency pic.twitter.com/ruatefIRwv

Update from my parent’s house. The water level rose again & is now almost at their house. Expected to rise another 14”. 😲

This is surreal. If you see my previous Tweet, you’ll see how far the house usually is from the water. 😕#ottawaflooding #OttFlood19 #OttFlood #flooding pic.twitter.com/lpitmoJB1Z

Mary Lynne and I took a drive to Clarence Rockland Township, Rockland and Cumberland to see some of devastation along the Ottawa River. Very serious situations. South Nation Conservation continues to monitor flooding in our watershed. pic.twitter.com/kziEdWmhzL

Filling up sandbags to help with the Ottawa flooding. The EOM Lions are ready to help! #ottawaflood #MoreThanRobots pic.twitter.com/yelsrFEVTv

Worked hard today! Glad to have helped out in Crystal Bay. The sense of community was strong and everyone was smiling, working hard and happy to help. #ottawaflooding #ottawa #ottawariver pic.twitter.com/1m3Wi5f4z8

Drone footage over Chaudière Falls along the Ottawa River today. This is only the second time in our 100+ year history that we’ve opened up all the spans of the Ring Dam. #ottflood pic.twitter.com/CWZiqK8nOL