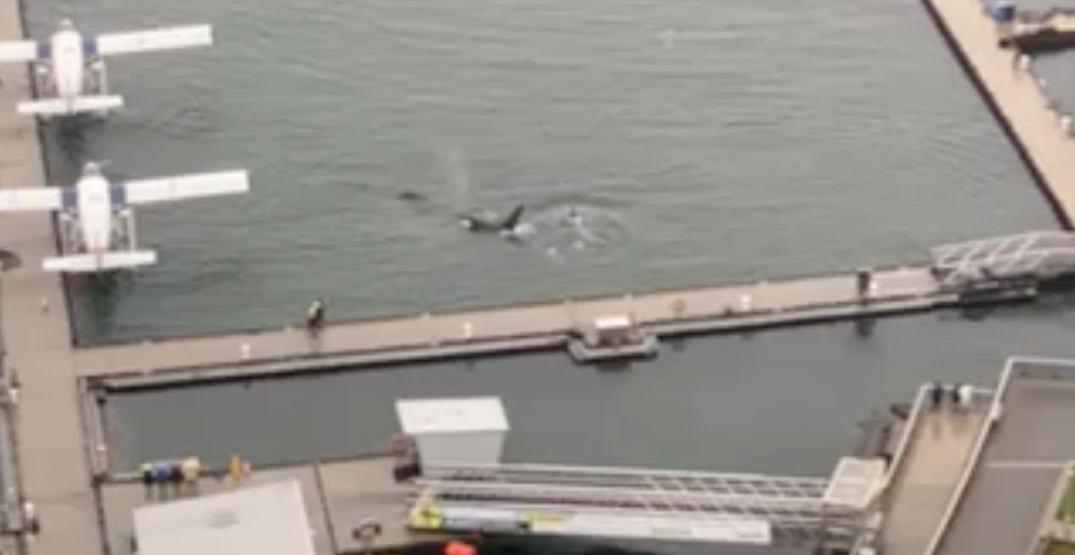 Several orca whales were sighted Saturday in and around Coal Harbour, right next to Vancouver Convention Centre’s West Building.

Footage shared with Daily Hive captures the orcas swimming around Harbour Air’s Coal Harbour seaplane terminal, immediately west of the convention centre. Whales are known to occasionally wander into Burrard Inlet, but they are rarely seen this close to the shoreline of the central waterfront in downtown Vancouver.

The individual who spotted the whales says they saw them for at least 15 minutes in front of the convention centre and seaplane dock.

“They eventually crossed over towards Stanley Park towards First Narrows and Burrard Inlet, but they could have gone anywhere,” the spotter told Daily Hive.

“It was possible that they were here for awhile before I spotted them. I was very close to getting a photo and video of them behind the Digital Orca statue at the convention centre itself.”

Daily Hive reached out to Harbour Air, but they were unable to immediately provide a comment.

And just this past week, a lone beluga whale was seen swimming around Puget Sound in Washington State — a highly unusual sighting, considering belugas are typically known to live in arctic and sub-arctic waters, including areas northwest of Alaska’s pandhandle.