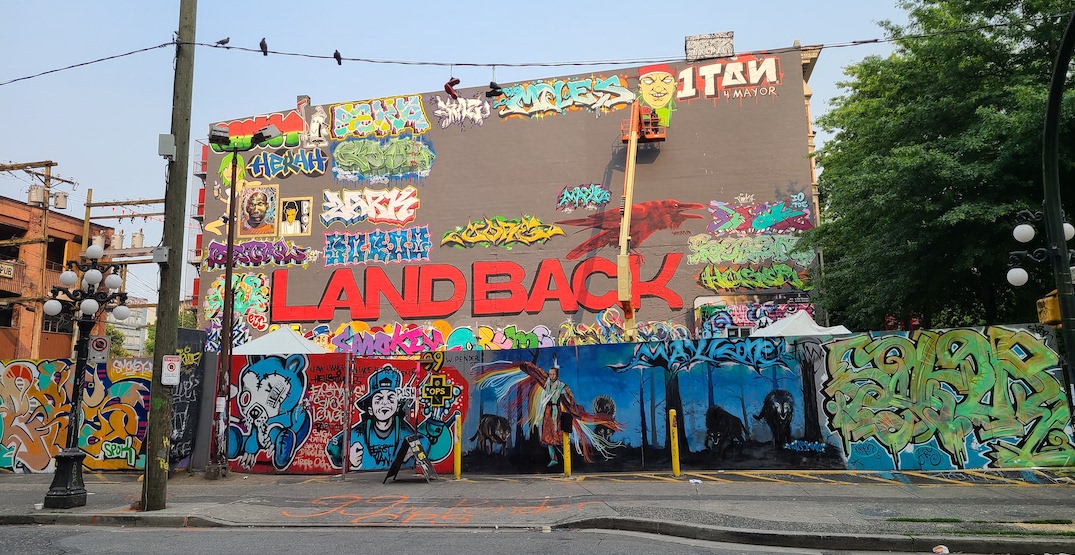 The entire barren west facade of the six-storey Arco Hotel building at 83 West Pender Street at the eastern end of Vancouver’s Chinatown district is now covered by graffiti.

Graffiti of this scope and extent is an unfamiliar sight in Vancouver, but the art on the building’s upper levels began taking shape last month.

The building wall faces Vancouver Coastal Health’s (VCH) Overdose Prevention Site (OPS) for drug inhalation, which opened earlier this year as an outdoor tented facility on the surface parking lot at the northeast corner of the intersection of West Pender Street and Abbott Street — immediately north of the International Village shopping mall. Drugs that are inhaled at this site include cocaine and methamphetamine.

Over the long weekend, Daily Hive Urbanized observed that a tall lift crane parked on the OPS was being used to complete additional graffiti on the upper portion of the building. 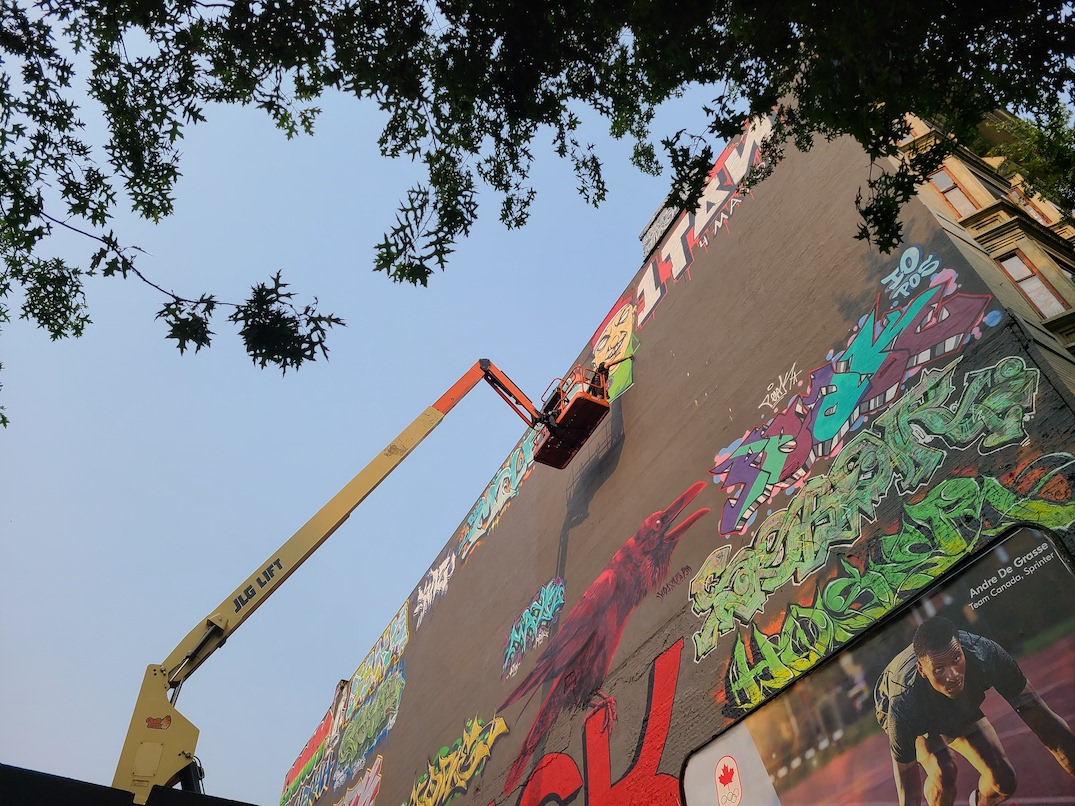 VCH was unable to comment on the graffiti. The Arco Hotel is a SRO managed by Atira Women’s Society, which approved the installation.

Downtown Eastside activists raised money for the crane lift rental through an online crowdfunding campaign, which achieved about $4,400 of its $7,000 goal.

In an email to Daily Hive Urbanized, the municipal government said the graffiti was not commissioned by the city, nor was it reviewed through its usual public art streams.

“The City of Vancouver can confirm the graffiti at the Abbott & Pender overdose prevention site was not commissioned by the City, nor was it part of the City’s public arts program, murals program, or a recipient of a public art grant,” reads the email. 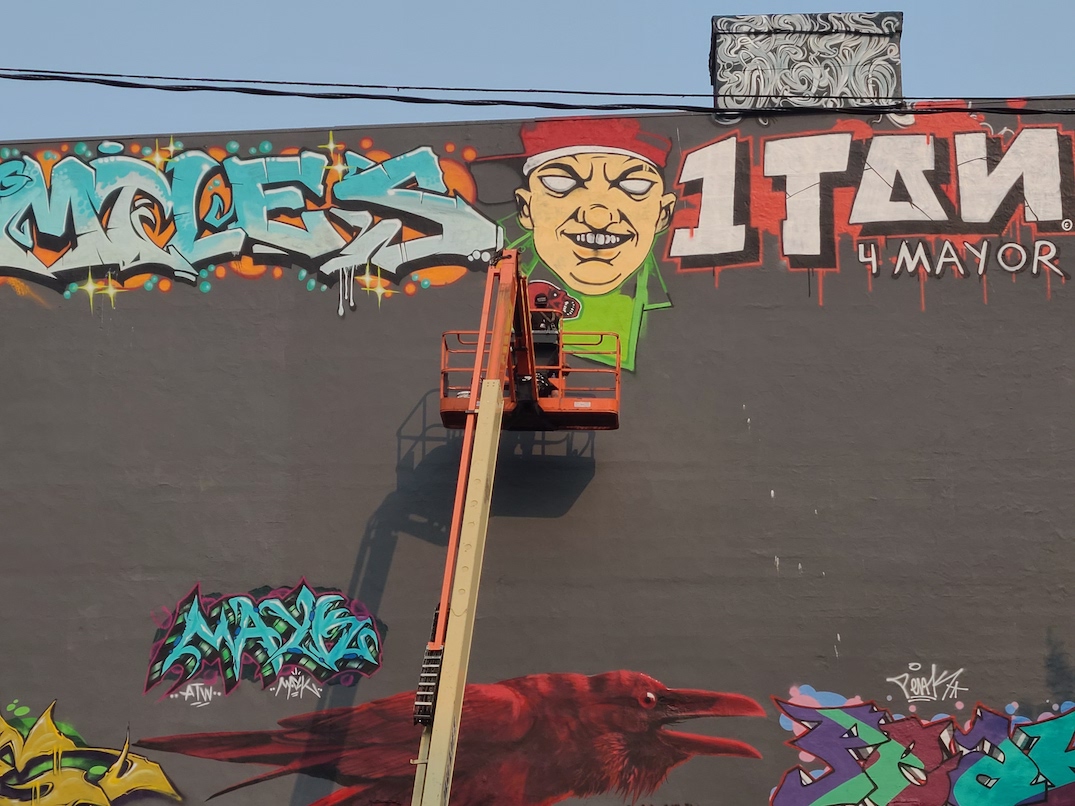 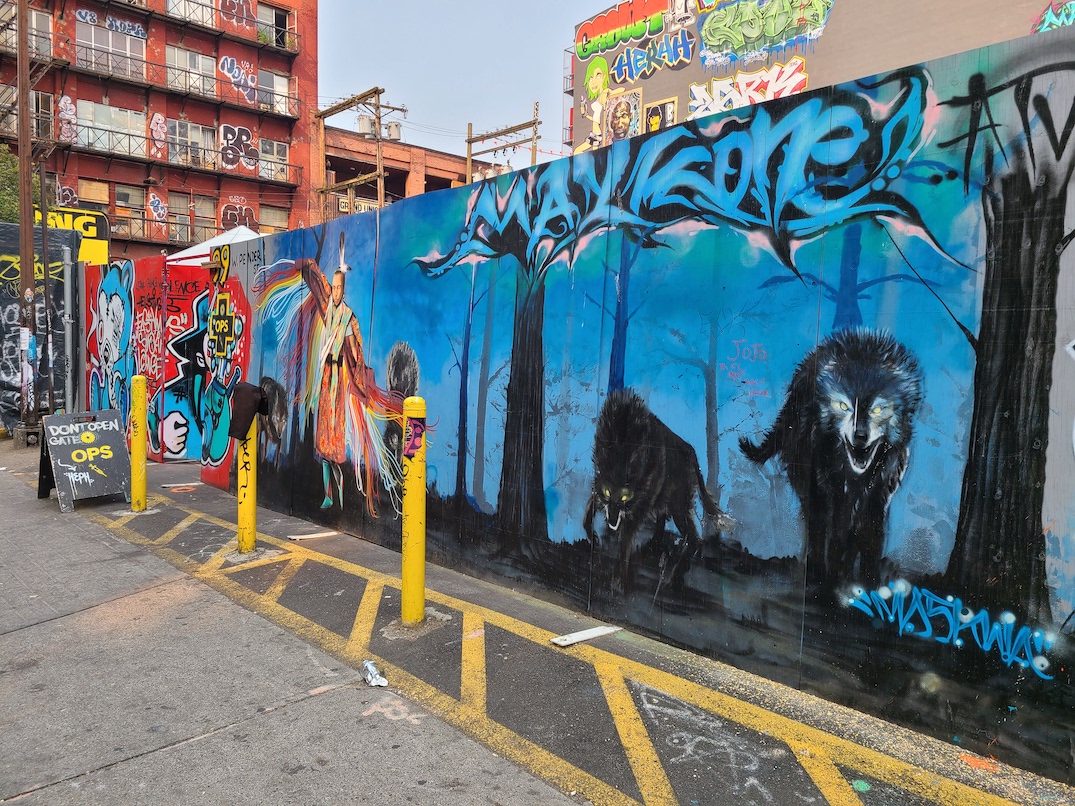 Near the mid-section of the building wall, giant red text reads “LANDBACK,” which is the name of a global campaign that seeks to reestablish Indigenous peoples’ political and economic control over their traditional lands.

Fencing that encloses the OPS has also been painted with graffiti and at least one Indigenous-themed mural.

There has been a spike in illicit graffiti and tagging across the city over the past year, especially in Downtown Eastside and Chinatown. While homeless advocates assert street art is a healthy expression of mental health, struggling small businesses have seen their cleanup costs skyrocket.

Businesses and property owners are required to comply with the city’s bylaw requiring graffiti on buildings removed within 10 days of being served a notice from the municipality. The policy states graffiti that remains after being reported will be removed and the removal cost will be billed to the property owner.

There is also a minimum fine and penalty of $500 for anyone caught doing illegal graffiti.

Just last month, Vancouver City Council approved $500,000 in funding for distribution to 22 business improvement associations (BIAs) across the city to help these organizations cover the cost of graffiti and tagging removal and repair. This includes $50,000 each to the Chinatown BIA and the Downtown Vancouver BIA (DVBIA), which have seen most of the increase in graffiti-related vandalism.

The DVBIA alone has budgeted $575,000 from its own budget this fiscal year for removing graffiti from areas within its jurisdiction.

The OPS at the corner of Abbott and West Pender streets is just one of a dozen overdose prevention sites and supervised consumption sites in Vancouver, mainly located within Downtown Eastside and its peripheral areas.

Condition of the surface parking lot at the northeast corner of the intersection of Abbott and West Pender streets before the OPS installation. (Google Maps) 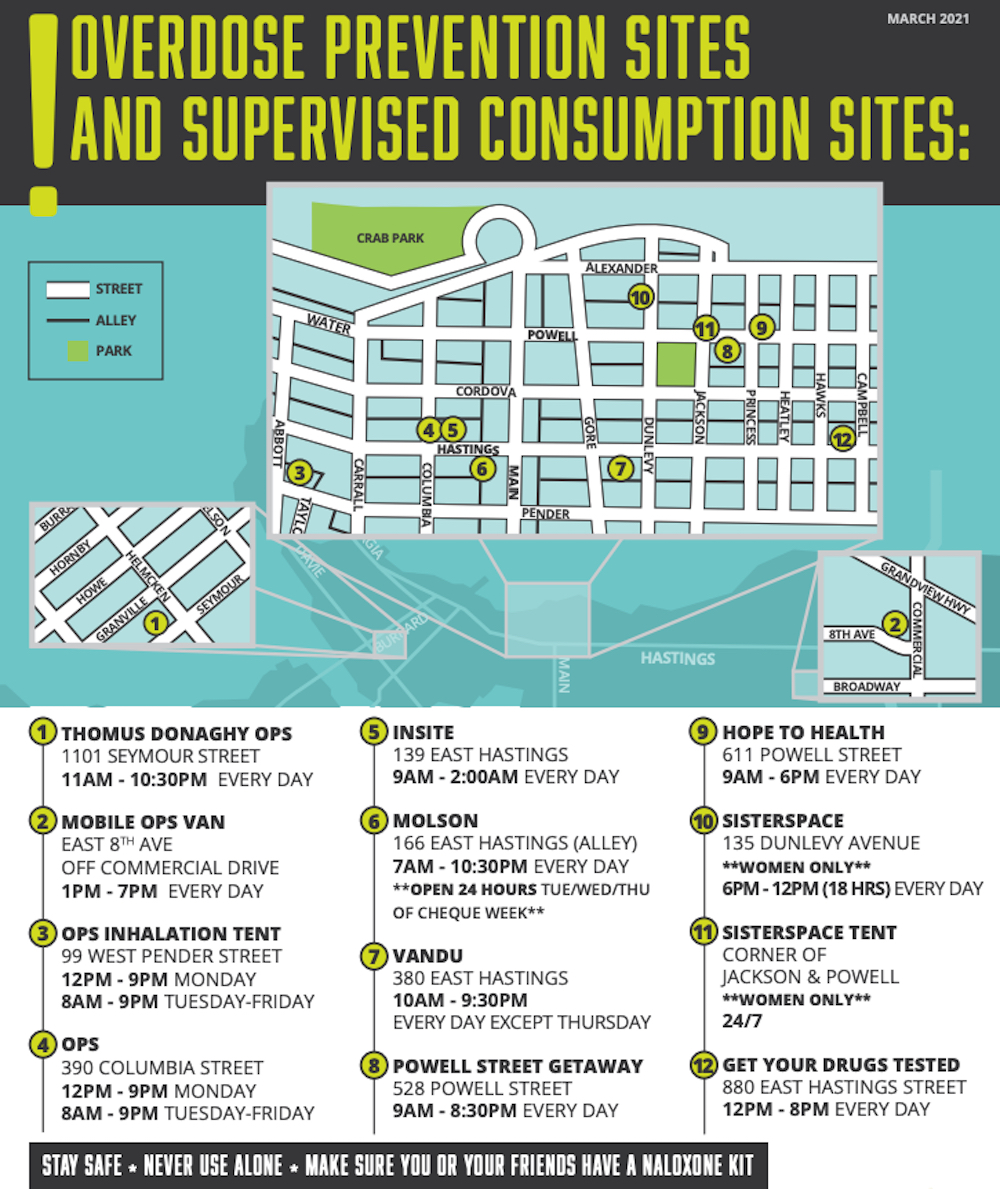 Map of Overdose Prevention Site and Supervised Consumption Site locations in the Downtown Eastside as of March 2021. (Vancouver Coastal Health)