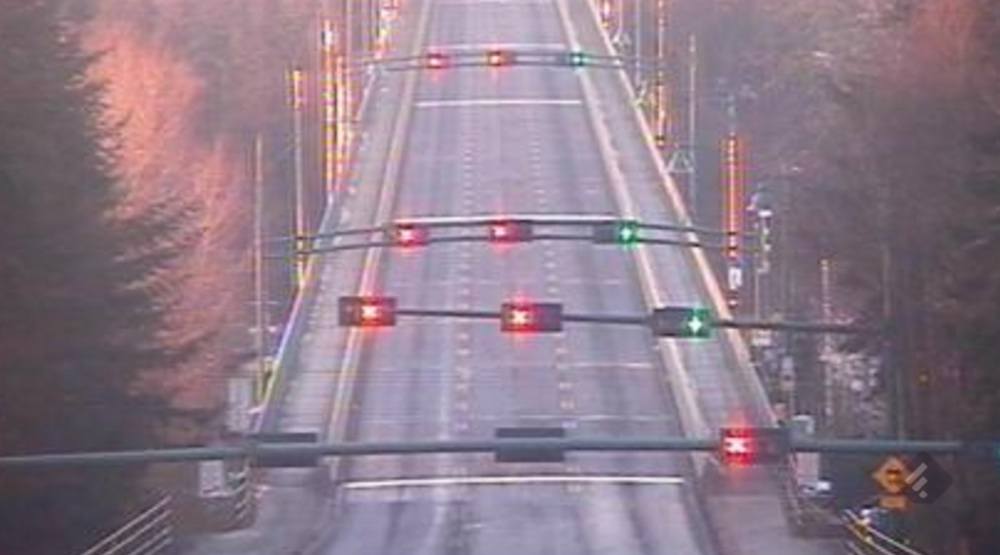 Webcam footage of a complete shutdown of the Lions Gate Bridge due to a collision. (Government of BC)

It should not take hours for police to clear a minor fender bender on the Lions Gate Bridge and Ironworkers Memorial Bridge.

That is the message both the City of North Vancouver and the District of North Vancouver are taking to the upcoming Union of BC Municipalities (UBCM) conference, as the frequency of the accidents on both crossings cause significant delays and economic losses.

Based on ICBC data, there were 1,606 crashes on the Lions Gate Bridge and 972 crashes on the Ironworkers Memorial Bridge between 2011 and 2015. But not all collisions warrant a multi-hour shutdown or severe disruption of a crossing.

Currently, provincial legislation mandates that only police can authorize consent to remove damaged or stalled vehicles blocking a provincial roadway.

Police are also required to respond to an accident that involves damages estimated to be worth over $1,000, and are required by law to conduct a time-consuming MV6020 accident investigation report form on-site.

To help address the issue, both municipalities are requesting the UBCM to call on the provincial government to change the Motor Vehicle Act to allow collisions to be cleared faster.

This includes delegating authority to provincial maintenance contractors to authorize the removal of stalled vehicles or those vehicles involved in minor accidents from blocking a provincial highway.

Additionally, the motion proposes to increase the damage limit to $10,000 to allow police to attend minor accidents without having to complete the MV6020 investigation and facilitate in the timely removal of vehicles with minor damage.

The motion also asks the province to provide local fire departments with the ability to complete a MV6020 investigation for minor incidents on the behalf of police.

The proposed amendments written in a motion submitted by the municipalities to the UBCM would apply to all provincial bridges, tunnels, and highways.

On a daily basis, approximately 70,000 vehicles use the Lions Gate Bridge and 130,000 vehicles cross the Ironworkers Memorial Bridge.