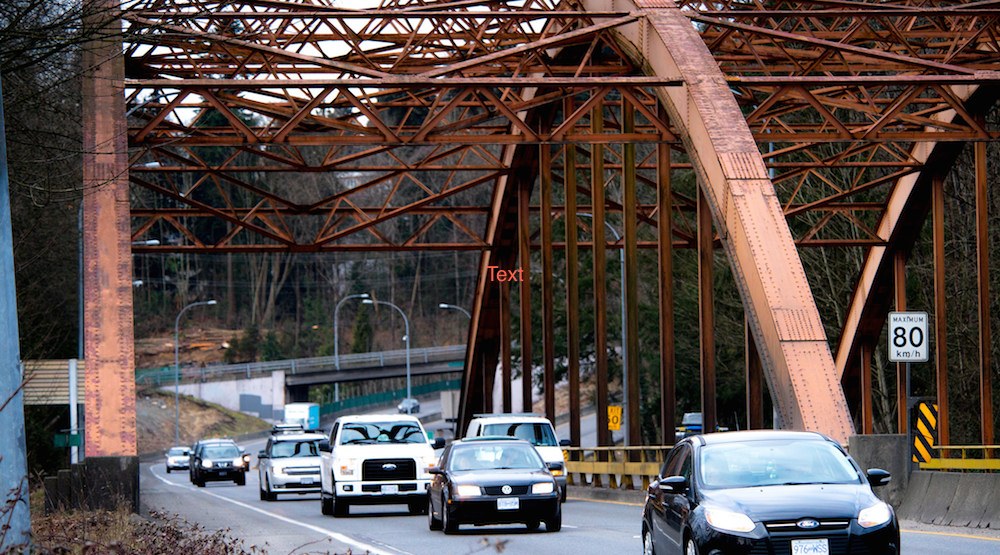 The existing Highway 1 bridge over Lynn Creek in North Vancouver. (Image by: Government of BC)

A major project to improve Highway 1’s capacity and efficiency in the North Shore of Metro Vancouver, specifically near the north end of the Second Narrows Ironworkers Memorial Bridge, is receiving an upgrade of its own.

The North Vancouver Lower Lynn Corridor received a $60 million boost last week to include a fourth phase that consists of new westbound lane connecting Mountain Highway with Mount Seymour Parkway, an eastbound on-ramp from Mountain Highway onto Highway 1, and new two-lane bridges on each side of the existing bridge across Lynn Creek. Highway 1’s existing Lynn Creek bridge will remain.

While the new additional phase will cost $60 million, it will also result in cost savings of $12 million, which gives the overall Lower Lynn Corridor project a new total cost of $198 million. 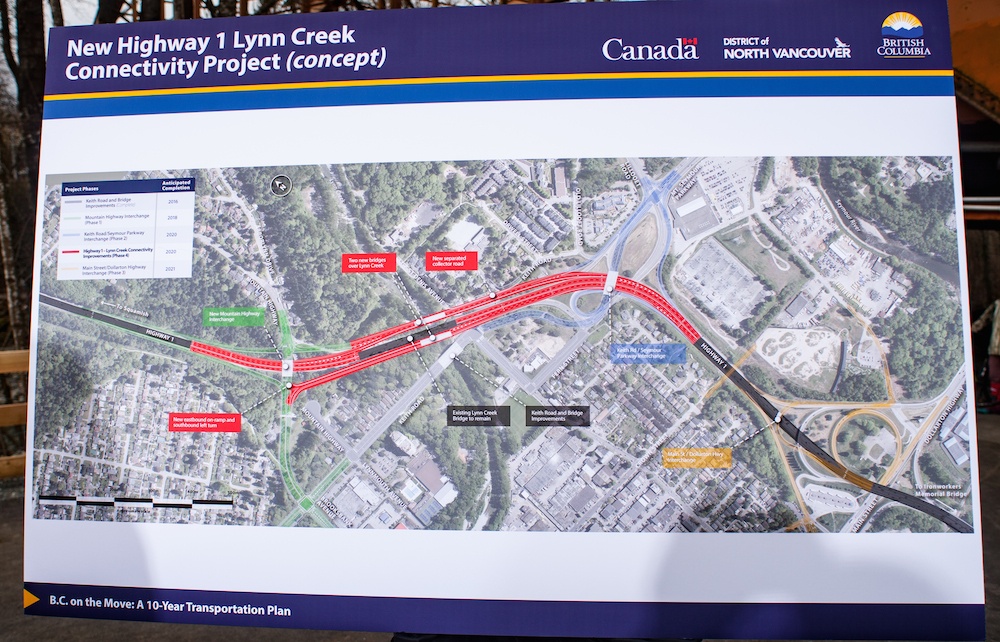 Proposed changes and additions to the Lynn Creek Corridor project. (Image by: Government of BC)

The changes in the project were developed following a public consultation phase early last year and will provide more capacity for the route to reduce any backups near the Second Narrows Ironworkers Memorial Bridge.

“The ministry listened to constructive public feedback on this project and collaborated with the District of North Vancouver and the federal government on a plan to further improve safety and connectivity in this area, resulting in the addition of Phase 4 to the existing project,” said Todd Stone, BC Minister of Transportation and Infrastructure, in a statement.

Funding for the new additional phase is split three ways, with the federal government, provincial government, and District of North Vancouver each committing approximately $20 million.

“This vital highway improvement project will improve traffic through the community and on Highway 1 to access BC Ferries and the Sea-to-Sky Highway to Squamish and Whistler,” added Stone.

The initial plan for the project, originally pegged at $150 million, covered three phases – one phase for each upgrade for three Highway 1 interchanges, which were built over 50 years ago, plus a new connector between Mountain Highway and Lillooet Road and a new Keith Road bridge.

The new four-lane Keith Road Bridge to replace the 70-year-old two-lane crossing over Lynn Creek was completed in December 2016. Design work is in progress for the upgrades to the three interchanges, with planning for Mountain Highway interchange reaching an advanced stage. 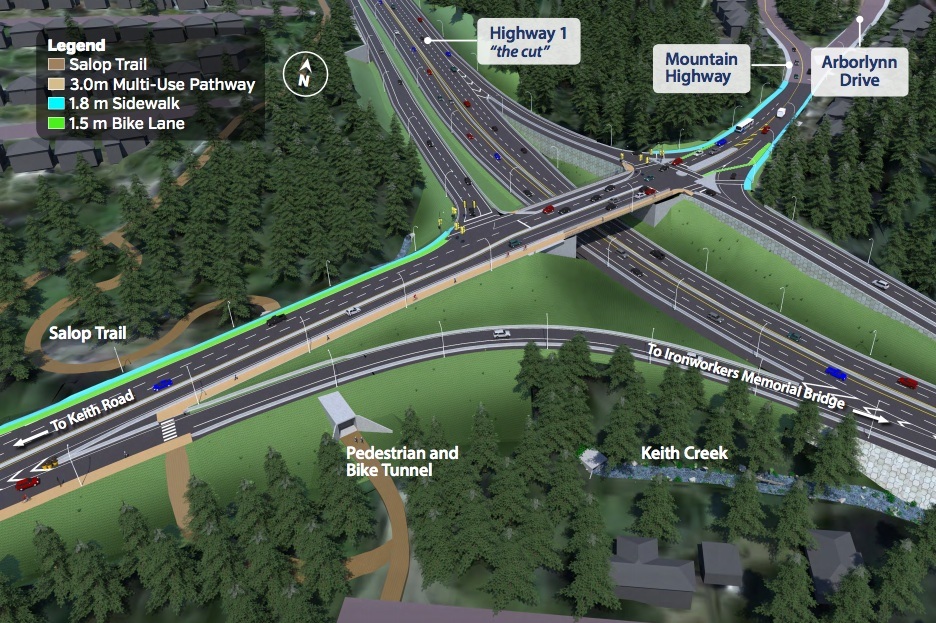 The original 2016 proposal for the new Mountain Highway interchange. (Image by: Government of BC)

Mountain Highway currently only consists of a one exit ramp from the westbound direction of Highway 1. The redesign for this interchange will replace the existing two-lane overpass with a four-lane overpass and add new on-ramps and off-ramps to each direction.

It is anticipated that all phases of the project will be complete by 2021. Approximately 130,000 vehicles cross the six-lane Second Narrows Ironworkers Memorial Bridge on a daily basis at last count in 2011, but this has likely increased since the expansion of Highway 1 from Vancouver to Surrey, including the opening of the new Port Mann Bridge. 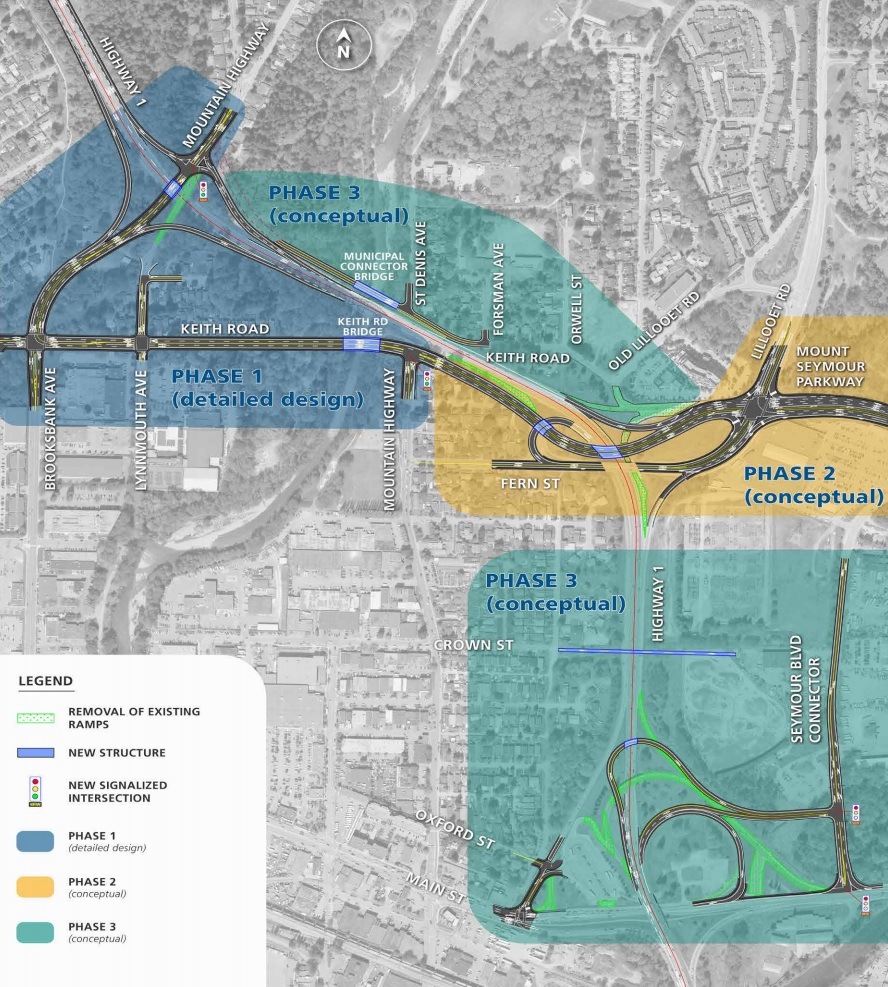 Original plans for the Lynn Creek Corridor improvement project called for three phases. A fourth phase has since been added. (Image by: Government of BC)