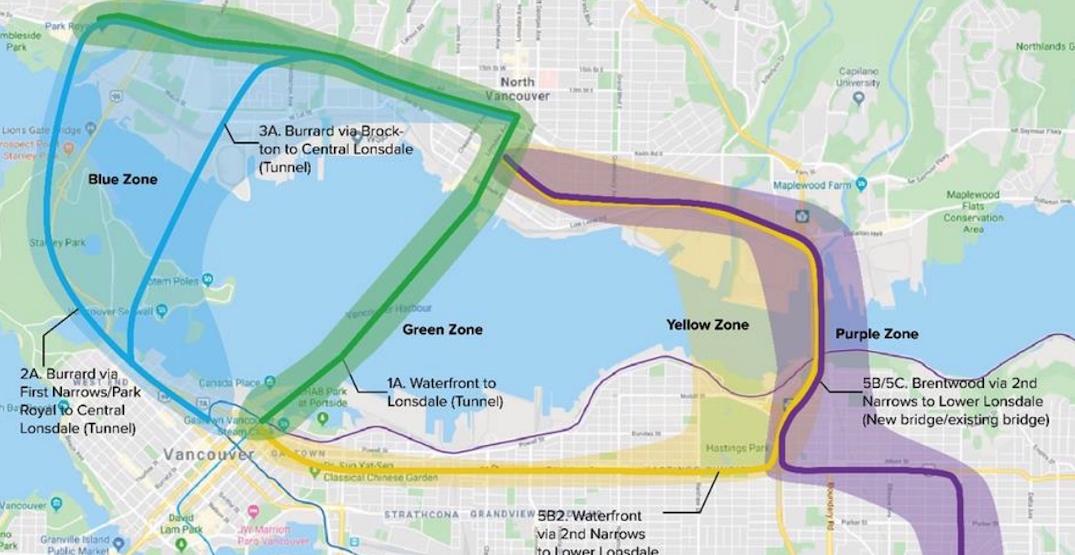 The provincial government has released its full high-level technical feasibility study of extending the region’s SkyTrain network between Vancouver and the North Shore.

Further analysis has been conducted on the six route options shortlisted in March, with the options examining the tradeoffs of possible routings, and how integration with the regional transportation system can be achieved.

The options explore using the First Narrows and Second Narrows, which are the narrowest and shallowest points of the Vancouver harbour segment of Burrard Inlet, as well as a direct, straight route from Waterfront Station to Lonsdale.

“Our government is committed to creating greener and more liveable cities and boosting access to transit as much as possible,” said Claire Trevena, BC Minister of Transportation and Infrastructure, in a statement.

“This study shows possibilities that can be considered in future planning. It’s exciting to look towards a future high-speed connection that will make moving around on the North Shore and Greater Vancouver easier and greener.”

The next steps after this study are to conduct significant engineering work, given the challenging glacial geology, as well as preliminary construction cost estimates, transportation modelling, and how such a new transportation link could achieve housing and development objectives. No additional funding has been allocated at this time for the further study required. 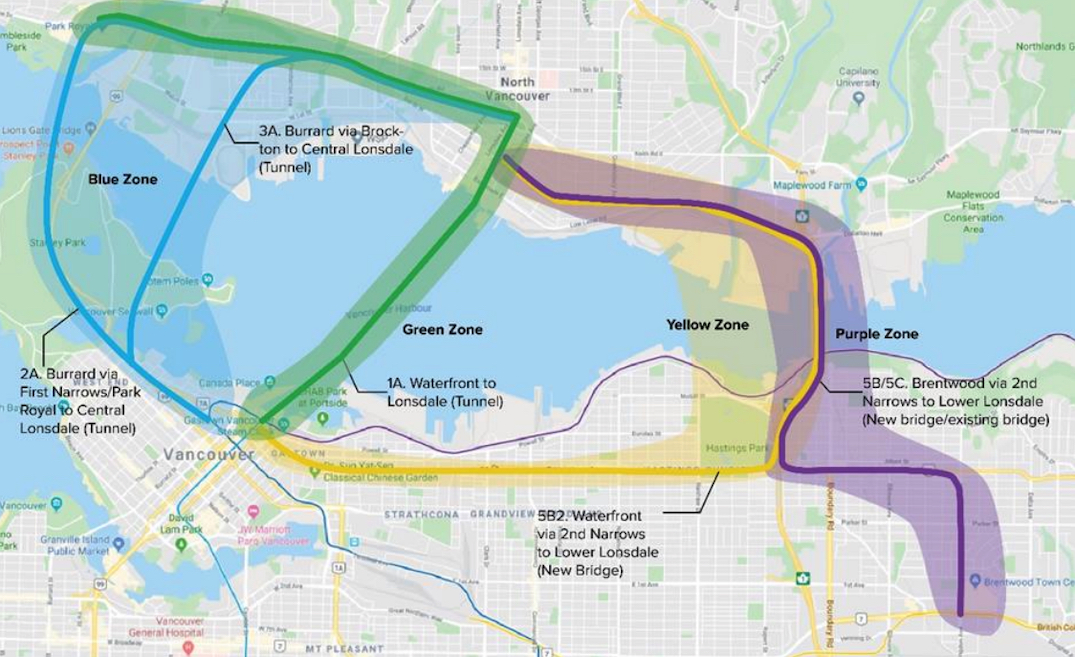 “A future rapid transit connection across the Burrard Inlet will provide better connections for Vancouver, North Shore and other Metro Vancouver residents to access the housing, employment and recreation opportunities on both sides of the inlet,” said Vancouver Mayor Kennedy Stewart.

“The rapid transit options identified through this study will prepare us for future discussions on how our region can provide more low-carbon, affordable and equitable transportation options. We look forward to participating in the next stage of this work and will continue to consider a Burrard Inlet rapid transit connection through our own policy and planning initiatives.”

All options through the First Narrow — tunnelling under downtown Vancouver and Stanley Park — have a starting point from the Expo Line’s Burrard Station. It will be a spur line of the Expo Line, effectively turning Burrard Station into a major interchange hub.

The tunnel for Option 2A takes a longer route, travelling further west into Stanley Park and west of the Lions Gate Bridge to reach Park Royal in West Vancouver. The tunnel transitions to an elevated guideway near Ambleside Park just west of Park Royal, and the SkyTrain route continues eastward along Marine Drive to reach Lions Gate Village, Capilano Mall, and Central Lonsdale. The total route length of Option 2A is 5.9 kms. 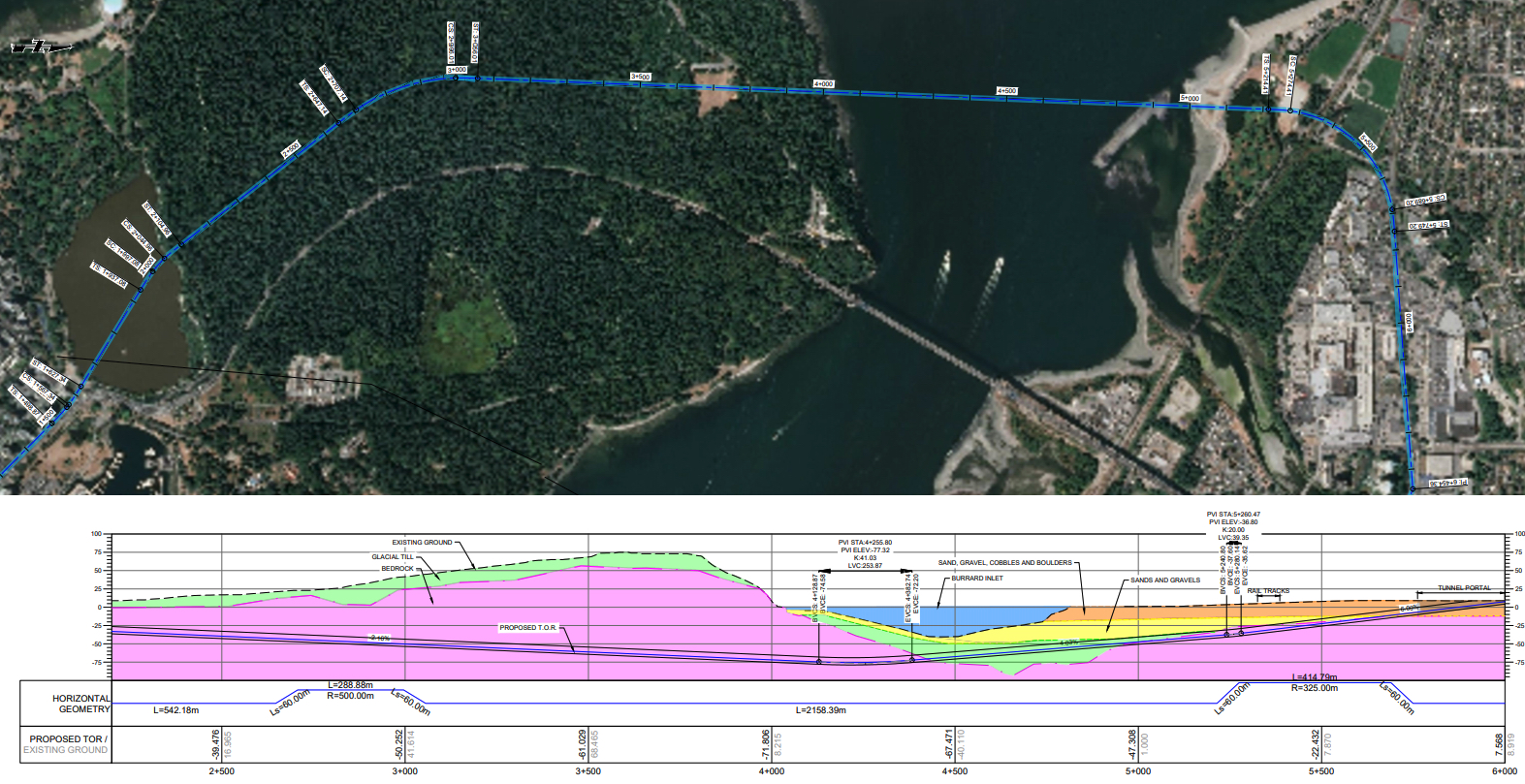 Option 2A route for North Shore SkyTrain from downtown Vancouver via Stanley Park and the First Narrows to Park Royal. Click on the image for an enlarged version. (Government of BC)

An alternate 4.6-km-long route in the vicinity of First Narrows has a shorter tunnel span under Burrard Inlet by bringing the tunnel under Coal Harbour and near Stanley Park’s Brockton Point. This shorter Option 3A route east of the bridge skips West Vancouver entirely, but it provides a faster journey time to Capilano Mall and Central Lonsdale. It will transition from tunnel to elevated guideway along 1st Street after a 900-metre-long crossing under Burrard Inlet.

Both options will provide downtown’s West End, one of the most densely populated areas of the region, with a SkyTrain station. The SeaBus will be retained, and the Expo Line will operate with alternating final destinations, with one in three trains continuing to the North Shore and the other two trains ending at Waterfront Station. 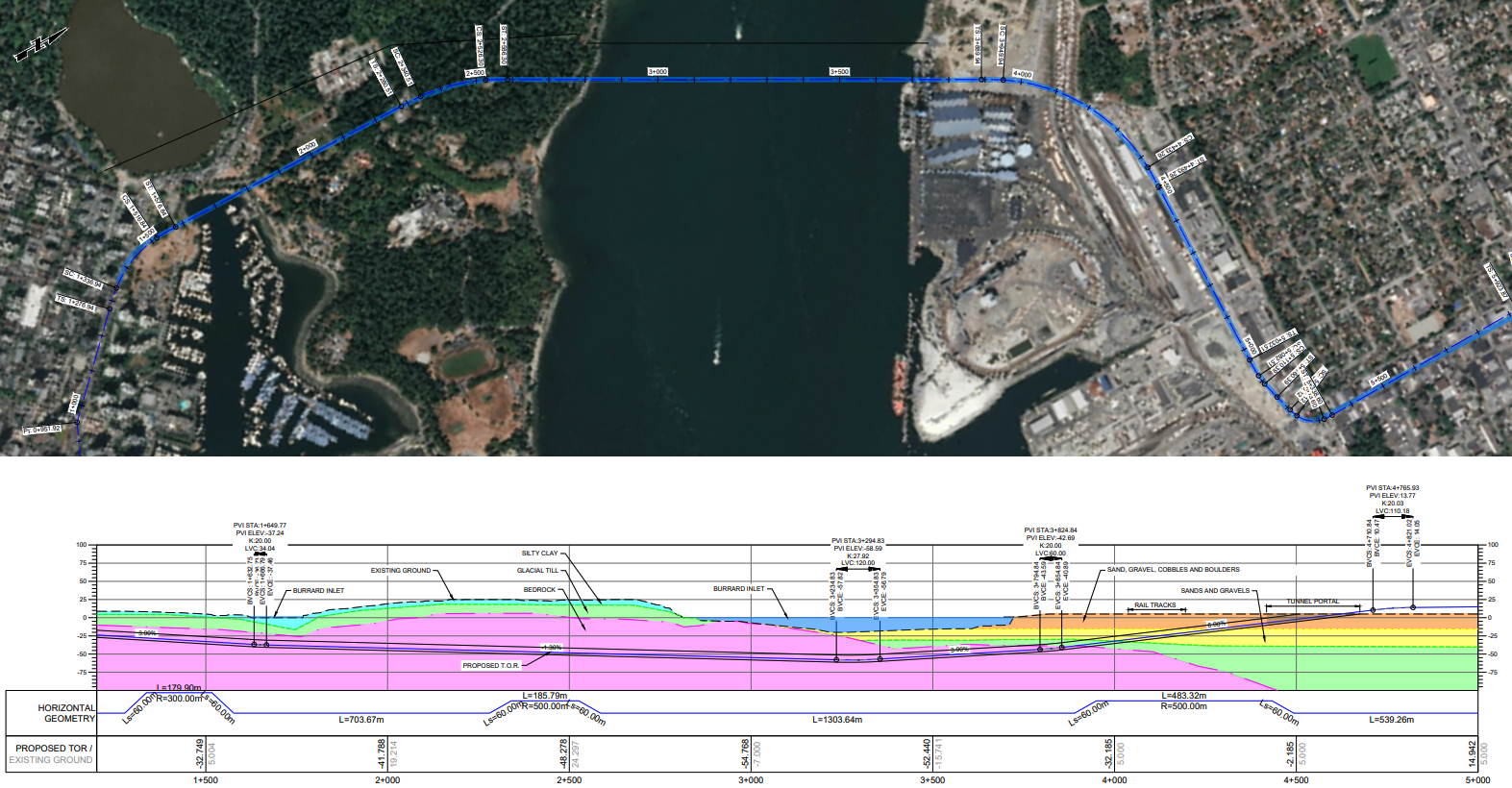 Option 3A route for North Shore SkyTrain from downtown Vancouver via Stanley Park’s Brockton Point to Central Lonsdale. Click on the image for an enlarged version. (Government of BC)

A SkyTrain link that generally follows the existing routing of SeaBus from Waterfront Station to Lonsdale would have to contend a deep portion of Burrard Inlet, where water depths are over 50 metres. The tunnel alignment would be 3.4 km long — nearly four times longer than the other two Burrard Inlet tunnel crossings through Stanley Park. But it has the shortest travel time across the waterway.

If this Option 1A route were a new separate SkyTrain line, it would require the construction of transfer platforms at Waterfront Station at a depth of about 60 metres (200 storeys). Comparatively, the Canada Line’s Waterfront Station platforms are 12.5 metres below the surface. There would be major transfer penalties to ridership between the new North Shore Line, Expo Line, and Canada Line.

More importantly, the steep topography a straight line route would have to achieve under Burrard Inlet and the North Shore is challenging for the slope limitations of the rail infrastructure used. 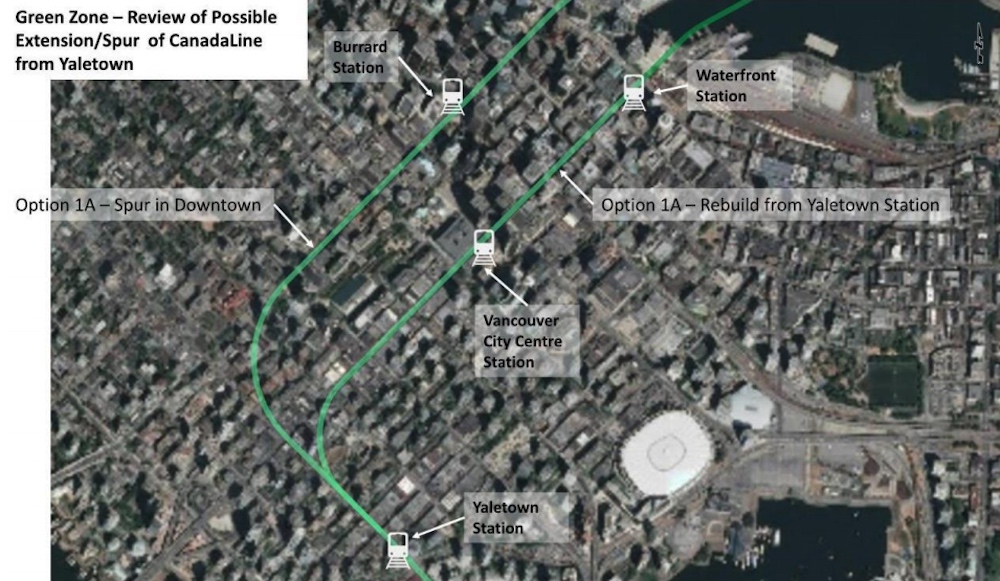 Option 1A North Shore extension options for the Canada Line in downtown Vancouver. (Government of BC)

Alternatively, to achieve this route option, the study contemplates a northward extension of the Canada Line. But it would necessitate a 1.1-km-long rebuild of the Canada Line’s tunnel between Waterfront Station and north of Yaletown-Roundhouse Station (the tunnel north of Nelson Street) to lower the tunnel and the two major stations by about 20 metres to 35 metres compared to the current track elevation. The study acknowledges that there are significant challenges, passenger impacts, and construction costs with this option. An analysis on how it will change Canada Line ridership has not been performed, but it is well known that this existing north-south SkyTrain system’s capacity is underbuilt due to its short platforms.

This route option will replace the SeaBus. On the North Shore, there will be stations at Lonsdale Quay and Central Lonsdale, and then along Marine Drive at Capilano Mall, Lions Gate Village, and Park Royal. 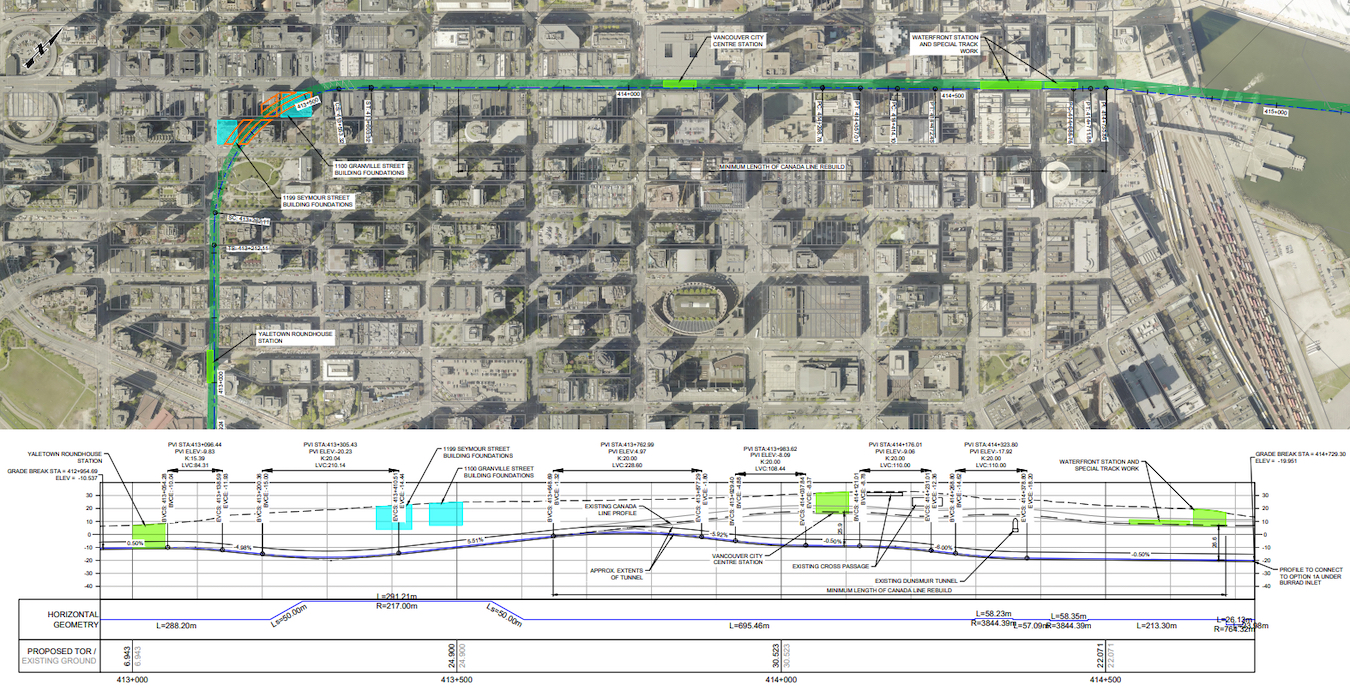 Option 1A: North Shore extension option by rebuilding the Canada Line in downtown Vancouver to a deeper tunnel. Click on the image for an enlarged version. (Government of BC)

Option 5B2 is a seamless eastward extension of the existing Expo Line from Waterfront Station that travels under Hastings Street, and reaches the North Shore with a new bridge across the Second Narrows. Other stations will be located along Hastings Street at Main Street, Commercial Drive, Nanaimo Street, and Renfrew Street (PNE/Hastings Park), as well as Phibbs Exchange, Moodyville, and Lonsdale on the North Shore.

As the circuitous route does not provide a fast link to the North Shore from downtown, the SeaBus will be retained. But the routing will create new development opportunities along Vancouver’s Hastings Street corridor, and provide a secondary east-west relief line into downtown, which will help address the forthcoming capacity limitations of the Expo Line. This route also has opportunities for a spur line to reach Brentwood Town Centre and Metrotown.

The other two options — 5B and 5C — through the Second Narrows connect Burnaby to the North Shore, specifically from Brentwood Town Centre Station to Lower Lonsdale. The key difference is one option will consist of a new SkyTrain bridge (with a pedestrian and cycling walkway across the Second Narrows), while the other option retrofits the existing 1957-built Ironworkers Memorial Bridge to allow for a guideway in a new truss underneath the roadway deck of the bridge. There are challenges with the latter option of using the existing bridge, including seismic resilience, ship collision, and wind and fatigue.

Options 5B and 5C are both separate SkyTrain lines with a new transfer station at Brentwood Town Centre to connect to the Millennium Line. Other stations will include Boundary Road, Phibbs Exchange, Moodyville, and Lonsdale, and there is also the possibility for a southward extension to connect with Metrotown Station on the Expo Line. 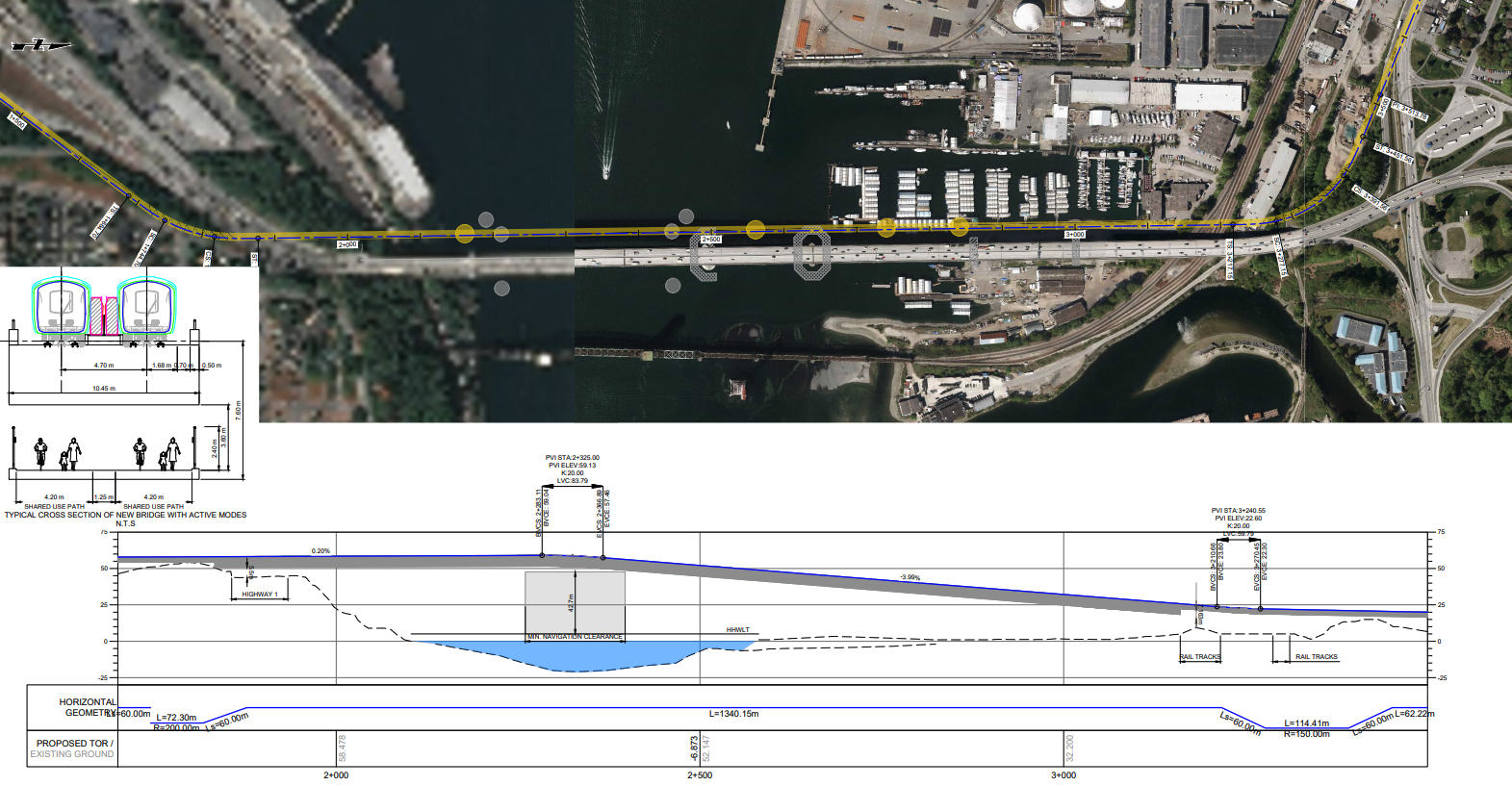 New SkyTrain bridge across the Second Narrows immediately west of the existing Ironworkers Memorial Bridge. Click on the image for an enlarged version. (Government of BC)

The Vancouver office of Mott Macdonald Ltd., a UK-based engineering and development consultancy company, was contracted to conduct the study, which was first announced in May 2019. The firm is a part of the Acciona Infrastructure and Ghella Canada-led consortium that will build the Millennium Line Broadway Extension to Arbutus, and it was also behind a recent preliminary study commissioned by TransLink on extending SkyTrain from Arbutus to UBC.