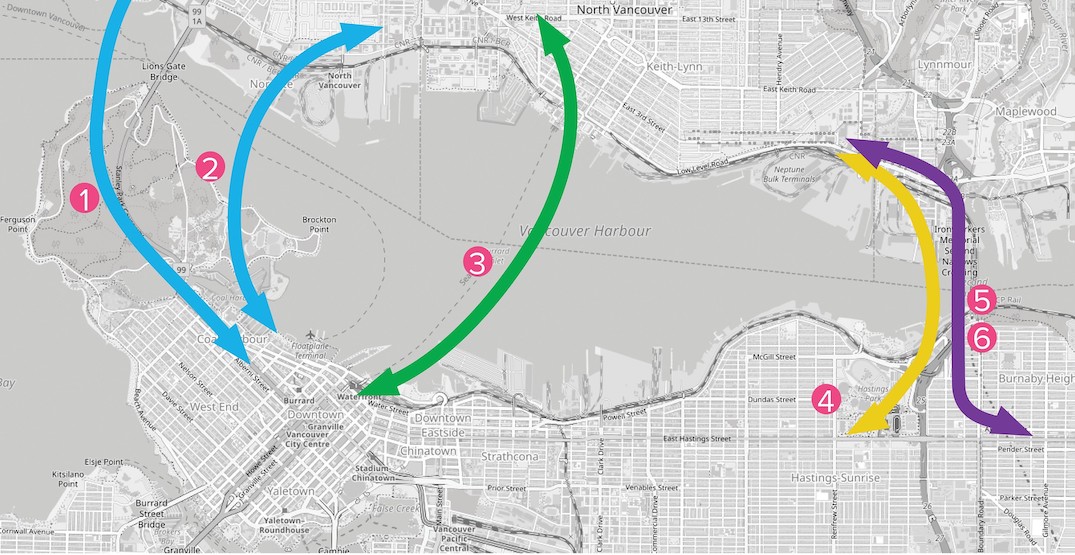 After approximately five months of study, the provincial government has identified six possible route options for a high-capacity, fixed-link, rapid transit crossing across Burrard Inlet between Vancouver and the North Shore.

BC Ministry of Transportation and Infrastructure announced its plans to conduct a North Shore rapid transit crossing study in May 2019, and the Vancouver office of Mott Macdonald Ltd., a UK-based engineering and development consultancy firm, was selected in October 2019 to lead the analysis on technical feasibility.

The results of the first phase of the study, released today, identify preliminary possible crossing points for rapid transit connections to the North Shore from Vancouver and the rest of the region.

The considered options include routes that travel directly between downtown Vancouver and Lonsdale City Centre or through Stanley Park, whether it be through Brockton Point or the First Narrows, near the Lions Gate Bridge — where the Burrard Inlet channel is narrower and shallower. The regional district’s trunk water connections from the North Shore reservoirs are also located in the general area of the First Narrows.

Other options include routes that begin in Burnaby that utilize the Second Narrows — either a new bridge crossing or utilizing an existing bridge.

Here is the full shortlist of the six possible options: 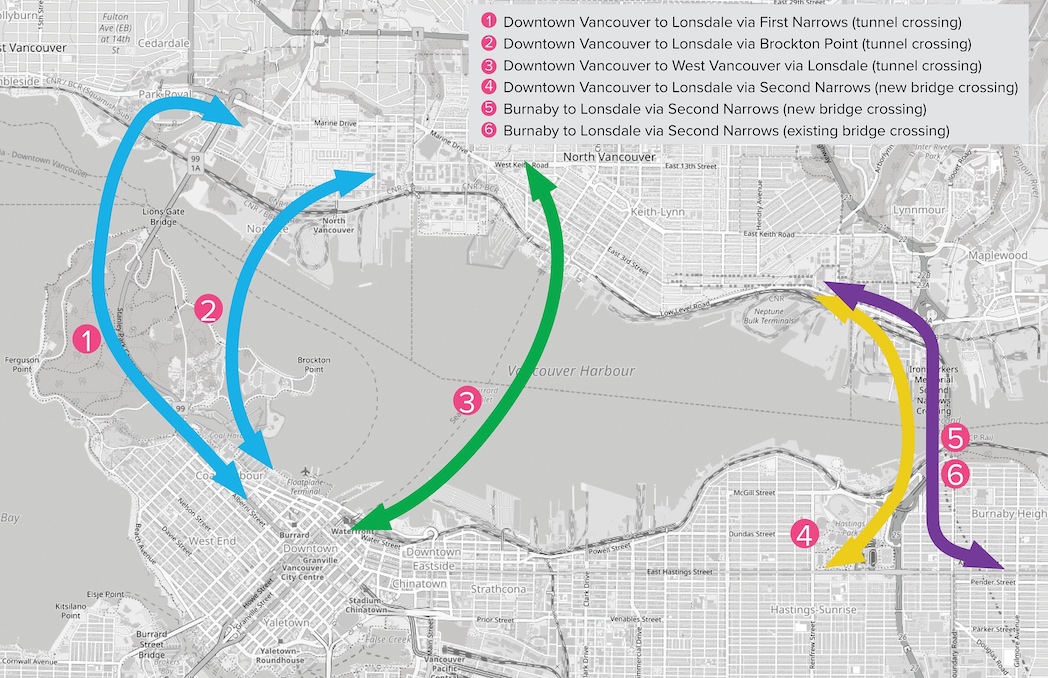 The potential route options and the noted crossing type will be further explored in the second phase of the study. An extension of the region’s SkyTrain network is expected to be a consideration.

“We know that people living and working on the North Shore are frustrated with traffic congestion that has been increasing for years,” said Claire Trevena, BC Minister of Transportation and Infrastructure, in a statement.

“By investing in this study, our government is helping to take a serious look at solutions that expand our public transportation network to better connect communities and to help people move around freely. The results from this study will support the North Shore and surrounding communities with their long-term transportation planning.”

There is specific interest with connecting North Vancouver’s Lonsdale city centre with downtown Vancouver and rail rapid transit, which was one of the recommendations of the Integrated North Shore Transportation Planning Project (INSTPP) in 2018.

Early findings by the INSTPP panel — represented by provincial, regional, and municipal planners and officials — found that a rail rapid transit line connecting to the area south and east of the Second Narrows Bridge would result in low ridership because of the dispersed development it would serve.

A route that establishes a direct connection with Lonsdale City Centre in North Vancouver and Waterfront Station in downtown Vancouver is an early favourite based on the ridership potential. The INSTPP report at the time stated that some of the new transit ridership from this option would come from a shift in automobile use, but most of the increase would be from new travel patterns.

“Transportation is the top challenge facing our community right now. Identifying new rapid transit options is a crucial step in the right direction to connect our communities and begin addressing the traffic congestion issues that impact our residents,” said Mike Little, Mayor of the District of North Vancouver.

“We anticipate the results of this study will identify feasible options that support our long-term transportation planning goals.”

The full results of the study, performed in the second phase of work, will be used by TransLink to inform its Transport 2050 process of creating a new 30-year regional transportation strategy. The rapid transit study will be completed well in advance of Transport 2050’s conclusion by the end of this year.

“This study will complement Transport 2050, Metro Vancouver’s blueprint for the next 30 years of transportation,” said TransLink CEO Kevin Desmond.

“In the coming phase of public engagement for Transport 2050, we will ask residents and stakeholder groups to think critically about which transportation initiatives are the most important to the long-term liveability of our region. As the population of Metro Vancouver rapidly grows, it’s essential that the transit network also grows and expands to the places that need it most.”

The last time the North Shore saw an added fixed-link crossing was in 1960 with the construction of the six-lane Ironworkers Memorial Bridge.

Over the span of these decades, two SkyTrain extensions and numerous road bridges have been built to cross the Fraser River in the region’s southern areas, but there has been no new link to the North Shore other than the launch of SeaBus in 1977.

Some major improvements have been made to SeaBus in recent years, including the renovation of the terminals, the acquisition of new additional vessels, and the introduction of 10-minute peak frequencies.

Needless to say, the Lions Gate Bridge and Ironworkers Memorial Bridge are severely strained, and these crossings are generally highly unreliable, with traffic-stopping accidents a frequent occurrence. Moreover, increased traffic to Squamish and Whistler from the Sea to Sky Highway upgrades a decade earlier has placed an even greater strain on the crossings in recent years.

The limits of both bridges and SeaBus have highly constrained housing, employment, and economic opportunities in the North Shore.