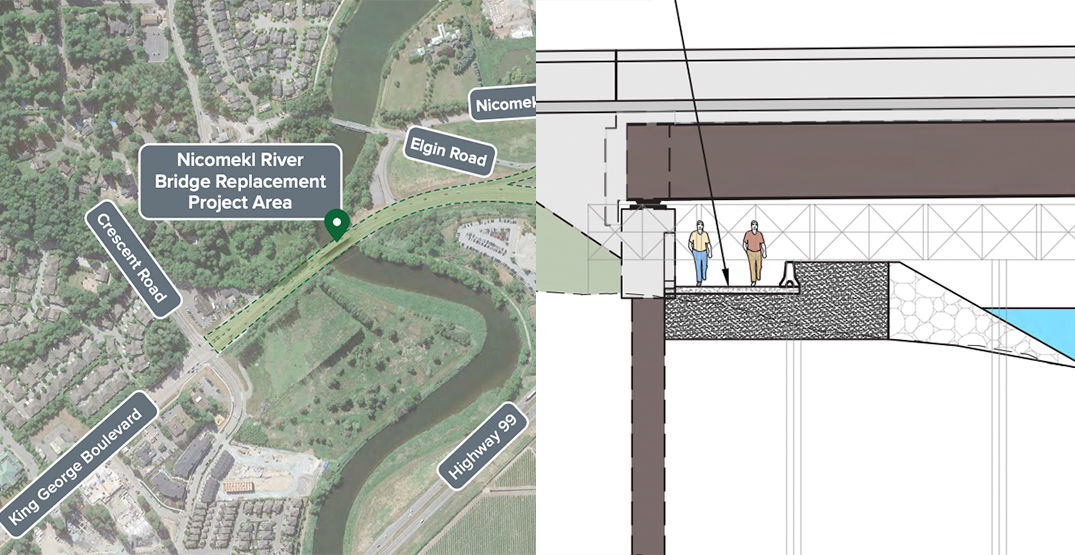 Construction will begin soon, sometime this winter, on a new replacement bridge crossing for King George Boulevard over the Nicomekl River in South Surrey.

The City of Surrey confirmed today the project for the new Nicomekl River Bridge is now proceeding, which would replace the existing single-lane Bailey Bridge for King George Boulevard’s northbound direction, and the parallel two-lane timber trestle bridge for the southbound direction.

The replacement crossing will be a four-lane bridge, providing two traffic lanes for each direction. This is one more lane than the three-lane configuration of the existing bridges.

Of course, this announcement on pushing forward with the new bridge comes just a week after BC saw a substantial rainfall event that led to rivers overflowing their banks, causing extensive flooding in the Fraser Valley and parts of Metro Vancouver.

Location of the new bridge project for King George Boulevard across the Nicomekl River. (City of Surrey)

View of the existing King George Boulevard bridges across the Nicomekl River in Surrey. (Google Maps)

Currently, the bridges along the King George Boulevard arterial corridor see an average of 26,000 vehicles per day, including trucks for goods movement.

The new King George Boulevard bridge would not only have more capacity than the existing crossings to improve traffic flow and emergency response times, but it would be designed to be more resilient to earthquakes and flooding for increased public safety.

King George Boulevard on both ends of the bridge would also be rebuilt at a raised level to make it more resilient to flooding, and dike tie-ins would be provided. 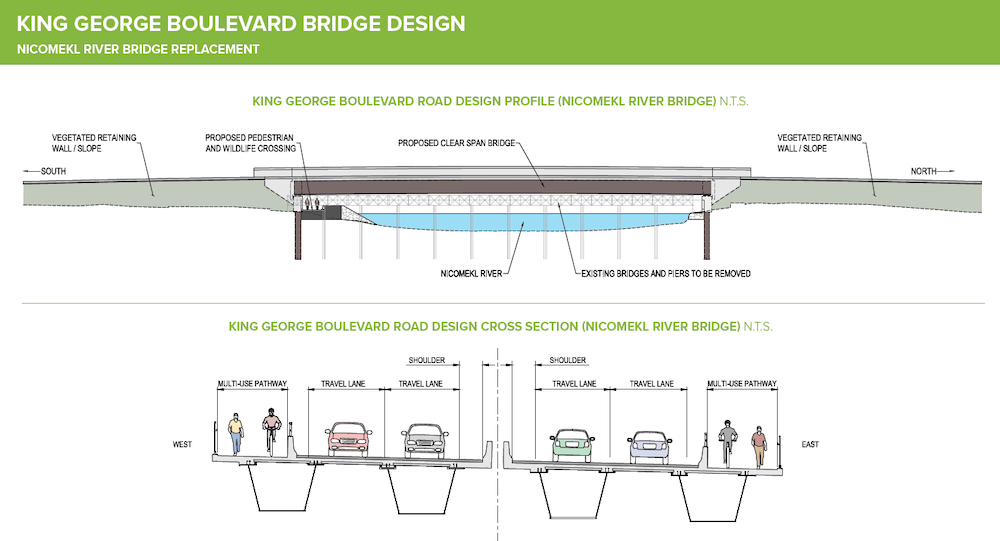 Design of the new Nicomekl River Bridge. (City of Surrey)

There would also be new walking and cycling pathways on the new bridge and along the King George Boulevard road connections, and walking trail connections to riverfront green space and TransLink’s South Surrey bus exchange and park-and-ride facility on the north end of the bridge.

Construction is expected to reach completion by late 2022 or early 2023. The existing Bailey Bridge has already been decommissioned, and the work on its removal will begin before the end of 2021. During construction, drivers are urged to consider alternate routes due to the anticipated traffic delays.

“The new Nicomekl River Bridge will build a stronger transportation network for Surrey residents to connect more efficiently to each other, and to the region as a whole,” said Surrey Mayor Doug McCallum in a statement.

“The new crossing benefits everyone, and I would like to thank the Province for their collaboration in making this long overdue project happen.”

Rob Fleming, BC Minister of Transportation and Infrastructure, added: “A new Nicomekl River crossing will support better community connections in Surrey. This wider crossing, built to modern standards, will be safer for pedestrians and cyclists, and alleviate the traffic bottleneck at the present three-lane crossing.”

Just to the west of the existing bridge crossing is the Nicomekl River Sea Dam, which prevents sea water from flowing into farmland on the lowland floodplain area of the river. It also doubles as a single-lane local traffic bridge for Elgin Road.

Sea dams on both the Nickmekl and Serpentine rivers open when tides are low to allow fresh water to flow west into Mud Bay. But when the tides are high, the gates prevent salt water from moving east, up the river into farmland, preventing the areas close to sea level from reverting into an intertidal zone.

The first sea dams on both rivers were built a century ago. There are plans to replace both dams with modernized structures.

Additionally, the municipal government is planning to create an 80-acre nature park along the banks of the Nickmekl River from the bridge to 40 Avenue, spanning a distance of about three km. 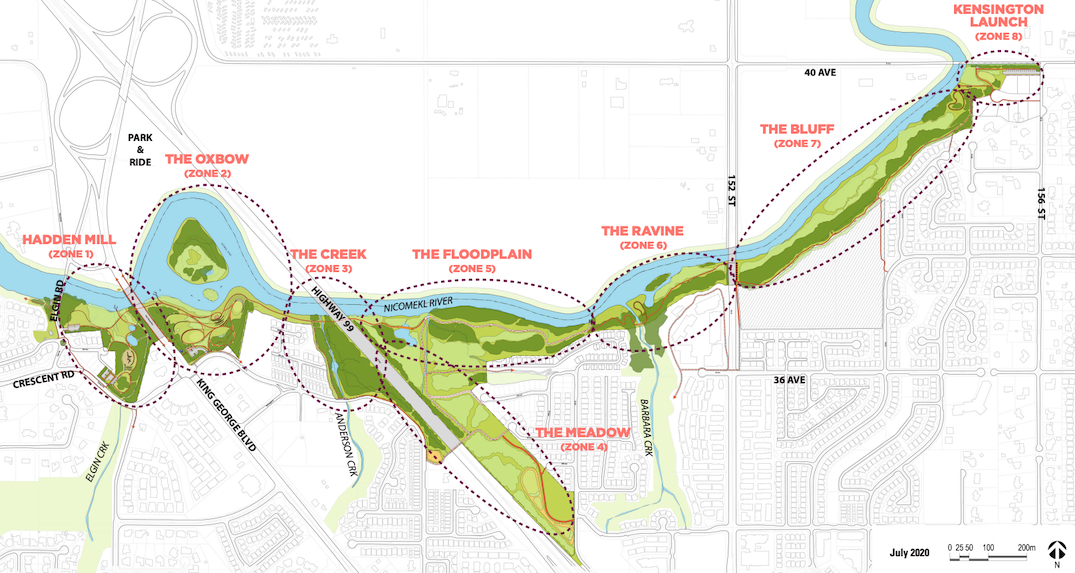 The sprawling park will provide new recreational opportunities such as 3.5 km of trail extensions and kayak and canoe launch areas, but it will also have major flood mitigation measures.

About 50 acres will be floodable area to reduce the risk of flooding in farmland and urban areas, and overall there will be 76 acres of protected riparian area to slow down the movement of water and assist with absorption. Four acres of protected habitat islands are also planned.

The Nicomekl Riverfront Park is one of 13 projects by the City of Surrey that are partially funded by the federal government’s Disaster Mitigation and Adaptation Fund, which is dedicated towards assisting communities with building infrastructure to better withstand natural hazards. The municipal government secured $76.6 million in federal funding in 2019 for these projects, with $4 million set aside for this specific park project.

The park project is still in the planning stages, but construction is expected to begin in 2023 for completion in 2025.