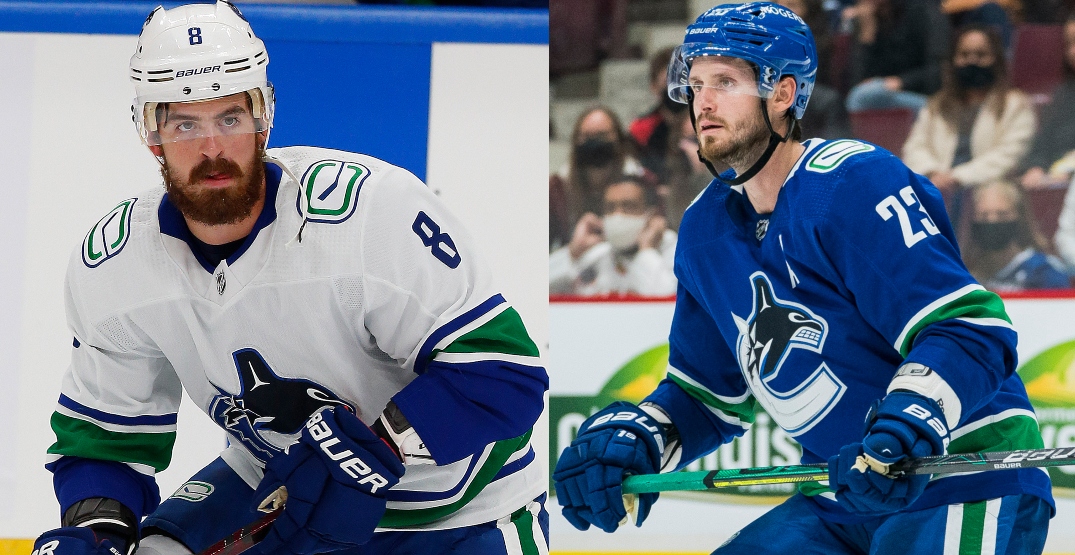 The Vancouver Canucks might not be an expansion team, but the amount of new faces on this team might make you believe otherwise.

An unfathomable amount of roster turnover has taken place in Vancouver since the end of last season. The newcomers on this team now outnumber the incumbents.

The Canucks have 10 returning players on the opening night roster. Two of them, Matthew Highmore and Jack Rathbone, only joined the team at the tail end of last season.

You’re about to see a lot of new jersey numbers when the Canucks hit the ice. To help you keep track of everyone, here’s a quick glance at the 13 new players who have made the Canucks to start the season.

Five-foot-eight winger Conor Garland has emerged as a bonafide top-six scoring threat during his first three NHL seasons. Since he entered the NHL in 2018-19, Garland has scored 1.04 goals-per-60 at even-strength. That’s one of the league’s best rates during that time.

The Canucks desperately needed a defensive-minded third-line centre, and they seem to have found their answer in Jason Dickinson.

This isn’t a player who’s likely to score a ton. However, if he can take away some of the tough matchups from Bo Horvat while excelling in a top penalty-killing role, he’ll be an asset to this team.

Another year means another rookie debut for the Canucks.

There’s probably too much hype surrounding Vasily Podkolzin after what the likes of Brock Boeser, Elias Pettersson, Quinn Hughes, and Nils Hoglander have done in recent years. However, some of that hype may have cooled after a quiet preseason from the 20-year-old.

Many believe that Podkolzin, the first Canuck to ever wear #92, has advanced defensive acumen for his age. It may take him a while to get used to playing in the NHL, so the team and fans need to be patient with his development.

The newest addition to the list, the Canucks announced on the eve of the season that they had signed Alex Chiasson to a one-year contract worth $750,000.

It was clear during the preseason that head coach Travis Green wanted the veteran winger on the team. Chiasson practiced in the top-six alongside J.T. Miller and Pettersson while receiving ample time with the top power play unit.

Nic Petan was one of the surprise additions to the Canucks roster. The Delta, BC native has always possessed dazzling puck skills, but he’s never shown enough to stick around in the NHL permanently.

He’ll get a chance now with his hometown team after scoring a couple of goals while looking solid, albeit unspectacular, during the preseason.

Justin Dowling’s chances of making this team skyrocketed after the absences to Brandon Sutter and Tyler Motte.

The 31-year-old veteran has stuck around as a fourth-line utility player for the Dallas Stars during the last two seasons. He’s not flashy, but Dowling is easy to cheer for after a long and unorthodox journey to the NHL.

The second newest addition to the Canucks following Chiasson, Juho Lammikko was part of the return in the deal for defenceman Olli Juolevi.

The Finnish forward returned to the NHL in 2020-21 after a one-year absence, and now he will provide depth at centre and penalty-killing prowess for the Canucks.

Not to be confused with the departed Alex Edler, the new #23 for the Canucks will be one of the key players for the club this season.

The Canucks are banking on a return to Norris form for Oliver Ekman-Larsson. If he continues to regress as he has in recent seasons, this team is in trouble.

Congratulations to Tucker Poolman, who “won” the gig to play alongside Hughes.

Travis Hamonic’s absence pushed the 28-year-old up the depth chart, and the Canucks are counting on Poolman to be Tanev 2.0.

Luke Schenn returns to the Canucks after a short stint here in 2018-19. The 31-year-old spent the last two seasons as a depth defenceman in Tampa Bay, where he collected two Stanley Cup rings.

Brad Hunt might be a depth defenceman, but the Maple Ridge native is someone with good mobility and offensive instincts. His versatility, having experience playing the right side, will be a plus too.

Originally drafted by the New York Islanders back in 2013, Kyle Burroughs played the first NHL games of his career last season with the Colorado Avalanche.

He’s probably the biggest surprise player to make the team out of camp, but Burroughs looked assertive and physical throughout preseason action.

Jaroslav Halak is the oldest player on the Canucks roster this season. Despite a bit of a down season with the Bruins in 2020-21, the 36-year-old Slovakian netminder has a history of pushing starting goaltenders for playing time.

Halak will have to get used to a different defensive atmosphere in Vancouver compared to Boston. The Bruins allowed the second-fewest shot attempts at even-strength last season, while the Canucks were the NHL’s most permissive team in that department.