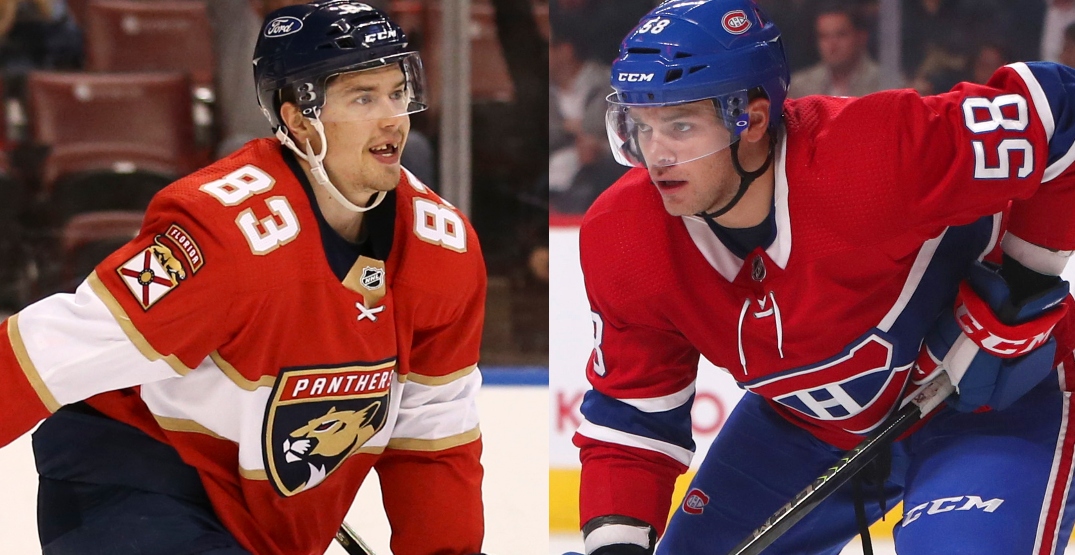 Olli Juolevi may become an NHL regular one day, but that won’t happen in Vancouver.

The Canucks traded the much-maligned prospect on Sunday to the Florida Panthers in exchange for Juho Lammikko and Noah Juulsen.

Here’s what you need to know about the two newest members of the Vancouver Canucks.

1. Can play centre and kill penalties

Lammikko could end up playing a lot of games for the Canucks this season.

The Brandon Sutter injury has hurt the team’s centre depth, which is part of the reason Lammikko was targeted in this return.

The 25-year-old has played both centre and the wing during his two seasons in the NHL. He’s also seen some time on the penalty kill. Lammikko was actually on the ice for the fewest shot attempts against among all of Florida’s regular penalty-killing forwards last season.

Based on Vancouver’s precarious situation shorthanded, they’re hoping Lammikko can have a similar positive impact for the team in 2021-22.

2. He was selected one pick ahead of Nikita Tryamkin

Back in 2014, Lammikko was a prospect on the rise playing over in Finland. He got into 20 games in Finland’s highest hockey league, and posted six points in five games at the World U18’s.

That led to the Panthers selecting Lammikko at 65th overall in 2014 — one pick ahead of infamous Canucks defenceman Nikita Tryamkin.

3. Went back to Europe after entry-level deal expired

Throughout his hockey career, Lammikko has bounced back and forth between Europe and North America.

After being drafted by the Panthers, he left Finland to play for the Kingston Frontenacs of the OHL. He briefly returned to Finland in 2015-16 before signing an entry-level deal with the Panthers.

In 2018-19, Lammikko broke into the NHL, suiting up for 40 games (zero goals, six assists). However when his deal expired, the 6-foot-3 Finnish forward decided to return to Europe in hopes of improving his offensive game.

He spent two more years in Europe, playing in both Finland’s Liiga and the KHL before returning to Florida in 2020-21.

4. Contributed to “the best day in Finnish history”

For many Canadians, the annual World Hockey Championships take a major backseat to the NHL playoffs.

In Finland however, it’s apparently the biggest hockey event of the year.

So in 2019, when Finland’s lacklustre roster ended up beating both Russia and Canada to win gold, it was seen by many as “the best day in Finnish history.”

At the time, Lammikko was one of the only NHLers on that team, along with young defenceman Henri Jokiharju.

1. He could go directly to Abbotsford

Juulsen already cleared waivers with the Panthers earlier this month. Because of that, he can be sent to the AHL by the Canucks without going through waivers again.

However, with Travis Hamonic clearing waivers and the right side of the blue line looking shaky, there’s a chance that Juulsen sticks around with the team to start the season.

Assuming Juulsen gets sent down to the AHL, the Abbotsford Canucks faithful will have another local product to cheer for.

Juulsen is a product of Abbotsford, playing there throughout his minor hockey career before being drafted by the Everett Silvertips of the WHL.

The magic of the 2015 NHL Draft hasn’t rubbed off on Juulsen.

The Montreal Canadiens selected him with the 26th overall pick 2015. While most of the big stars from that class were off the board by pick 26, players such as Anthony Beauvillier, Sebastian Aho, and Vince Dunn were selected after Juulsen.

Juulsen earned a full-time spot with the Canadiens to begin the 2018-19 season. He looked solid there on a third-pairing with Mike Reilly, where the two also posted strong possession numbers on the penalty kill.

However, Juulsen’s career took a turn for the worst on November 19, 2018. He was hit in the face by a puck twice, resulting in facial fractures that caused subsequent nerve and migraine issues for the next two seasons.

In nearly three years since that night, Juulsen has played just 29 games between the NHL and AHL.

There isn’t a lot of offence in Juulsen’s game, but what he does provide is mobility, physicality, and a willingness to block shots.

“[Juulsen] played like he needs to be playing.” Bouchard said. “Shepherd’s pie. Corn, meat, and potatoes. That’s what we say in the room all the time. That’s his style of play. I’ve known Noah a long time. He keeps it simple, he stays strong with and without the puck. That’s the recipe for him. You need guys like that. You need guys that are solid, that are not complicated and keep it simple.”