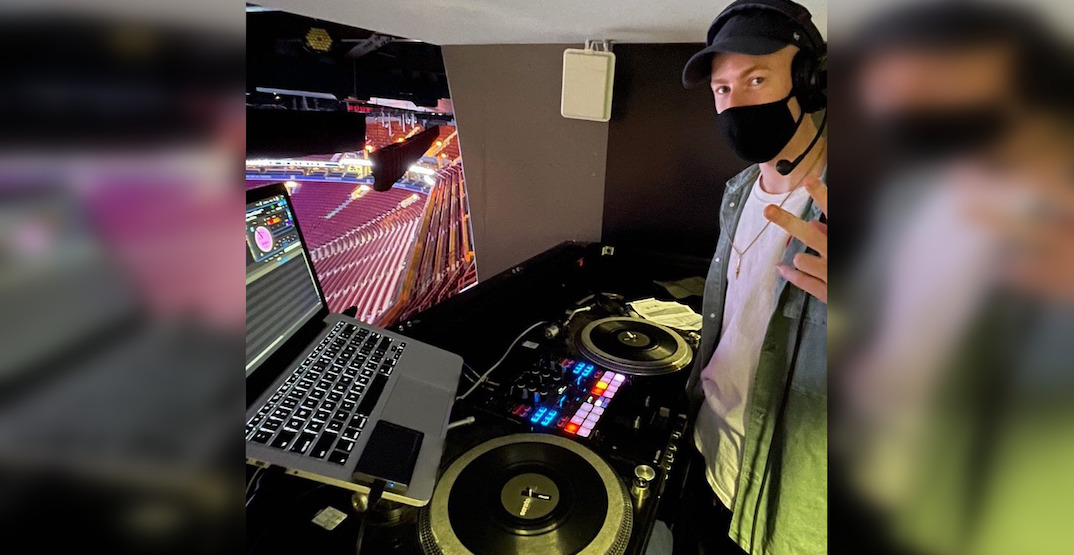 There’s a new person in charge of playing music at Rogers Arena this season.

Tom Fleming is bravely stepping into the Vancouver Canucks DJ booth after winning a three-person competition during preseason to secure the gig.

A native of Halifax, Fleming flew from the other end of the country, paying his own way, just to have a chance to become the next Canucks DJ.

“I basically had to fly myself out on my own dime, just to make it happen, because I really wanted it,” Fleming said in an interview with Daily Hive.

Fleming must have impressed the right people during his tryout at a preseason game against the Seattle Kraken on October 5, because he got the job. Less than a week after accepting the position, Fleming packed up and moved to the west coast.

Fleming has never been a DJ for a hockey team before, but he’s not new to the sport. In fact, hockey led him to music, and in turn, music led him to the NHL.

“I played hockey my entire life and that’s kind of what got me into DJ’ing in a funny way. I was a goalie from a young age until I was 18 years old, and that was my entire identity. That was everything about my life. I lived, breathed, slept hockey. It was my thing.”

Fleming was hit with an auto-immune disease as a teenager. It caused him to lose some of his vision, resulting in him having to give up playing the game he loved.

He said it was a tough time in his life, and he still has some vision loss to this day. It’s difficult for him to see in a dark nightclub, and he’s not comfortable driving because of it. He won’t have issues inside of Rogers Arena though.

“I started losing some of my vision, so I couldn’t really play hockey anymore. So that whole identity almost got scrapped. I sold my goalie gear for turntables cause I also loved music on the side as well. I put my whole energy and attention into DJ’ing. Years down the road, funny enough, it kind of brought hockey back into my life.”

Fleming has spun music at a few sporting events before, but has mostly worked in nightclubs. He’s ready for the new challenge that lies ahead.

“I’m so excited about Vancouver and so excited to play for a large crowd, and make people happy.”

While his enthusiasm is palpable, Fleming is stepping into an impossible job. You can’t please 18,000, and if you play the wrong song, you could have an entire fanbase angry at you.

“I’ve heard about that,” Fleming said when asked about the great Chelsea Dagger controversy of 2018. “I did my research on the team, the music, and everything to not play.”

Expect to hear every kind of genre of music, not just limited to old favourites.

The most high-profile songs, like the goal song, aren’t only up to the DJ, though. Those are collective decisions with the Canucks game presentation team, but Fleming does get to provide input.

Fleming will get more freedom during intermissions, when he’ll put together sets while on the DJ cam.

“I want to keep it fresh this year. Obviously, giving people their classics that they expect to hear at a hockey game, but also give them the twist that they might not be expecting but also kind of enjoy as well.”

“I just want to do a good job for the people. I’m really excited to make Vancouver home.”