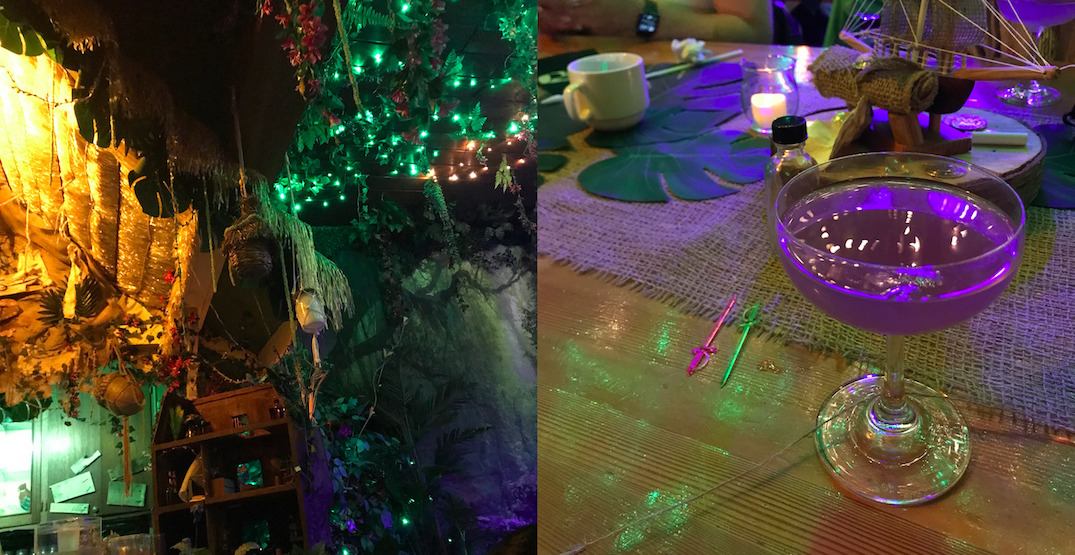 The immersive bar experience has been a popular concept in Vancouver as of late.

The most recent installment is Neverland: An Immersive Peter Pan Inspired Bar experience, brought to us by the same folks who organized The Alice and Wizard’s Den pop-ups.

For the immersive cocktail events, a secret location – in this case, the Vancouver Alpen Club at 4875 Victoria Drive – is fully transformed into the world of the classic tale.

We got to check out the Neverland pop-up before it opens today, and here’s what we thought. 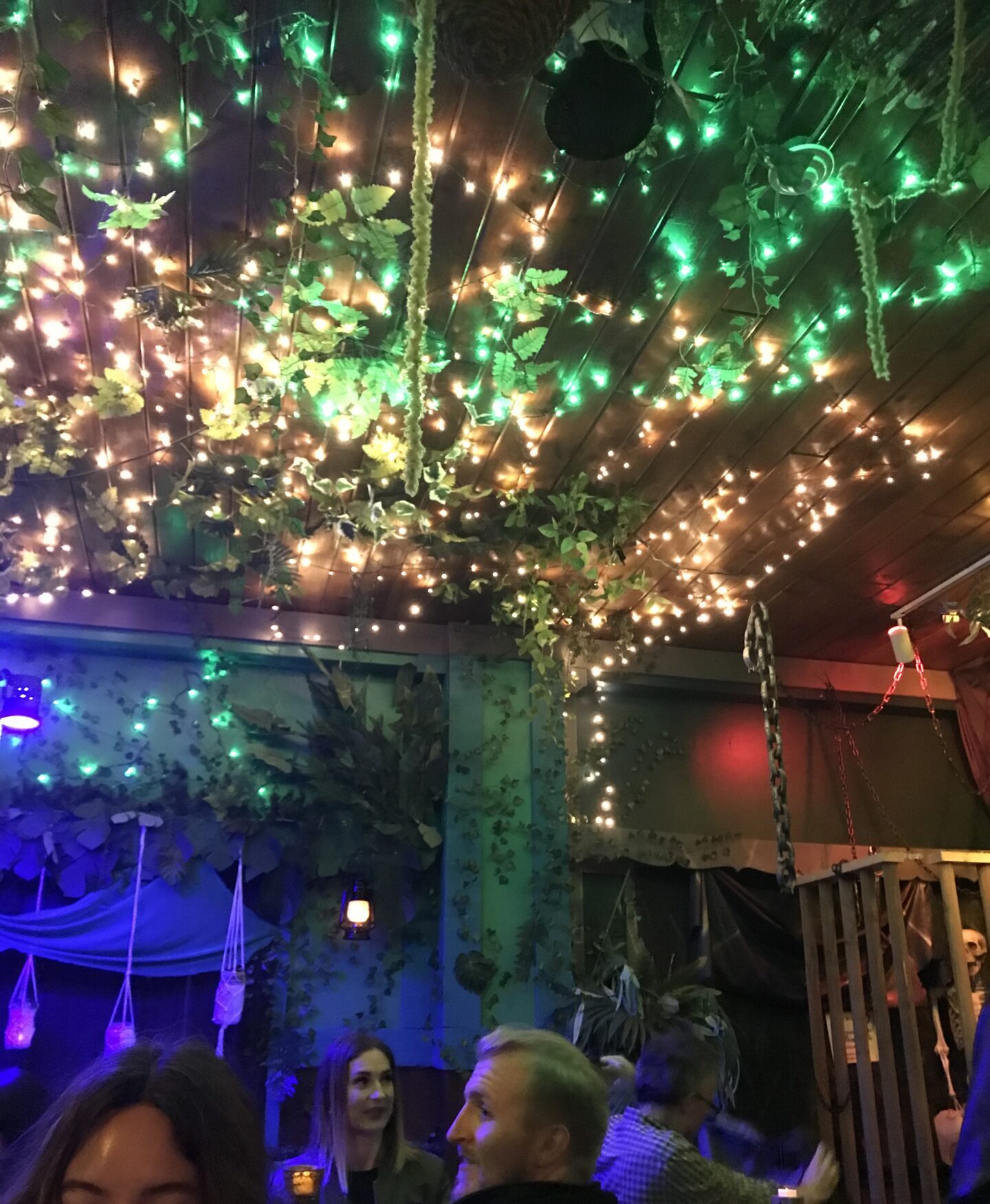 When you first enter the space, you’re immediately transported to the Lost Boys’ hangout. There’s a space that looks like the Lost Lagoon, a corner set up as the Jolly Roger ship, and other pirate-inspired decor throughout, like skeletons and piles of treasure.

Guests are offered a drink to start – your choice of wine, peach ale, or creamsicle beer – while a Peter Pan character invites all the guests to be part of the Lost Boys club.

Don’t come here expecting just a drinking experience – it’s as much a theatrical, performance-based experience as it is an immersive cocktail bar. 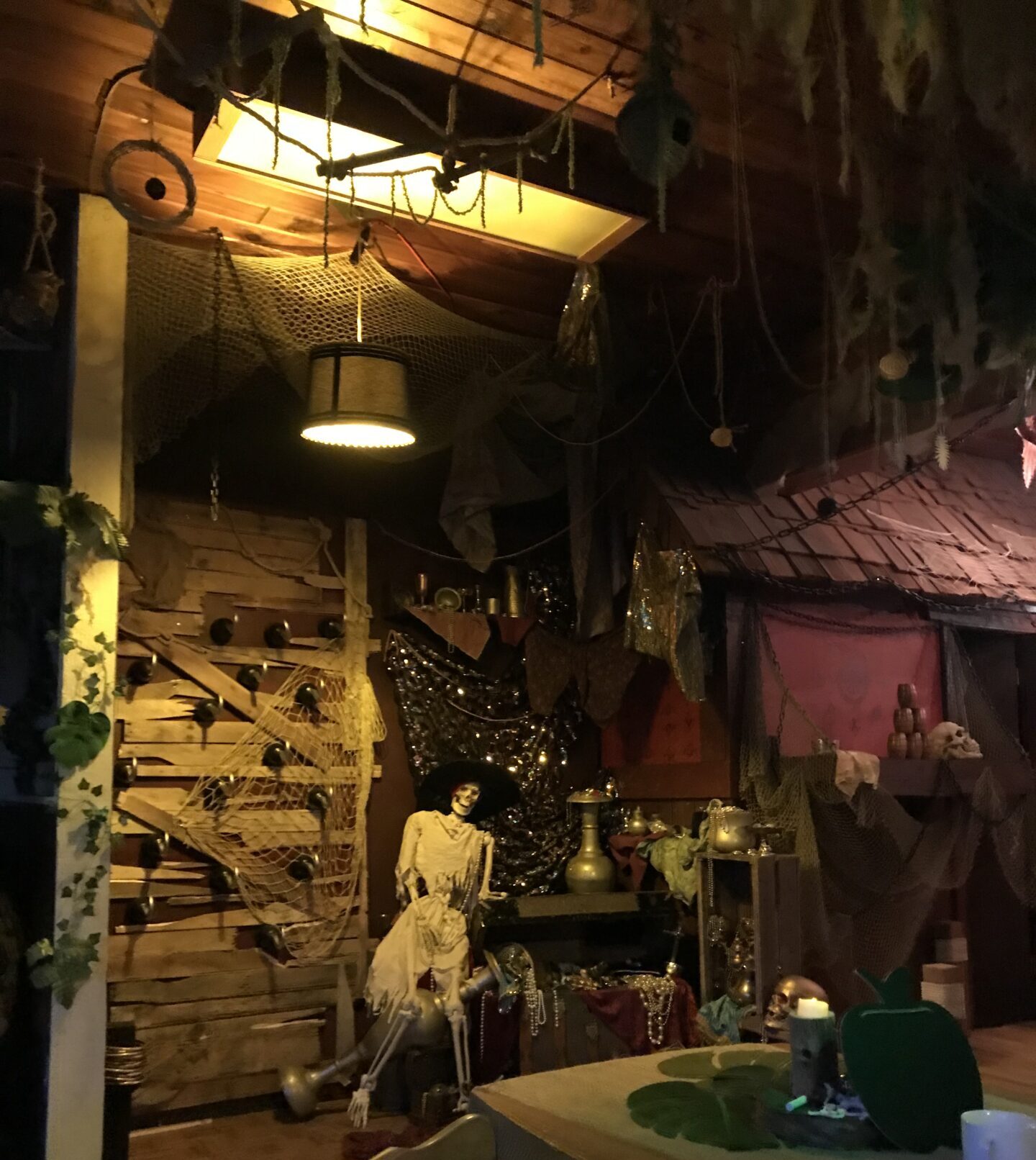 There’s a Hook character, complete with the long red coat and big curly wig, as well as a couple of pirates who lead you through the two-hour experience.

In order to get your second drink of the evening, you must play three carnival-inspired games which, once completed, will get you one doubloon – three of them gets you a cocktail.

The games include shooting a bow and arrow at a map (don’t worry, they’re suction cup children’s toys so no one’s getting hurt here), throwing a bean bag at stacked barrels to knock them down, and tossing gold rings at a wall of hooks. 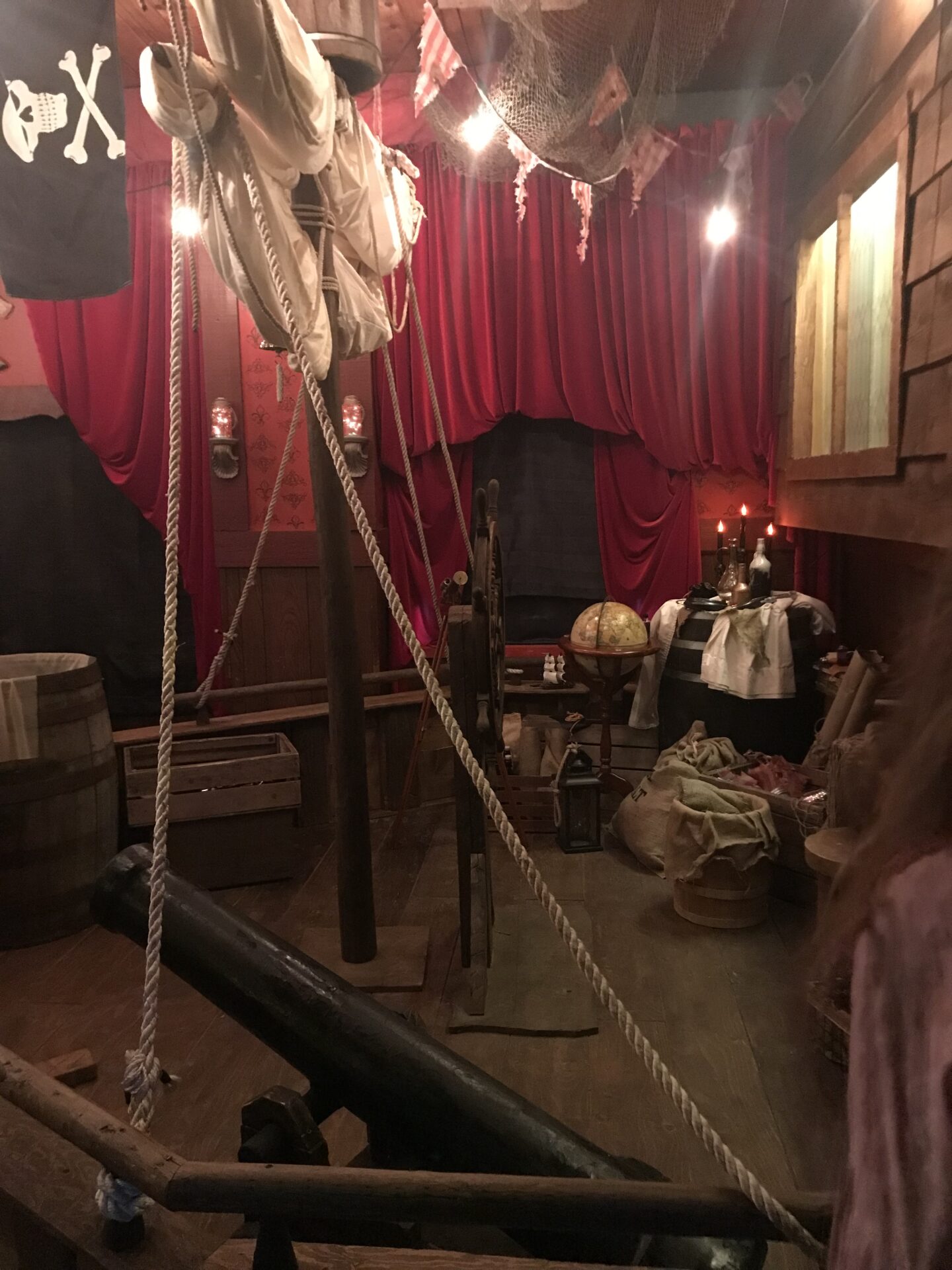 This part of the evening does take a while – with so many guests and a somewhat small space, it was tough to have your go at the games, which means you’re waiting a bit for that second drink, something that likely would have helped with accuracy.

The second cocktail is a rum, coconut, orange concoction served in a skull-shaped glass with dry ice to give the effect of it being served on a very spooky pirate ship – a fun touch that definitely added to the immersive quality of the evening. 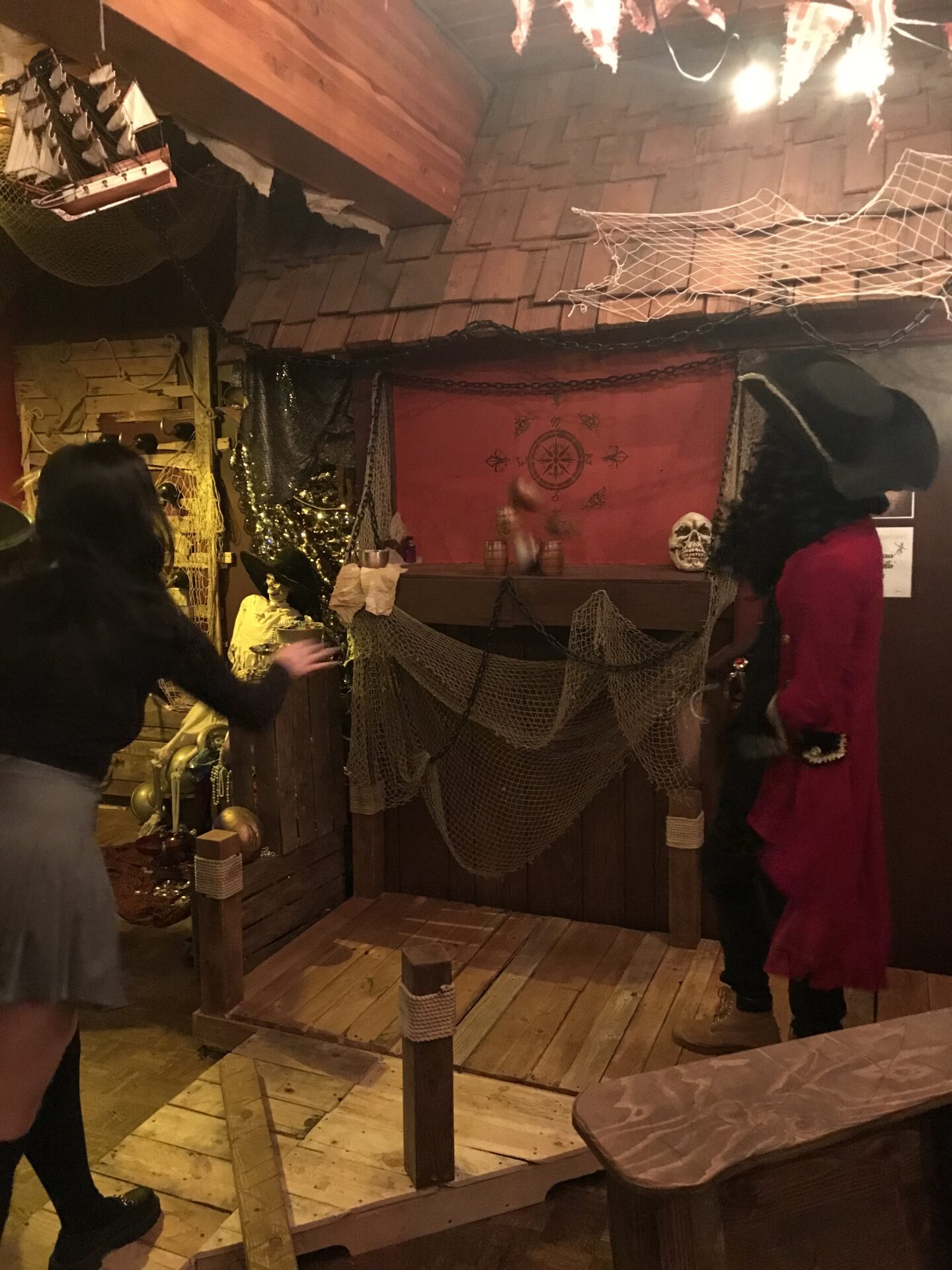 There’s a couple more games involved, including singing some sea shanties (yes, get ready to sing) and a hunt for little vials of “magic potion” to help Tinkerbell come back to life. The experience is structured by a narrative that loosely follows the classic tale, with Tinkerbell – who’s been kept hostage in a Mason jar by Captain Hook – eventually getting back her magic while we, the guests and honourary Lost Boys, mix cocktail potions and chant “I do believe in fairies, I do, I do.”

The little vial of purple “potion” is one part of the final cocktail. We’re given a coup glass of lemony mix, which you then pour the purple potion into, resulting in a magical, shimmery drink that is also the strongest of the evening. 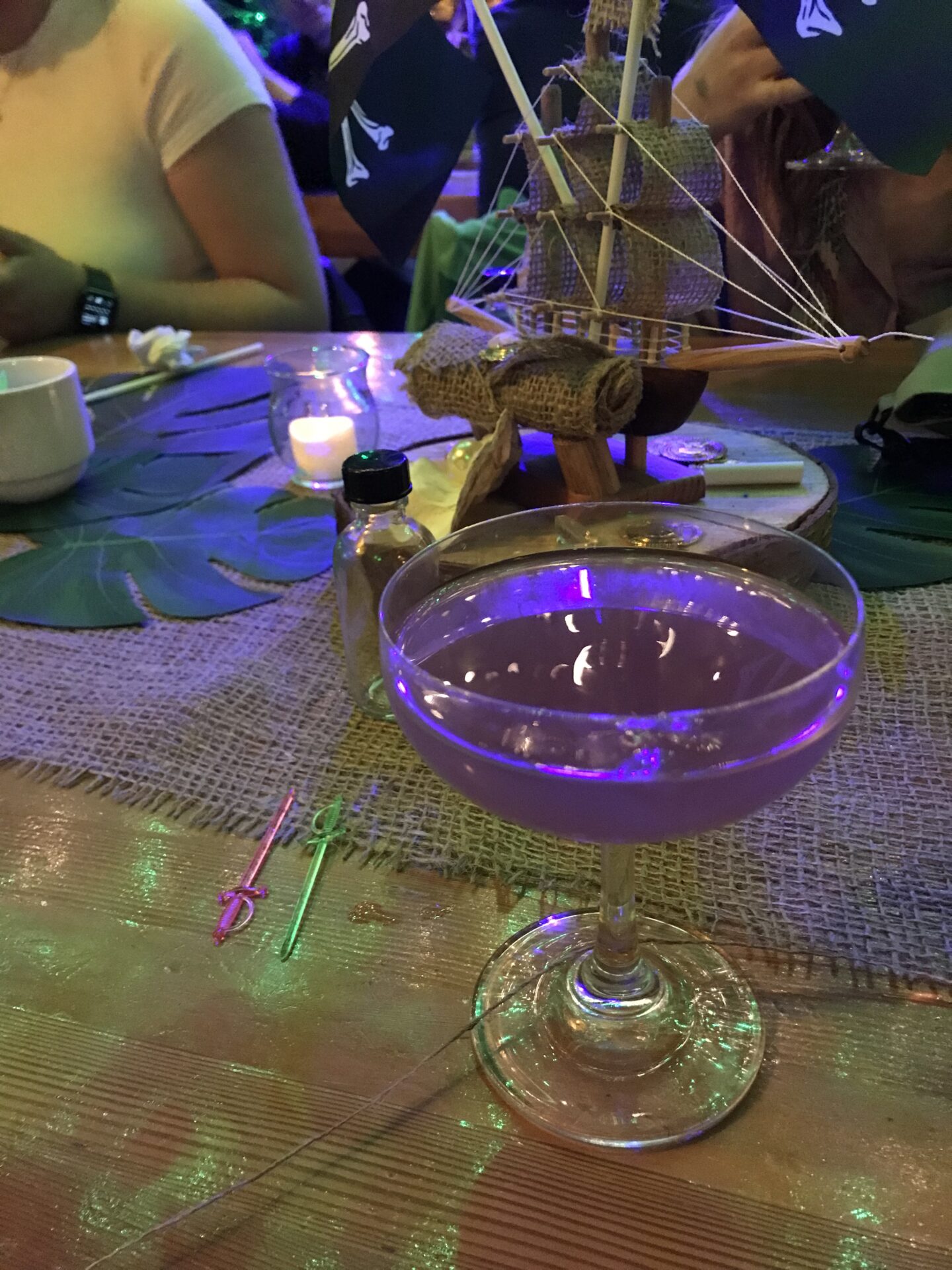 The Neverland experience is for the adult who, like the Lost Boys themselves, wishes they didn’t have to grow up. It’s a fun way to revisit a childhood classic, and definitely feels like an adult, boozy kind of Disneyland.

It was a one-of-a-kind cocktail experience – one that is best enjoyed with friends – where the more you get into it, the more fun you’ll have.