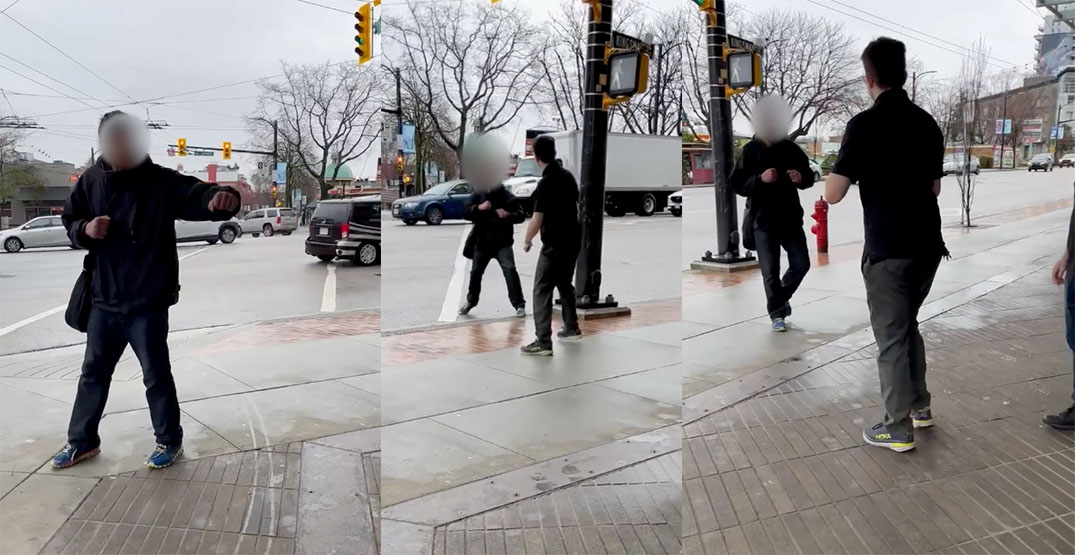 A grocery store employee was apparently punched in the face by a shoplifter in an altercation Tuesday morning at Broadway and Kingsway.

Mount Pleasant resident Darren Reiter was walking by the Nester’s Market around 9:30 am when he saw the commotion. He saw the shoplifter punch the store manager in the face, and pulled out his phone to film immediately after.

“I’m not trying to criminalize people who are already having a difficult time. No one should have to fight for food,” Reiter told Daily Hive. “But obviously you don’t want to see these frontline workers getting assaulted.”

The shoplifter apparently left the store after the cereal box he was holding was taken away, but came back with fists raised in an exchange Reiter captured on video.

“You already hit me once, so [expletive] off,” an employee says.

“[Expletive] you, I’m trying to get some food, man,” the man replies.

“If you’d asked me I would have given it to you. You can’t steal, man,” the employee replies.

When Reiter offered his video to the store manager to include in his report, he was surprised when the manager brushed it off — saying that was the third time he’d been attacked that morning.

The manager also apparently suggested reporting it to police would be futile.

“I think these kinds of incidents are happening way more than we realize,” Reiter said. “If we don’t report these things, then the statistics are not going to be accurate — and the government is driven by data.”

Daily Hive also reached out to Nester’s for comment, but has not yet heard back.

Reiter decided to make the video public because he doesn’t believe anyone, especially frontline workers at a grocery store, should have to deal with getting assaulted while at work.

He said he’s witnessed violent incidents in Mount Pleasant before, including one instance where an individual pulled a knife on Kingsgate Mall security staff.

“Why are residents being put into positions where they have to make decisions like ‘Hey, should I intervene in a knife fight today?'” he said. “If people feel like they need to fight for food, then you know we’re missing something.”