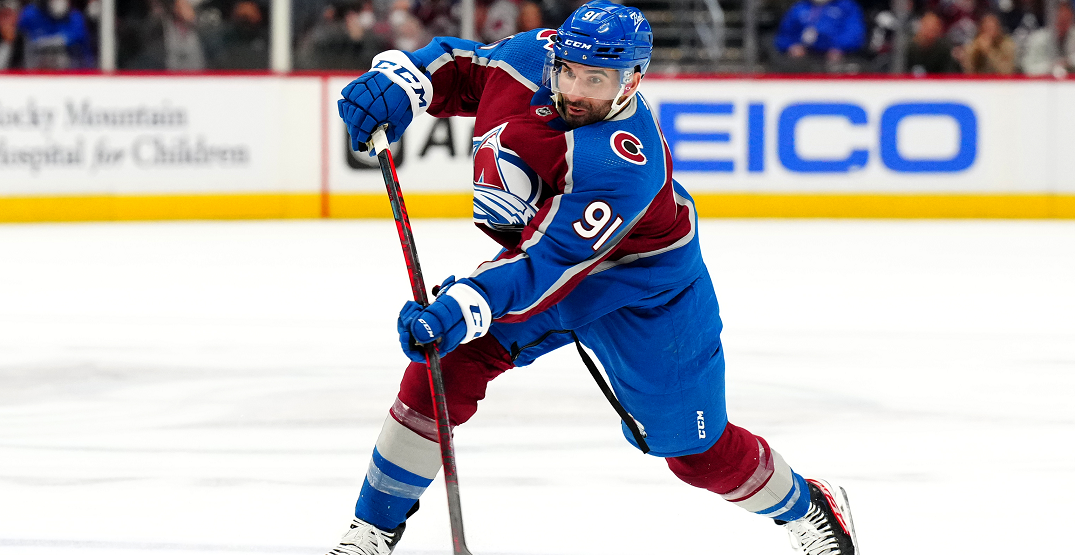 Trigger warning: This story contains descriptions of racial slur usage and abuse that some readers may find traumatic.

But despite the strong performance, it’s not hard to imagine that Kadri’s mind has been elsewhere during the series.

Kadri, who is Muslim and of Lebanese descent, has been the subject of continual online racist attacks following a collision with Blues goaltender Jordan Binnington during Game 3 that forced Binnington out of the game, as well as missing Game 4 of the series.

Kadri and Blues defenceman Calle Rosen fell into Binnington after a net-front battle, with no penalty or supplementary discipline assessed on the play.

“Great game tonight. Very proud of Nazem. But I wanted to shine light on what the last 48 hours has looked like for us as a family,” Kadri’s wife Ashley wrote in a series of Instagram stories posted on Monday evening.

The stories are graphic in detail and contain multiple uses of racist slurs and threats directed at Kadri.

Nazem Kadri’s wife shares what their family has endured for the past 48 hours through the Jazzy Kadri Instagram account.

These racist attacks are sickening. pic.twitter.com/pLWeEs0K7y

“This is just a small example. There are many many more. This behavior doesn’t belong in sports, anywhere. If you are not condemning racism, then you are tolerating it. Praying for the world to be a better place with more love and less hate,” Ashley added.

Kadri joined the Avalanche in the summer of 2019 after being sent in a multiplayer trade from the Toronto Maple Leafs.

“People need to be aware that this stuff still happens,” the NHLer said following Game 4. “It’s hurtful. I know a lot of people don’t have to deal with that, and they might not understand what it feels like, but people are trying, which I appreciate. At the end of the day, I’m a good hockey player and I just try to provide for my team and try to put all that aside. And I just worry about some people, some kids, that maybe aren’t as mentally tough as I am and have to go through that scrutiny and that criticism and that’s why I want to do the best I can to help.”

Nazem Kadri speaks on the racist messages and death threats he received ahead of Game 4. pic.twitter.com/7st5vdIvtK

“For those who hate, that was for them,” Kadri shared in a separate interview on TNT.

"For those who hate, that was for them."

Nazem Kadri spoke to the panel about his performance tonight in St. Louis and dealing with the threats he received after Game 3 pic.twitter.com/w88yIGm7Yf

Binnington himself threw a water bottle at Kadri following the incident, which was later confirmed by The Athletic’s Peter Baugh.

"Not sure if he just threw a water bottle at me" 😳

Nazem Kadri appears to have a water bottle thrown at him while discussing the collision with Binnington 🔎 pic.twitter.com/6XLbAdxEEm

Former NHLer Akim Aliu shared on Sunday that police had been brought in as a result of the racist attacks.

Talked to @43_kadri
About his inadvertent collision w Binnington. Naz has been subject to so many racist attacks and threats since last night that police had to be brought in. Racist attacks like this have no place in hockey and should be investigated and reported on.

I'm told that Kadri had police stationed outside his hotel room door full-time here in St. Louis from Game 3 on

The series shifts back to Colorado tomorrow night, where Kadri and the Avalanche have a chance to close out the Blues.