Get ready for one hell of a mind-bending trip.

Jeff VanderMeer’s chilling – and seemingly unfilmable – bestseller gets the big screen treatment thanks to Ex Machina-helmer Alex Garland. Those worried about a sophomore slump can rest easy; the director’s second feature is another ambitious spectacle that will have you talking long after the credits have finished rolling.

After her husband Kane (Oscar Isaac) inexplicably returns home, after over a year, from a mysterious military operation, Lena (Natalie Portman) has some questions. Where has he been all this time? And more importantly, why does he seem so messed up?

Kane suffers some kind of medical episode and is quickly whisked away to a clandestine government facility in the Florida swamp known as Area X.

Lena accompanies him to get answers, only to find out a bizarre quarantined zone is located right near the base. It’s a purplish undulating region, known as The Shimmer, and was the destination for numerous failed exploratory missions, including the one Kane was on.

No one seems to know what’s inside, but The Shimmer is expanding and tensions are rising. Another team is sent in that includes Jennifer Jason Leigh, Tessa Thompson, Gina Rodriguez, Tuva Novotny, and (at her insistence) Portman.

Once inside, the women begin seeing strange plant and animal mutations that defy conventional, earthly physics. It’s clear The Shimmer is messing with the cellular structure of the environment but the questions continue to pile up.

So, just take a breath because it’s a lot to unpack. Thankfully, the masterful Garland is more than up to the task.

Annihilation represents the very best that science-fiction films have to offer. It’s an unapologetically ambiguous, metaphysical deep dive into the laws of nature. There is some seriously thought-provoking stuff at play here.

Although the movie features a smattering of elements from VanderMeer’s entire Southern Reach trilogy, Garland’s adaptation really hones in on the theme of self-destruction from the first book. The foundation is essentially a fascinating study in human psyche, emotions, and relationships with very high-concept science built around it.

The cast is fantastic. Portman’s insatiable quest for answers and fearless ferocity anchor the narrative. Both Jennifer Jason Leigh and Tessa Thompson are subtly brilliant and Oscar Isaac churns out another memorable performance. Plus Jane the Virgin’s Gina Rodriguez sheds her good girl image from TV to become a bona fide big screen badass.

The film’s aesthetic – especially inside The Shimmer – is consistently striking, although the oversaturated lighting and occasionally clunky visual effects point to some budget constraints. And the musical score from Ben Salisbury and Portishead’s Geoff Barrow is positively haunting. 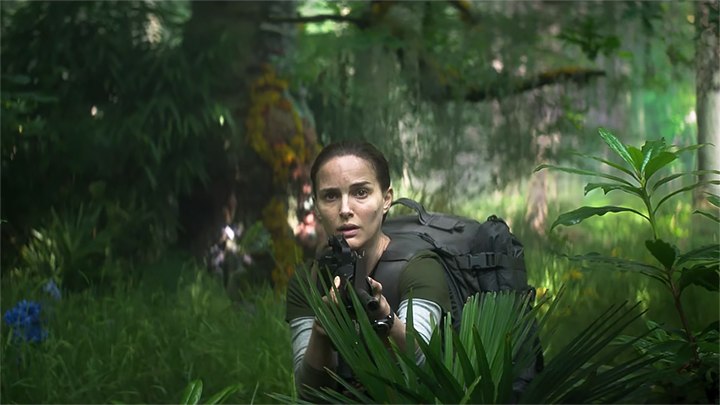 While not necessarily derivative, Annihilation may remind audiences of certain notable predecessors; Alien, The Thing, Arrival, Under the Skin, and even Garland’s own Ex Machina come to mind. Make no mistake though, this film bears a unique stamp and marks yet another staggering addition to the genre.

Much like Paramount’s gamble last year with Mother!, this is another polarizing one for the studio. Executives were so concerned about the film’s reception they made a deal with Netflix for the international rights. As such, it will only be seen on the big screen in North America and China.

There are no tidy explanations in Annihilation and it is admittedly a bit of a head-scratcher. That’s also the fundamental reason why this kind of intelligent movie needs to be cultivated by studios and released in theatres. The film is bold and daring, leaving just enough mystery dangling for the viewer to discuss or debate.

Ultimately, you can play it safe at the movies or you can take some risks. My money’s on the latter.

Annihilation earns 4 1/2 out of 5 pieces of popcorn.

Playing at a theatre near you. Rated 18A and is 120 minutes long.