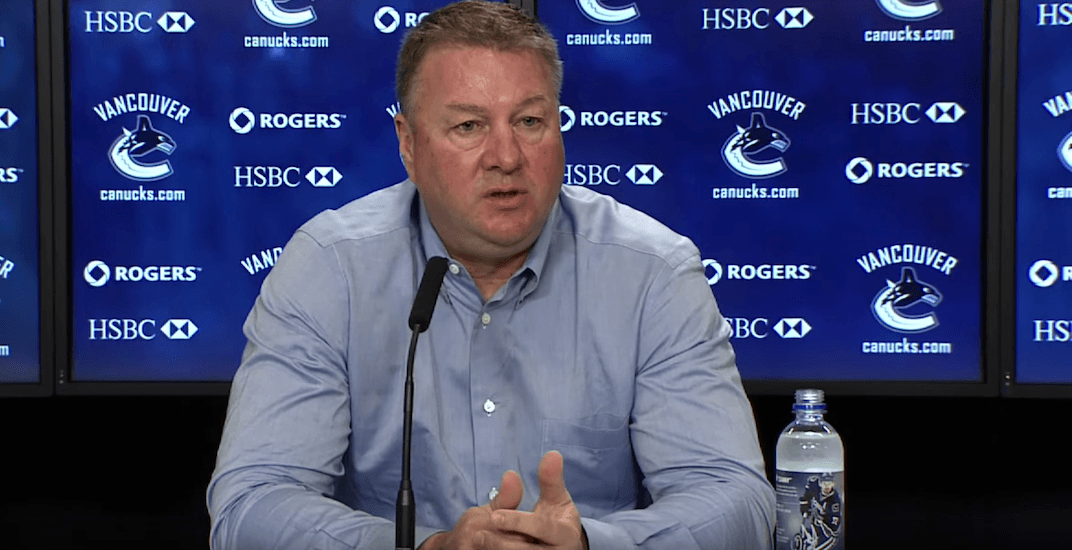 With Mike Gillis’ name creating a firestorm in the media last week after it was mentioned in connection with the Edmonton Oilers’ search for a new general manager, the table was set for the former Canucks executive’s Wednesday appearance on TSN 1040 radio.

During his two-hour in-studio interview with Matt Sekeres and Blake Price, Gillis spoke about the Oilers and he delved into many of the progressive ideas he brought to the Canucks.

From the moment he took over as the GM of the Canucks in 2008, Gillis was known as someone who brought new ideas to the table. He wasn’t afraid to try new things and to turn every stone over to find a competitive advantage.

Despite being relieved of his job five years ago, some eye-opening stories are still emerging.

While the 60-year-old former president and GM has been out of the NHL for six years, he has spoken publicly about returning to the league under the right circumstances.

Though that doesn’t appear that it will be in Edmonton.

Asked if he’s been in contact with Oilers owner Daryl Katz or team president Bob Nicholson, Gillis replied: “I’ve never spoken with them (about the job). The last time I spoke to Bob was at the World Championships, I think, last year in Dusseldorf.”

Oilers fans and media may find his assessment of the Oilers interesting, though.

“Edmonton is in some ways like the Canucks team we took over – two really high-end players, a really good second/third line centre in [Ryan] Nugent-Hopkins, some relatively young defencemen,” said Gillis.

“They don’t have the goaltender, but in a lot of ways it’s similar.”

Gillis elaborated on the type of situation he is looking for, should he choose to return to NHL management.

“They need to be forward thinking, prepared to experiment, prepared to look at leadership and culture as part of a daily training environment, and then bring in the right people that can stay aligned with the vision and make it happen,” he said.

Another interesting story from Gillis was hearing him talk about how Vancouver used analytics to bring out the best in the players they had.

“We had analytics guys go through a study to find out what had to happen for Ryan Kesler to score a goal,” said Gillis.

“So we went about trying to find players who could do that – were really good puck retrieval, smart players. Chris Higgins was one of them. Of course we put him on the power play where he would be in front of the net, he caused a lot of trouble, he scored a tremendous amount of goals.

“That’s how he went from being a third-line centre to a Selke Award winner who scored 40 goals.”

A better version of Kesler

If you’re a Canucks fan and you’re wondering what Gillis would do to surround the current emerging Canucks core of Elias Pettersson, Bo Horvat, Brock Boeser, and Quinn Hughes, one astute listener did ask that question.

“I want speed around those guys because none of them are particularly the fastest players out there,” said Gillis.

Turning the plane into a ‘mash unit’

One of the most radical changes Gillis worked on surrounded injury recovery.

“There is a direct correlation between fatigue and injuries. There has been forever,” explained Gillis.

“This is some crazy stuff, but when I was with the Canucks, one of the things we were looking at was almost trying to turn the plane into a ‘mash unit’ so you could have the most recovery possible. That meant reducing the internal pressure to reflect more sea-level pressure and we had different types of machines that would assist in recovery, getting rid of lactate and different things like that.”

Unfortunately, the idea of the flying mash unit was stopped before it got off the ground: “We ultimately got to the engineers at Air Canada and the FAA was not going to approve any of it.”

“It compromised the integrity of the fuselage apparently.”

With his name causing so much backlash in hockey circles just this past week, Gillis spoke about how the new ideas he brought to hockey rubbed many the wrong way.

“We were doing things that some of the other, mostly older guys, didn’t like,” said Gillis.

“I’ll give you an example: when the draft of the schedule would come out, Laurence [Gilman] and I would get on a plane as quickly as we could and we’d go to New York.”

Gillis explained that they worked on modifying the schedule with the NHL head office based on an algorithm they created that included travel and other issues.

“Other teams heard we were doing this … Suddenly complaints started coming in that we had resources that they didn’t have and we shouldn’t be able to go in there and do this stuff.

“The same thing happened with analytics and other things. There were complaints from some of the other GMs about the fact the Canucks had resources that they were applying in this area: ‘We don’t have them so they shouldn’t be able to do them.'”

Why Tanev gets injured all the time

Another interesting insight came when the former GM spoke about Chris Tanev’s recurring injury issues. By the end of this season, Tanev will have missed 121 games in the five years since Jim Benning took over as GM.

“From the very first game [Tanev] played you could see why [injuries were] going to be a constant problem,” said Gillis.

“He wants to make really good plays so he hangs onto the puck maybe a little bit longer than he should. He wants to block shots so he’s blocking every shot he possibly can block, and he gets hit a lot because when he goes in to retrieve pucks, he’s always trying to do something.

“Consequently, he gets hit a lot, he gets hit with the puck a lot and it’s too bad because he’s a really good player.”

Interesting comments from the GM who brought Tanev to the Canucks, especially when you contrast them against what Benning told Sportsnet after signing Tanev to a five-year extension in 2015.

“You know what we call that around here?” said Benning. “Mental toughness. (It’s) the ability to take a hit, and hang on to the puck to make a play.”

“(Tanev) is mentally tough. He’ll absorb hits, he’ll block shots. So even though he doesn’t have the traditional physical build of, y’know what we would say is an ‘old-school defensive defenceman’ that is physical and hits… he’s able to play a good strong defensive game.”

Gillis also said that if he doesn’t find the fit he is looking for in an NHL team, he’ll be satisfied walking away from the game.