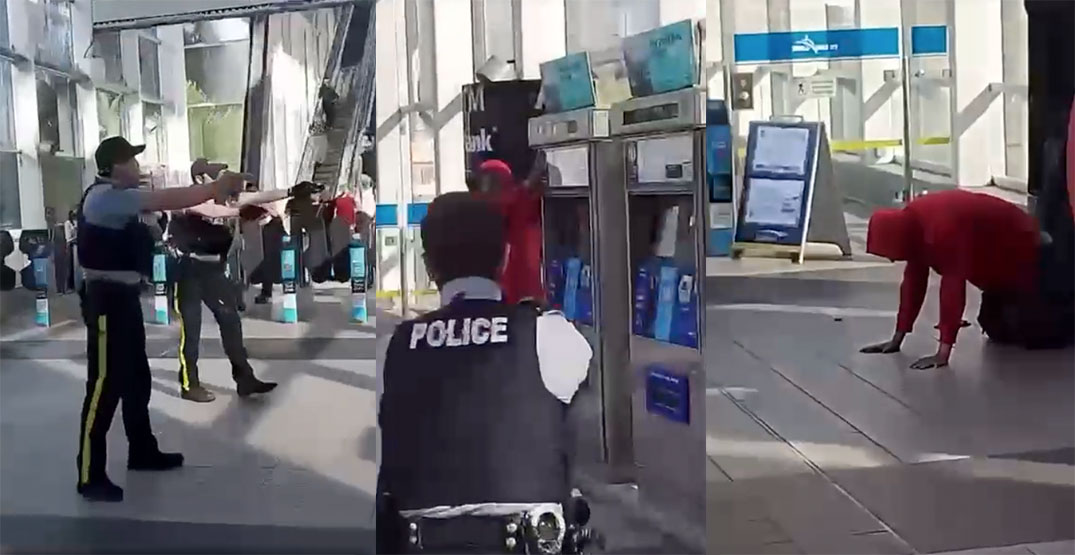 A teenager sprinted up an escalator at Metrotown Station Tuesday trying to escape police as officers tried to arrest him for allegedly threatening strangers with a knife.

The altercation happened around 5:15 pm yesterday and was captured on video by a witness. The footage was uploaded to Snapchat and is now circulating widely on WhatsApp.

The video shows the boy in a red sweater kneel on the ground, get up, get tased, and slip past police and up an escalator.

Several officers had their weapons drawn during the tense moment and Cpl. Mike Kalanj confirmed a taser was deployed “but it was not effective.”

The suspect, a 17-year-old, was reportedly being aggressive and using a knife to threaten strangers at the busy Burnaby mall. He fled the mall toward Metrotown SkyTrain station, where officers intercepted him.

Kalanj said the suspect dropped his knife, before reaching for a second knife. He dropped to his knees, but is seen refusing police commands to get all the way on the ground.

An officer kicks the suspect, at which point he gets back up. Officers shout at him to get down and tase him, but the suspect rips the taser off and darts through the SkyTrain doors and up the escalator to the train platform.

That’s where the video ends, but Kalanj said the suspect was arrested upstairs in a SkyTrain car.

He had three knives on him and is facing charges of assault with a weapon and possession of a weapon for a dangerous purpose.