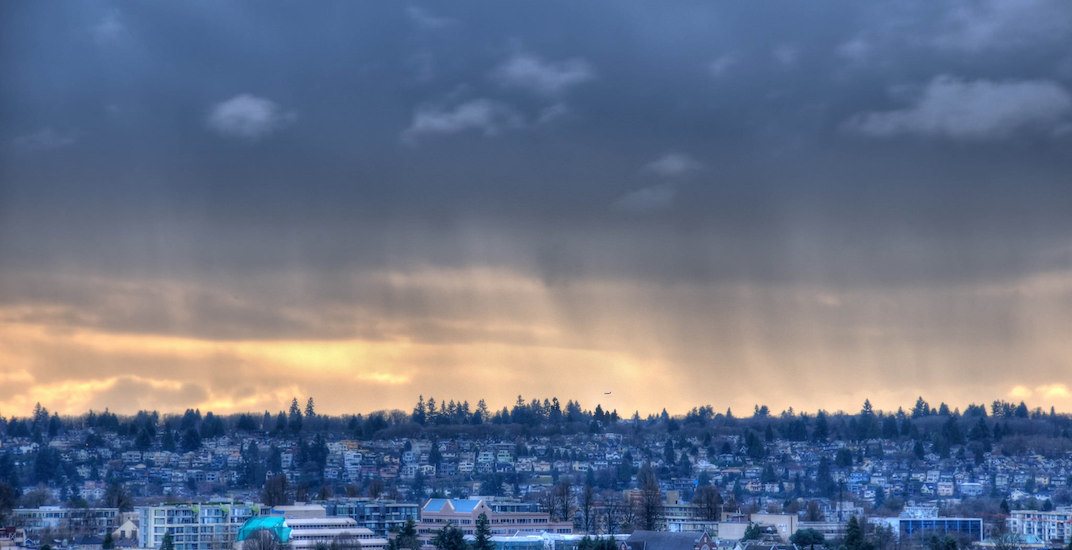 Stormy clouds and rainfall in Vancouver, but sunny skies in the southern horizon. (Doug Farmer / Flickr)

It’s about to get very windy around the BC South Coast. Environment Canada has just posted a special weather statement for the region.

The weather agency says strong winds will start blowing on Tuesday night — and it’s also expected to be quite wet.

“An unseasonably strong low-pressure system will make landfall on Vancouver Island Tuesday night bringing strong southeasterly winds and heavy precipitation to much of the south coast,” reads the statement. “As the cold front passes, winds will shift to strong and gusty westerlies or southwesterlies Wednesday morning, impacting western Vancouver Island, and potentially Qualicum, Victoria, Lower Mainland, and the Fraser Valley. Strong southerlies will also funnel up the Sea to Sky.”

Some areas will also see more rain with 40 to 70 mm of precipitation for West Vancouver Island and the higher terrain of the Sunshine Coast, Howe Sound, and the North Shore Mountains.

Environment Canada says there is still some uncertainty about which communities will experience the strongest winds and warns more alerts could be issued.

On Sunday, rainfall records were broken around Metro Vancouver as the region deals with an exceptionally wet May.