TransLink has announced that it is moving forward with a $2-billion plan to improve public transit services in Metro Vancouver using the federal and provincial government’s previously announced first phase funding.

This will be the first time that the region’s transit system has expanded since the 2009 completion of the Canada Line. In that period, Metro Vancouver’s population has grown by 250,000 people, straining the transit system even further and worsening road congestion.

“Moving forward with Phase One of the Mayors’ Council’s 10-Year Vision will kick start immediate and urgently needed improvements to Metro Vancouver’s transit and transportation network, and deliver long-overdue transit service to keep people moving across the region,” said Mayor Gregor Robertson, Chair of the Mayors’ Council, in a statement.

To fulfill TransLink’s 17% share of the improvement costs, there will be a relatively small regional property tax increase of an average of $3.00 per year and transit fares will go up by between 2% and 3% over three years. During the transit plebiscite, a 0.5% regional sales tax increase was contemplated to

Other revenue will be raised from a new fee on new major developments built adjacent to SkyTrain by 2020 and TransLink’s sale of its surplus properties. Mobility pricing on roads, also known as tolls, will be effective in 2021 or 2022.

A portion of the funding from phase one, about $43 million, will go towards the associated pre-construction design and planning work required for the underground extension of SkyTrain’s Millennium Line under Broadway and the new Surrey light rail transit network. Both rail rapid transit projects, to be built in the second phase of senior government funding, will comprise of the lion’s share of the Mayors’ Council’s ambitious $7.5-billion transit plan. Both projects will cost an estimated $4.5 billion, and funding commitments from senior governments is expected in 2017.

“Phase One of the 10-Year Vision will see Metro Vancouver’s biggest transit expansion since 2009, and lays the groundwork for partnership with the provincial and federal governments on significant long-term projects like the Broadway Subway and Surrey LRT,” continued Robertson.

There will be a 10% increase in bus service across the region beginning in early-2017, including the implementation of five new B-Line frequent express bus routes across various corridors:

Frequency on SkyTrain will increase starting early next year with more service during mid-day and early evening hours to help alleviate congestion.

With funding from seniors level of government, TransLink will proceed with the procurement of a significant number of new and additional trains for SkyTrain. This includes: $112 million for 28 new Mark III cars (seven four-car trains) for the Expo, Millennium, and Evergreen lines to increase capacity by 12%; and $88 million for 22 new cars (eleven two-car trains) for the Canada Line to increase capacity by 55% and reduce crowding.

All of this is in addition to the planned opening of the 11-km, six-station Evergreen extension of the Millennium Line before Christmas 2016.

Map of TransLink’s phase one transit service improvements beginning in 2017. Click on image to enlarge. 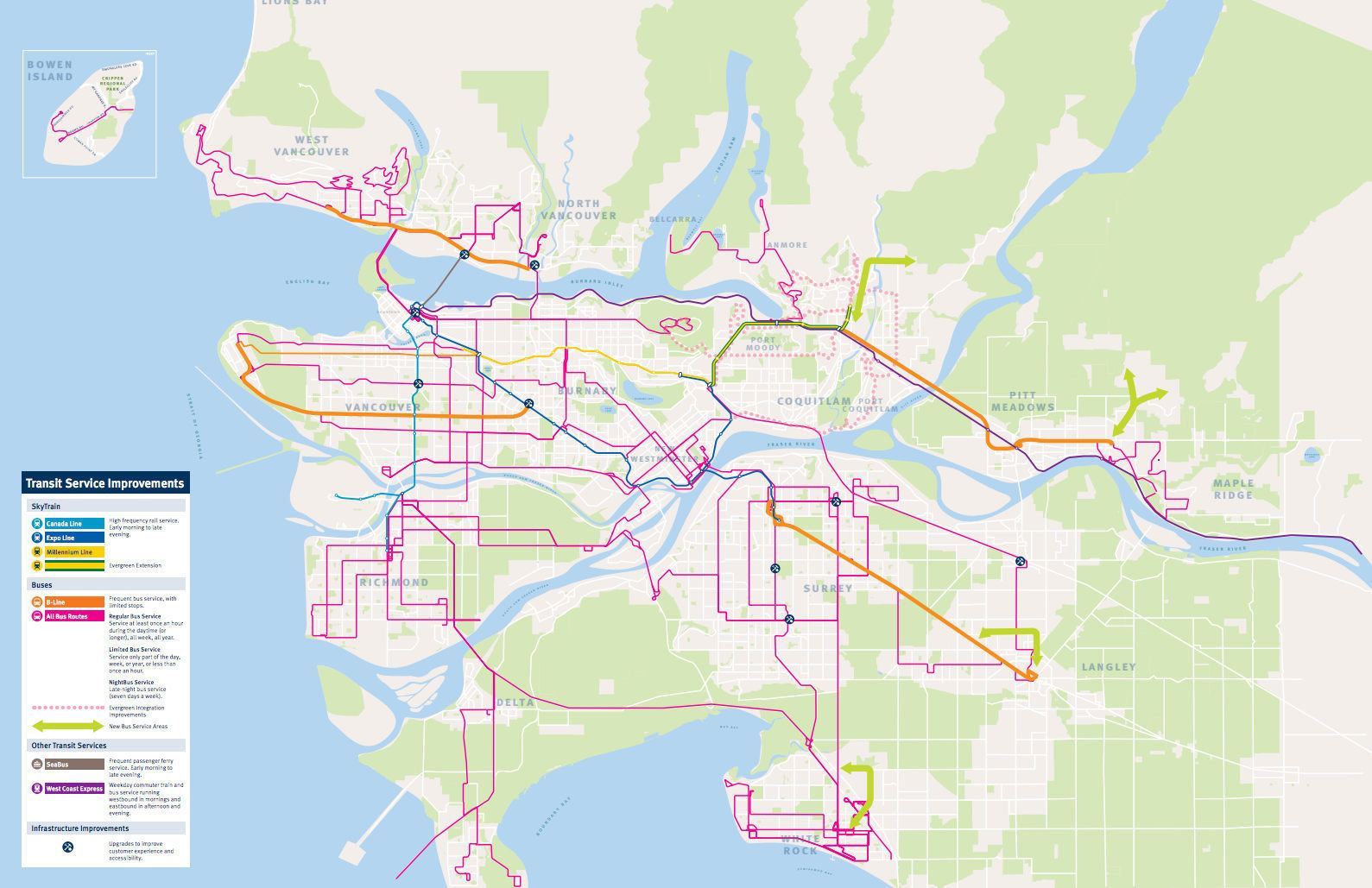