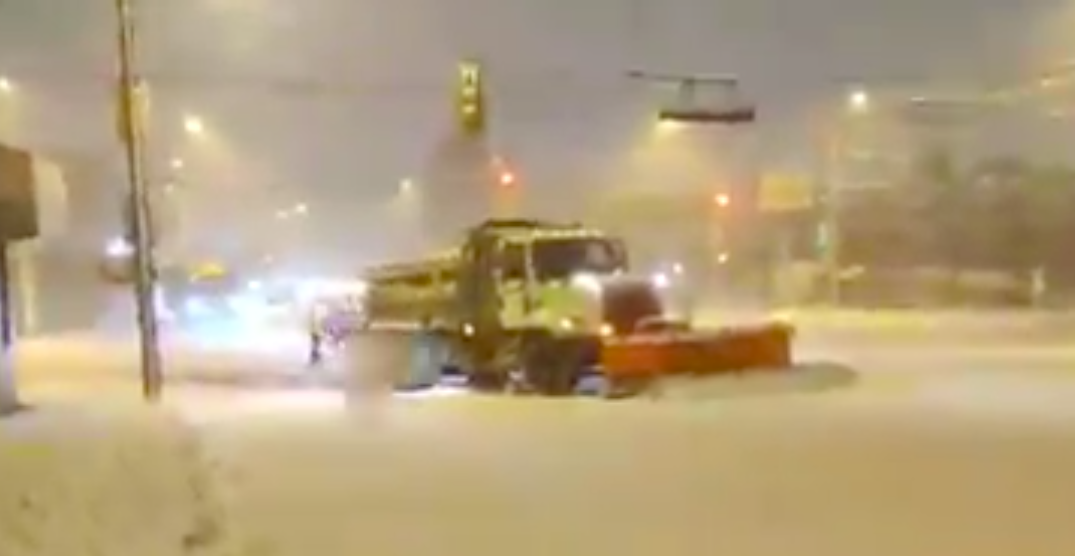 At least one snowplow in Vancouver got stuck last night trying to clear the roads. (FlynnMeredithB / Twitter)

Old Man Winter showed up in Metro Vancouver last night, and it’s fair to say that he more than made his presence known, as snow fell hard throughout the region.

After a relatively dry day, the flakes starting falling in the early evening, and got heavier as the night went on.

So heavy, in fact, that many people on the roads were seemingly caught off-guard by the sudden onslaught of snow.

And while DriveBC advised those who weren’t “fully prepared” for winter driving conditions to avoid any unnecessary travel in the region, there were still a number of incidents involving stuck cars, buses, and in at least one case, a snowplow itself.

Conditions deteriorated so much that the Lions Gate Bridge was eventually closed down, due to the snow and slick conditions.

Needless to say, it made for a long night for anyone trying to go anywhere.

This was the Lions Gate Bridge last night. We appreciate your patience while it was temporarily shut down due to poor road conditions.

Colder temperatures this morning means a dicey commute. If you have to go out, ensure you’re prepared. pic.twitter.com/tPTtJ8Kr70

Nanaimo Street in East #vancouver is a zoo. There are cars sideways and stalled all down the hill. #snomageddon 2020 has arrived! pic.twitter.com/q6heS3weBe

#BCHwy1 EB in the #SurreyBC lanes: Traffic is stopped as people are out of their cars trying to push them up the hill. Expect heavy delays pic.twitter.com/JF3TIWAMUj

I know everyone else in the country can handle this better than us here in #Vancouver – but that is seriously one big dump, and it isn’t stopping yet. Yikes. #snowmageddon2020 #vancouversnow https://t.co/g5NIHPW6P3

And while the storm itself may have tapered off somewhat, we’re not in the clear just yet. According to Environment Canada, although a high of -4°C and sunshine is predicted for Monday, it will feel as cold as -13°C with the wind chill.

So bundle up, stay safe, and drive carefully (if you have to drive at all).