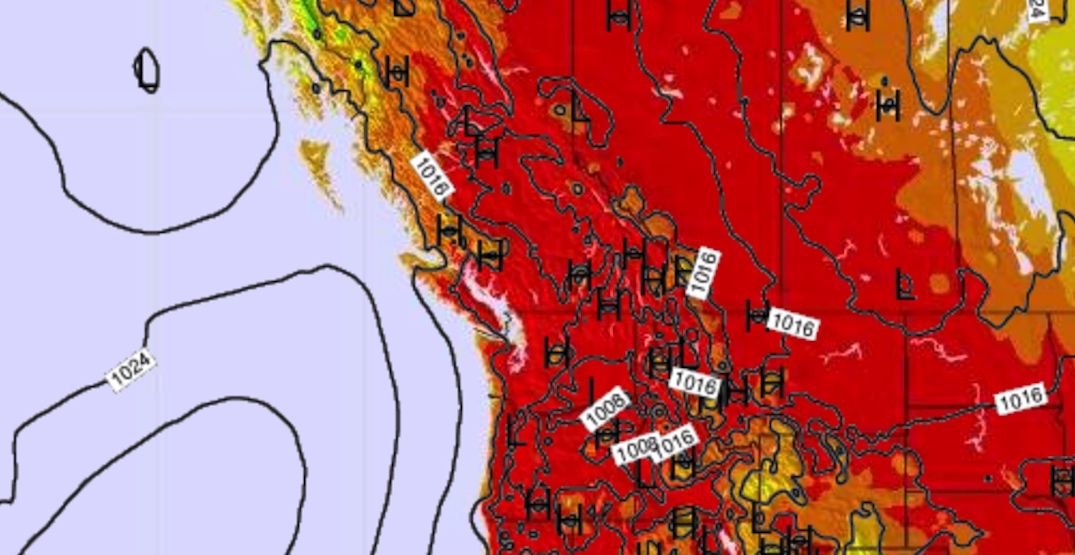 Surface temperature forecast in Western Canada and the US Pacific Northwest at 5 pm on July 31, 2021. (Weather Forecast)

A special weather statement has been issued by Environment Canada for a heat wave in Metro Vancouver over the latter half of this week.

The federal meteorological agency’s bulletin at 5:26 pm today states a strengthening ridge of high pressure will bring rising temperatures across the South Coast later this week.

“The time frame with the hottest weather will be from Thursday to Saturday. The highest temperatures are expected to be in the Fraser Valley, Sea to Sky region, and inland Vancouver Island,” reads the bulletin.

Within Metro Vancouver, daytime high temperatures later this week will rise to 3°C to 5°C higher compared to today and Tuesday — reaching 26°C on Thursday, 27°C on Friday, and 25°C on Saturday for the weather station near water at Vancouver International Airport. For areas that are further inland, away from water (such as Burnaby, Coquitlam, Port Coquitlam, eastern Surrey, and Langley), temperatures will reach the low 30s.

Overnight lows will also rise into the mid to high teens.

Following the historic deadly heat wave earlier this summer, the public is urged to take precautions by staying cool and hydrated, and be extra vigilant for symptoms of heat illness, which include swelling, rash, nausea, vomiting, dizziness, tiredness, muscle cramps, heavy sweating, and cold, pale skin.

A total of 808 deaths were reported in BC between June 25 and July 1, 2021, with the vast majority attributed to heat-related causes. For context, the number of deaths reported in the same period in the province last year was 232. During this period, temperatures consecutively broke all-time records, reaching as high as the low 40s.