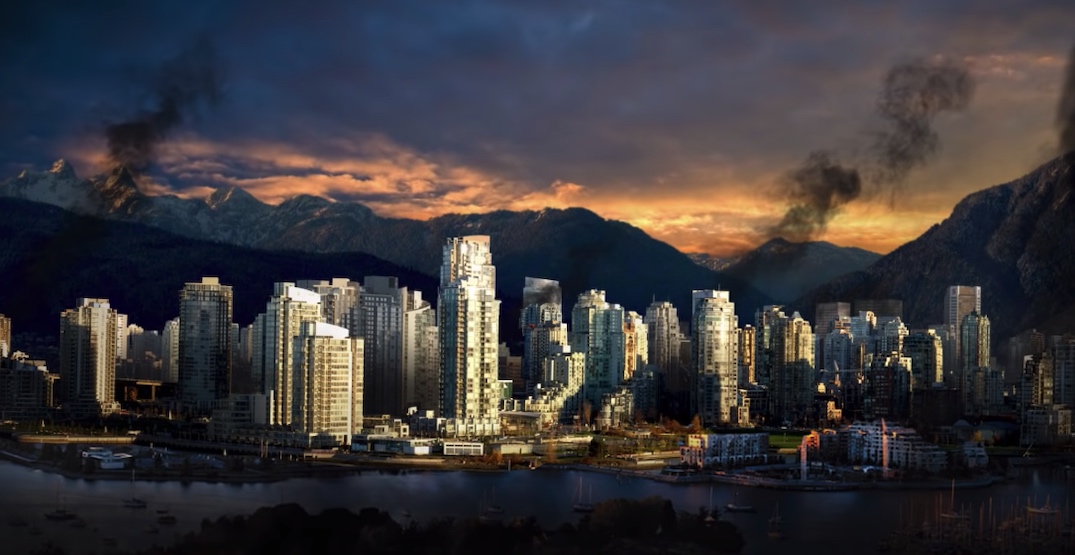 Depiction of fire in downtown Vancouver after a major earthquake. (City of Vancouver)

Fire damage alone during a major earthquake in Metro Vancouver — not including the structural damage and liquefaction from the powerful seismic waves — could result in up to over $10 billion in property damage.

The Institute of Catastrophic Loss Reduction (ICLR), an independent, not-for-profit entity based in Toronto and Western University in London, Ontario, has released a new study that assesses five scenarios after a major earthquake, and offers suggestions to reduce fire risk.

The study is the foundation for the organization’s upcoming advocacy campaign that will press municipal governments in the region to enact major changes to reduce the impact of fire from a seismic event. ICLR was established by Canada’s property and casualty insurers.

Researchers analyzed the impact of a magnitude 9.0 earthquake with an epicentre in the Cascadia Subduction Zone west of Vancouver Island, commonly referred as the “Big One.”

The magnitude 9.0 Cascadia event would have the least fire damage, with just 16 median ignitions, less than one major fire, and $160 million in damage.

Both earthquake scenarios in the Strait of Georgia off UBC and Richmond/Delta have comparable fire damage of about 100 ignitions, 30 large fires, and over $7 billion in damage.

The scenario with the most damage is the New Westminster epicentre, which could create 216 ignitions, 47 large fires, and $10.7 billion in damage.

“This loss would be almost entirely insured and would have a very significant impact on the Canadian insurance industry,” reads the report.

“Fire losses would come on top of shaking and other losses, which would be insured to a lesser extent. A leading global reinsurer has stated that losses of this magnitude would likely result in failure of some insurers, would entail secondary and contingent losses, and could conceivably lead to financial contagion.” 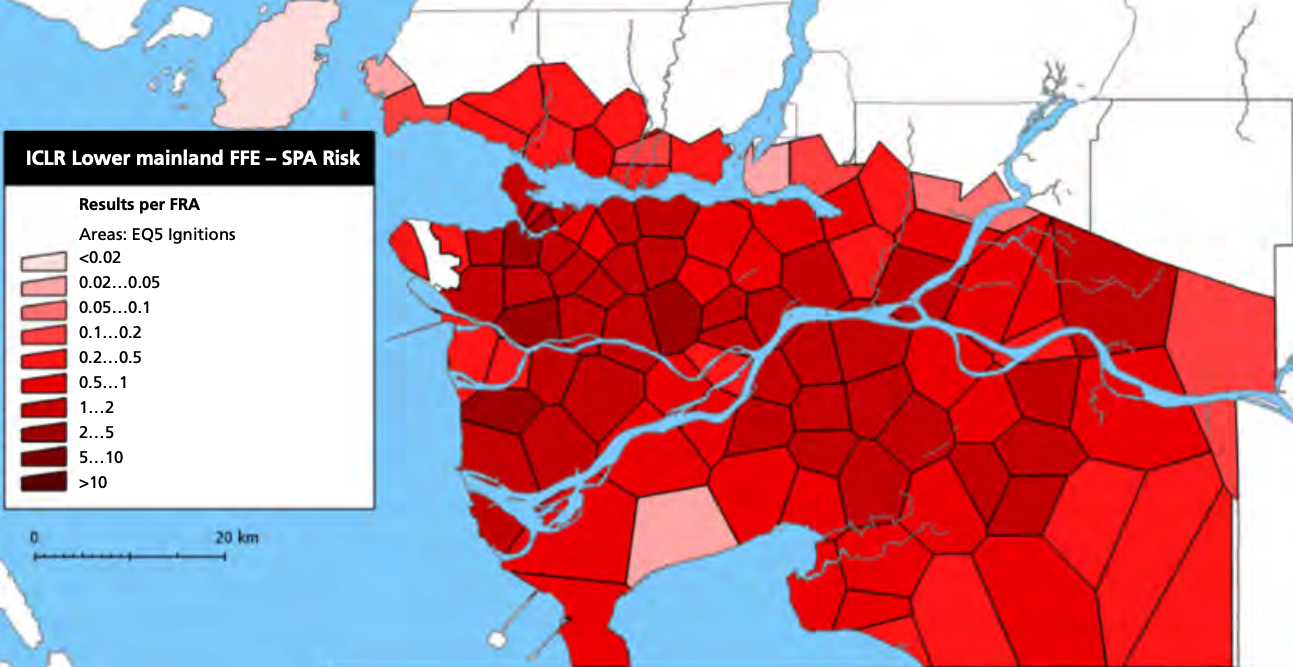 Distribution of mean ignitions per fire response area for the scenario of a magnitude 6.5 earthquake with an epicentre in New Westminster. (Institute of Catastrophic Loss Reduction)

Their calculations are based on factors such as fire department response, water system damage, weather, and the growth and ultimate final burnt area of fires. However, their work does not account for the impact of fires from energy industry infrastructure, such as fires at the Burnaby oil terminal and tanks, and the LNG terminal in South Richmond.

But natural gas distribution-related ignitions, which typically account for about 25% of the total number of fires after earthquakes, are factored in. The region has a comprehensive network of buried natural gas lines operated by FortisBC.

The report states there are “excellent programs” implemented by the provincial government, City of Vancouver, and regional agencies to reduce risk, including the already established advanced equipment and training for fire defence. 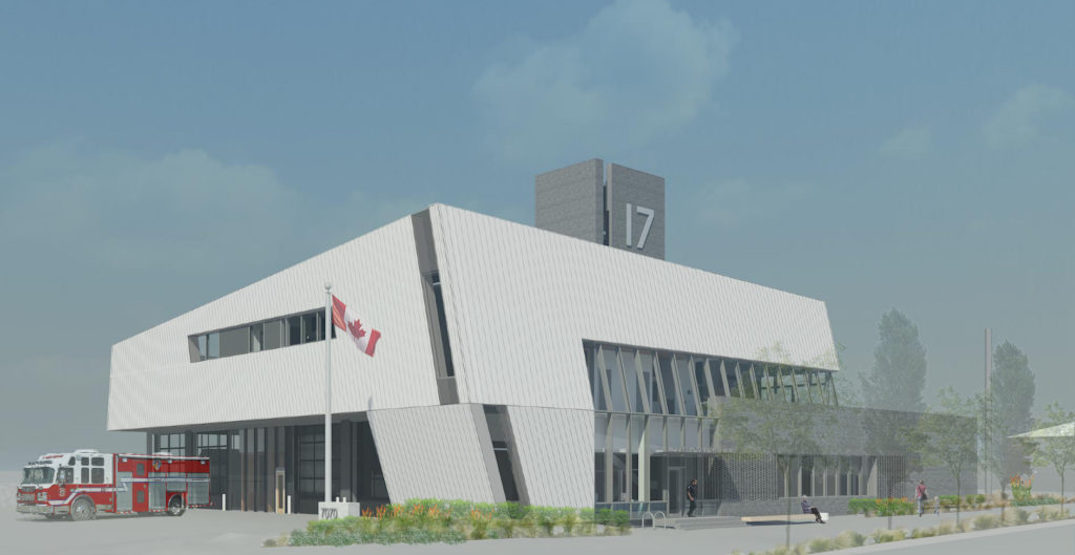 There are a total of 98 fire halls across Metro Vancouver that contain a total of about 200 fire trucks. This includes 20 fire halls serving the region’s highest density jurisdiction, Vancouver, where there are 37 fire trucks and 10 backup reserve fire trucks.

Fire departments across the region have mutual aid agreements with neighbouring departments, and this was recently made evident to the public when Vancouver Fire Rescue Services (VFRS) deployed a fireboat and other resources to assist with the New Westminster Pier Park fire. VFRS has three fireboats.

But after an earthquake, the capability for assistance could be limited as the region’s road infrastructure has been deemed vulnerable, especially the bridge crossings. 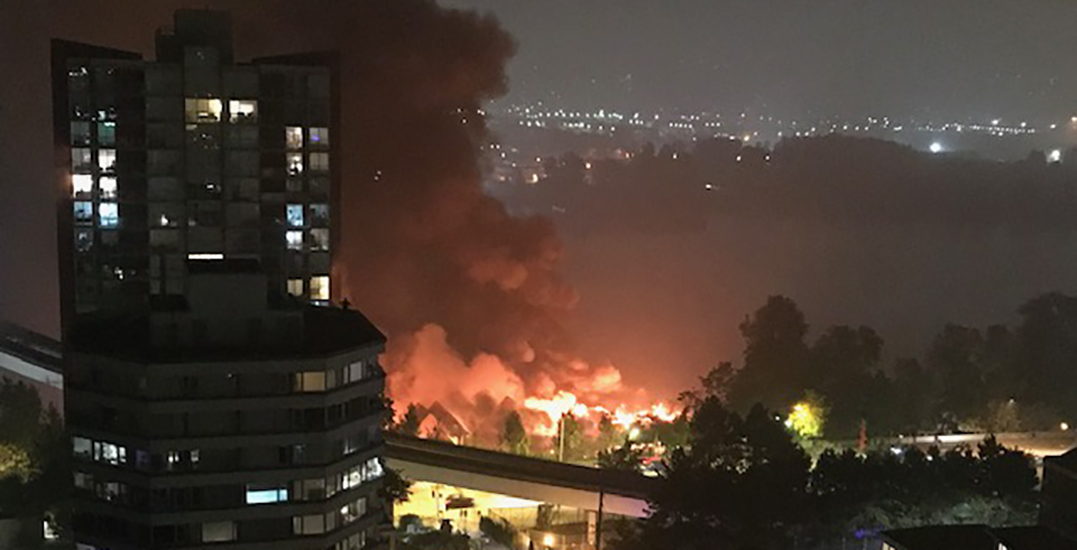 Vancouver’s building code already has a high degree of fire protection requirements; all new construction, including single-family homes, are required to have fire sprinklers. But researchers warn these sprinklers are likely to fail after a major earthquake, given that the water supply from underground water mains will likely be damaged.

The study recommends the implementation of the added building code requirement of a secondary on-site water supply within high-rise towers, following the building code of California. Retrofits to existing tower buildings with the addition of 60,000 litre water tanks would take up the equivalent of two vehicle parking stalls in the underground levels, and the cost would be significantly less than 1% of the value of the building.

New standards should also be developed for natural gas meters; all gas meters should be replaced with meters that have an automatic gas shutoff device.

Following the devastating fires of the 1995 Kobe earthquake, the Government of Japan required all gas meters be replaced with meters with such a device. All meters in Japan were replaced within a few years, and these meters have functioned well with very few false triggers. When there is a false trigger, the device can be easily reset by the natural gas customer.