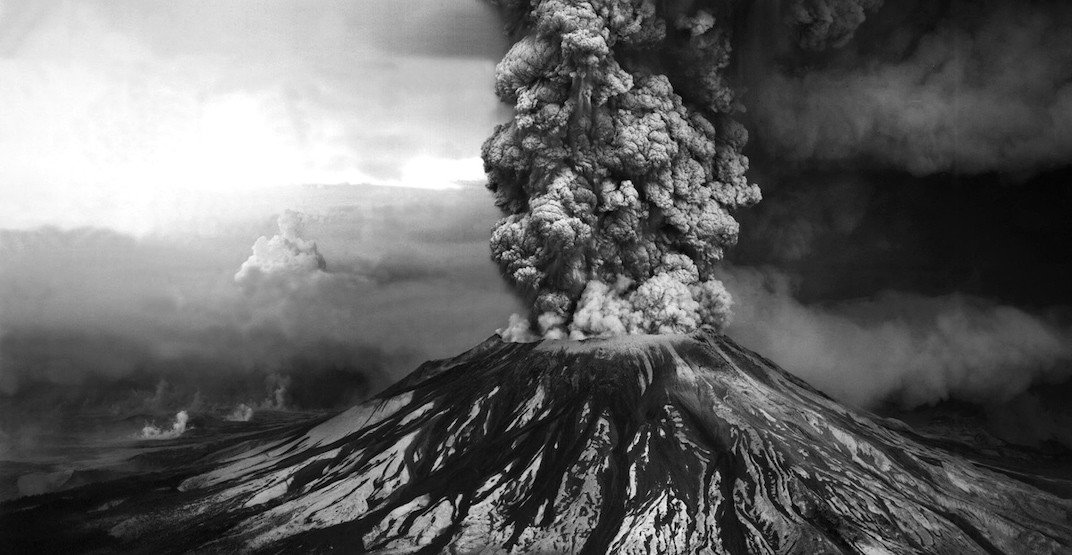 “I thought the Russians bombed Seattle.”

Paula Diakiw was lying in bed in her Vancouver West Side house at 8:32 am on Sunday, May 18, 1980 when glass in big frames in her bedroom began to slide open. A deafening sound could also be heard.

She recalls immediately jumping out of bed and looking out the window to see if she could see any smoke from what sounded like a massive explosion coming from the south.

It was a clear day, and she could see Vancouver International Airport.

“I picked up my yellow princess telephone and called CKLG to see if they knew what had happened, and the panicked man said that he had received a number of calls and he had no idea what had happened,” Diakiw told Daily Hive.

“He said to stay tuned to the radio.”

In her mind, she was wondering if this was the work of the Russians. Cold War tensions were a real fear at the time, escalating throughout the 1970s with the Soviet Union developing longer-range ballistic missiles capable of carrying nuclear warheads — and the West advancing their own weapons as well, in response.

“I paced the house and thought about what could’ve caused that much noise and wondered if perhaps the Russians had bombed the nuclear plant at Washington State or perhaps the naval base there. ”

In his home in the Hastings-Sunrise area, Austin Pinkerton was eating breakfast in the kitchen when the house vibrated and a loud roaring noise overcame the music being played on the radio.

Liz Scrimes was at a cafe on Oak Street near West 16th Avenue when the vibrations and noise happened. She was working a shift when a plate glass window shook, and she remembers initially thinking it was hit by an unhappy customer.

At 8:32 am, over 400 kms south of Metro Vancouver, Mount St. Helens in Washington State was the epicentre of a magnitude 5.1 earthquake, and within seconds the volcano erupted and triggered the largest landslide in recorded history. 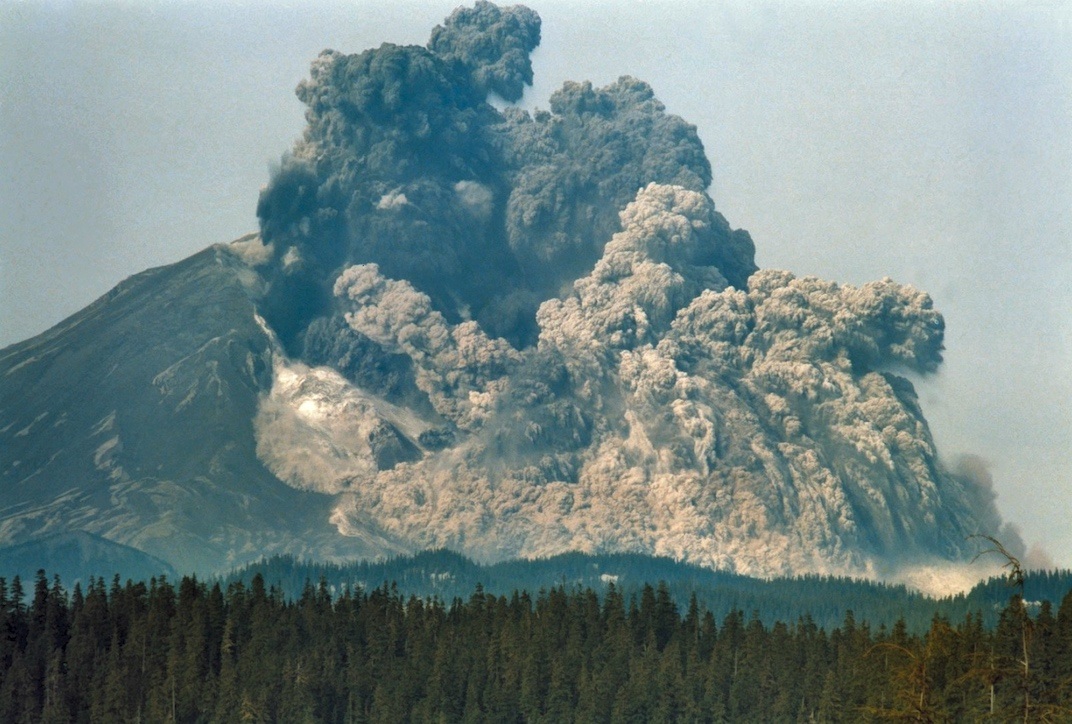 The moment Mount St. Helens erupted, and the resulting massive landslide, in 1980. (USGS)

In a matter of seconds, the mountain had lost about 1,300 ft of its height, with one cubic km of rock volume speeding away at 249 km/hr.

Super-heated pyroclastic flows traveling at rapid speeds destroyed 600 sq. km. of forest area immediately around the mountain, while lahars — volcanic mudslides with the consistency of wet concrete — from the sudden melt of entire glaciers caused flooding as far as 80 kms away.

The energy produced by the eruption was equivalent to 26 megatons of TNT — over 1,700 times larger than what was dropped in Hiroshima.

At least 57 people were directly killed by the eruption, and billions of dollars of property damage was recorded.

The eruption also produced a column of ash and super-heated gases reaching an altitude of 80,000 ft. 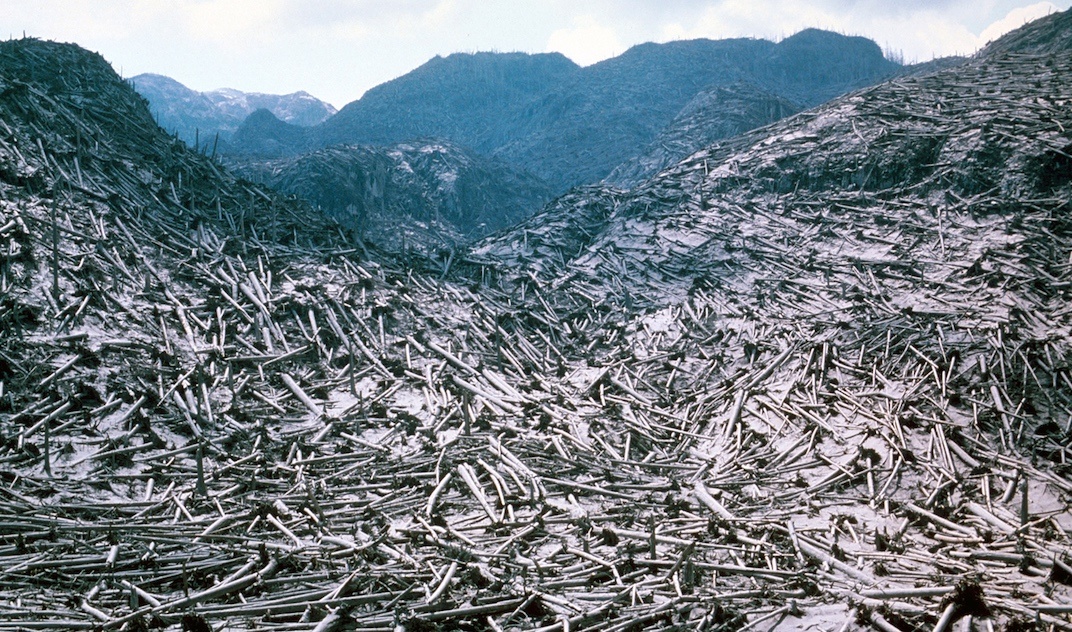 Forests destroyed by the Mount St. Helens eruption in 1980. (USGS)

Within hours, blue and sunny skies in Vancouver turned into a deep grey overcast. And there was even some ash fall.

“I sort of remember a lot of ash in days afterward, very similar to the smoke during wildfire season,” said Scrimes.

Diakiw added: “The majority of the ash travelled east of Vancouver, but we got a dusting for what seemed like 6 months… it affected fruit crops, and the Kootenays and Calgary, as I recall. The Albertans were so perturbed, as if BC had sent it to them.”

Over 39 years later after these events, there is now an effort to truly understand the eruption impact of Mount St. Helens in Canada.

Britta Jenson, a professor in the Department of Earth and Atmospheric Sciences at the University of Alberta, is leading a research team surveying Canadians who were around at the time. She says they were “quite affected, mostly emotionally, by this eruption.”

This is the first comprehensive attempt to capture human experiences of this event in Canada, which will hopefully lead to a better understanding of volcanic activity and improve planning for future disaster preparedness. 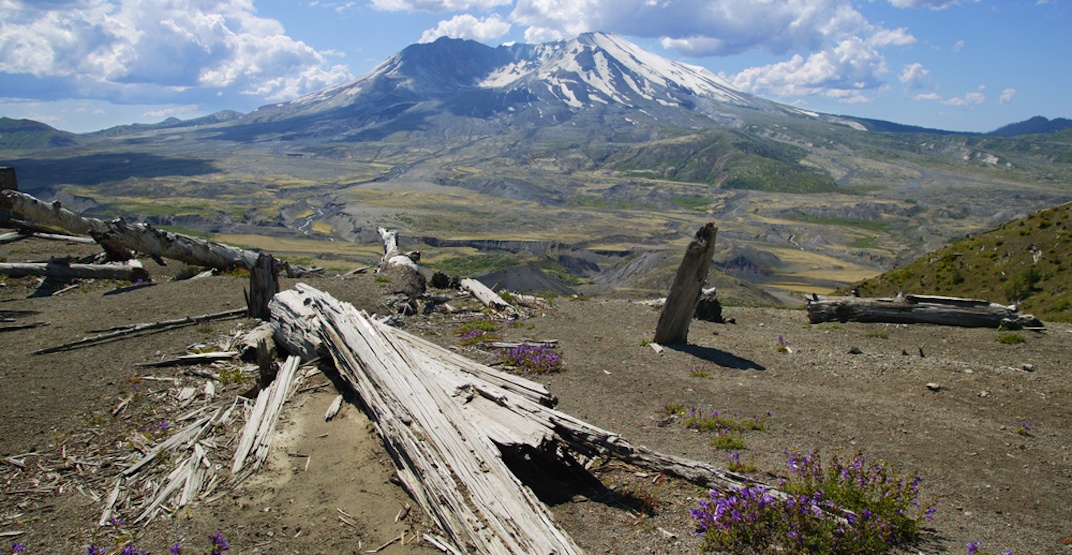 “It was obvious that it really affected a lot of people, the idea that a volcano hundreds of kilometres away could impact Canada, their memories were quite vivid and more than a few reported still having a vial of ash,” Jenson told Daily Hive.

Based on the responses she has received to date, people in both Vancouver and Vancouver Island reported a sonic boom.

“It must have been quite the experience – hearing this boom, but more interestingly, feeling it, and having no idea what it was. In fact, more people reported feeling the boom than hearing it,” she said.

Jenson adds that the ash fall was heaviest from southeastern BC, in the Creston-Cranbrook region, through to Fernie, Crownest, Blairmore, and into Lethbridge.

Although it was likely not more than one mm thick, the ash was still enough to push people into wearing masks, especially for those with asthma issues. Orchards in the Creston area were particularly impacted.

But outside of these regions, she says, it was only a light dusting, but widespread into Metro Vancouver, Fraser Valley, Okanagan, and even Edmonton and southern Manitoba.

“When we first heard that people were reporting ash in the Lower Mainland and onto Vancouver Island, we thought they were mis-remembering as the main plume was to the northeast and completely bypassed the region by hundreds of kilometres,” said Jenson.

“However, the survey results were surprisingly consistent — people reported a really light dusting that started a few days after the eruption.”

Ash fall began to hit southeast BC on the same day of the eruption, and Vancouver did not see any ash until May 20 or 21 due to varying wind directions in the stratosphere.

Following the eruption and its devastation, the United States poured in immense funding and resources towards studying and monitoring its volcanoes, but the same cannot be said for Canada’s program, with all known volcanoes located on the West Coast. 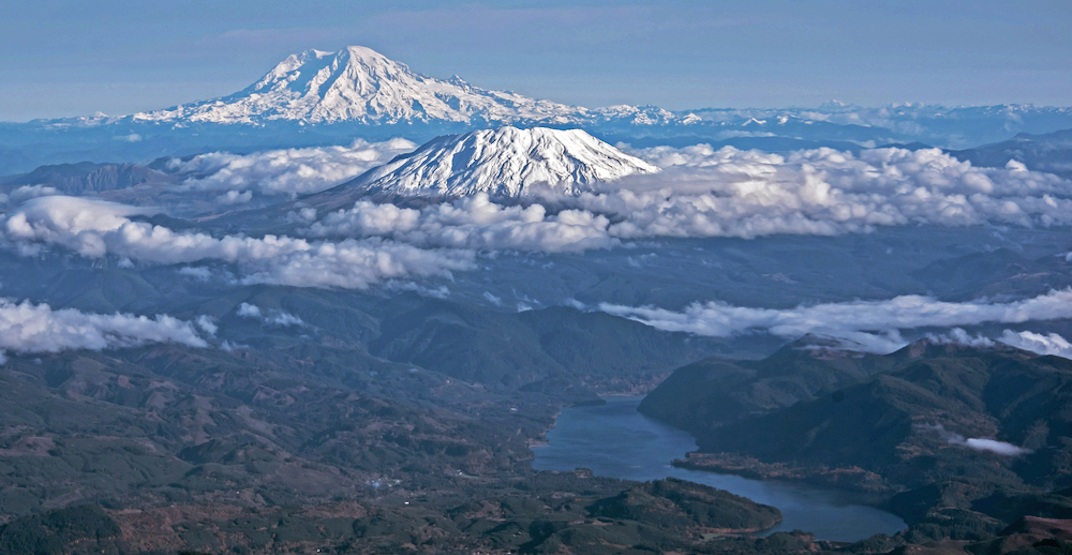 “On the Canadian side, we have at least 50 volcanoes that have been mapped. Of those, because accessibility is such a problem, we know very little about our Canadian volcanoes,” he said.

“By and large, they have been far less active than in the United States, and that just means there is less money spent to study those volcanoes. We haven’t had our St. Helens in recorded history.”

Instead, researchers are focusing on satellite monitoring and varying sensor systems, but this option is still expensive.

The greatest volcanic threat to Metro Vancouver is Mount Baker, which looms just 110 kms from the City of Vancouver and 23 kms from Abbotsford — just across the US-Canada border, and east of Bellingham.

But extensive studies of this well-researched and monitored mountain have determined that an eruption of Mount Baker for the foreseeable future will not carry the same potency as Mount St. Helens’ big event. 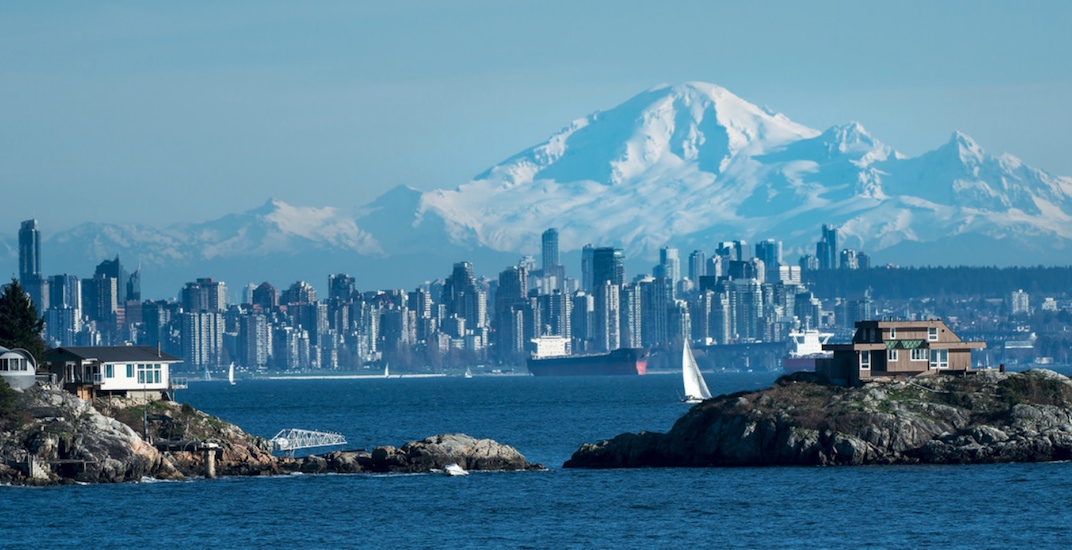 Mount Baker photographed using a telephoto lens from a BC Ferries vessel in the Strait of Georgia. (Mark Donovan / Flickr)

Pyroclastic flows are unlikely. Instead, Williams-Jones says the biggest threat from Mount Baker is the production of lahars.

With an estimated 1.8 million cubic km of glacial ice — more than all of the other volcanoes on the Cascade Volcanic Arc, except Mount Rainier, combined — an eruption of Mount Baker could lead to lahars and flooding reaching the Fraser Valley and parts of eastern Metro Vancouver.

“Mount Baker’s last eruption was in the late 1800s. Whether it happens again in the next century, it’s really hard to say,” said Williams-Jones.

And there are, of course, also volcanic threats along the Sea-to-Sky Corridor north of the Lower Mainland.

Mount Meager, located northwest of Pemberton, is considered active. Its last eruption about 2,400 years ago was similar to the Mount St. Helens event, spilling out 0.8 cubic kms of rock and scattering ash within an area that stretches as far as Alberta.

Located near Squamish, Mount Garibaldi is a part of the Mount Meager volcanic system, and it was last active at the end of glaciation about 10,000 years ago.

If you were around in Canada during the 1980 eruption of Mount St. Helens, the University of Alberta is looking for survey responses of how Canadians were impacted. To complete the survey, click here.