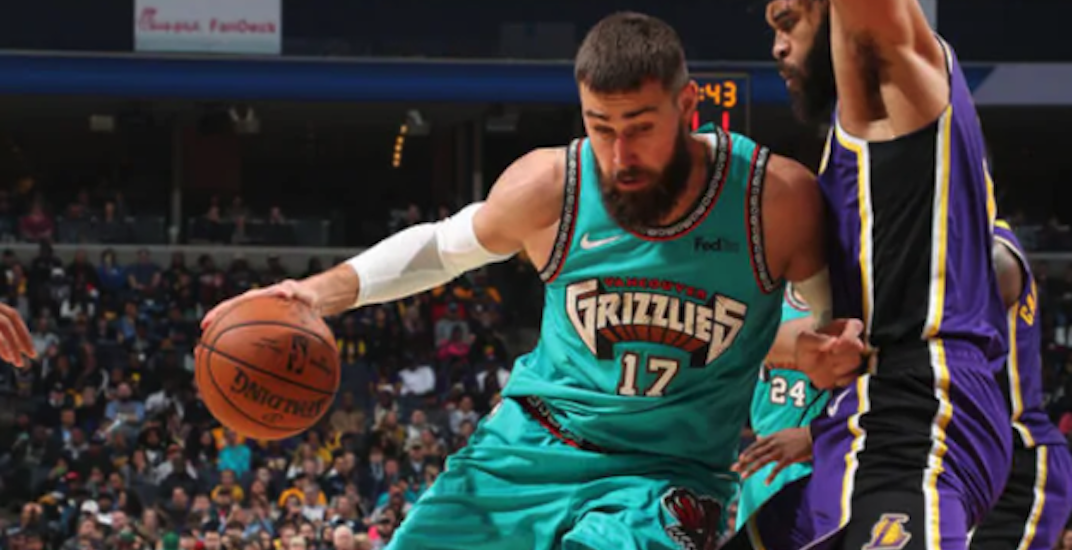 The Vancouver Grizzlies made a brief return to the NBA this weekend.

The 1995-era look was complete with “Vancouver” listed on the original Grizz logo, in honour of the franchise’s 25th anniversary season. The Grizzlies’ home court at the FedExForum in Memphis was given a retro makeover, while players also rocked throwback warmup attire.

Grizzlies did not win the basketball game but they killed with this Vancouver retro look pic.twitter.com/WILWjgkAOr

The evening in Memphis included a performance from Montell Jordan, who rocked a teal Jaren Jackson Jr. jersey while singing his 90s hit “This Is How We Do It.”

The team was wearing Vancouver Grizzlies jerseys, so of course they lost, though by a respectable score (109-108) to LeBron James’ Lakers.

For the record, in the 23 all-time games the Vancouver Grizzlies played against the Lakers, they had one win and 22 losses. Shareef Abdur-Rahim scored 28 points on February 23, 1999 in Vancouver’s lone defeat of Shaquille O’Neal and Kobe Bryant.

The uniforms were extra meaningful for Vancouver native Brandon Clarke, who is in his rookies season with Memphis.

The Grizzlies began using black as the primary colour of their road jerseys in 2000, while Memphis changed the team colours entirely in 2004. And for good reason: they weren’t popular at the time.

He’s got a point.

The reaction online was mixed between appreciation for the undeniable beauty of the 90s era uniforms and outrage that Memphis would dare wear Vancouver’s jersey.

Those Vancouver Grizzlies jerseys were fire. I need the Ja Morent jersey ASAP.

The Vancouver Grizzlies jerseys look amazing. I love it. @memgrizz

my goodness the Vancouver Grizzlies unis are SO CLEAN pic.twitter.com/jGv7YFU5GQ

As a Vancouver Grizzlies fan, seeing this picture breaks my heart pic.twitter.com/HeUjZdiZfC

The Vancouver Grizzlies designs are meant for Vancouver only. It makes zero sense for Memphis to be wearing them #rant

Seeing those 🔥 uniforms for the first time in a long time confirms my thoughts over the past few years. Grizzlies belong back in Vancouver #JustMyOpinion

Do y'all agree with the Grizzlies wearing Vancouver throwback jerseys? Am I the only one a bit salty about it or am I just being sorry.

MOVE THE GRIZZLIES BACK TO VANCOUVER YOU COWARDS @NBA @memgrizz

the blasphemy of @memgrizz in OUR vancouver grizz throwback uni’s is beyond pure disrespect🤦🏽‍♂️🤷🏽‍♂️ and the court too.. 👀 @Lakers HAD to let you hold that L despite barely showin’ up. I forecast many L’s if y’all continue to sin and rock those jerseys 😆 #grizzlies

Gonna tell my kids the Vancouver Grizzlies came back in 2019 #NBATwitter pic.twitter.com/3yhXdMUtCs

No word yet if they’ll bring the Naismith Cup out of retirement for the Raptors game.