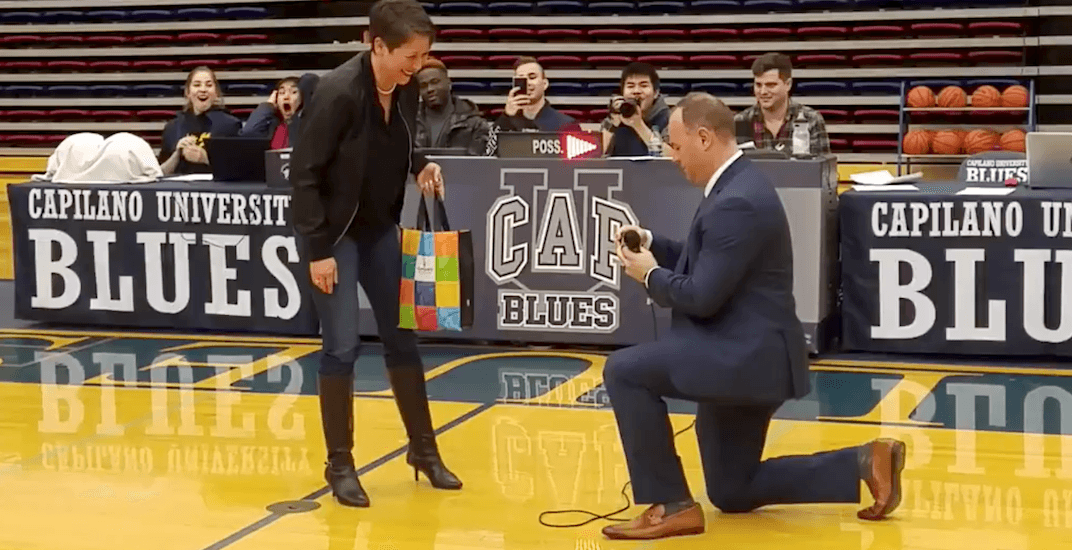 Love was in the air at Capilano University in North Vancouver on Friday.

Prior to tip off against Vancouver Island University, Capilano Blues head coach Cassidy Kannemeyer drew up the perfect play.

He called his own number.

After the national anthem was sung, ‘Coach Cass’ grabbed the microphone.

With his girlfriend Melanie Mark in attendance – she happens to be the BC Minister of Advanced Education, Skills and Training – this was the perfect moment.

Called up to accept a gift from the University – not an unusual request for the first First Nations woman to serve in the Legislative Assembly of British Columbia – Kannemeyer had another gift for her.

This one required a skill-testing question to receive.

“Will you marry me Melanie Mark?”

Making her hands in the shape of a heart, she said yes and the couple sealed the deal with a kiss.

As Journey’s 1981 hit song “Don’t Stop Believin'” blared through the arena, this was truly the most romantic thing to ever happen at the 1,700-seat Sportsplex.

“I wanted to do a public proposal, and I had a dream of doing it at a basketball game,” Kannemeyer told Daily Hive.

Kannemeyer’s players knew about the proposal idea as well, even helping to put the finishing touches on it.

“The guys worked really hard to make sure the process went really smooth,” the tactically-sound Kannemeyer said of his players.

With this type of top secret plan, the head coach had his people on a need to know basis. Friends and family – including Mark’s two daughters – witnessed the storybook proposal.

“I had a lot of friends in the crowd, but they didn’t know (about the plan). It was a surprise to a lot of people, as well as Mel. It was an awesome event that way. A lot of people thought that was pretty cool. It was great to share with all the fans.”

All that was missing from the evening was a win for the home team. Unfortunately that didn’t happen against the No. 2 ranked team in the CCAA, though the pre-game festivities may have motivated the Blues to a 41-40 lead at halftime.

With a team loaded with local talent – 12 of 14 players played their high school ball in Greater Vancouver – Capilano has a 5-5 record through the first 10 games of this season. They finished second in the province last year, picking up a silver medal.