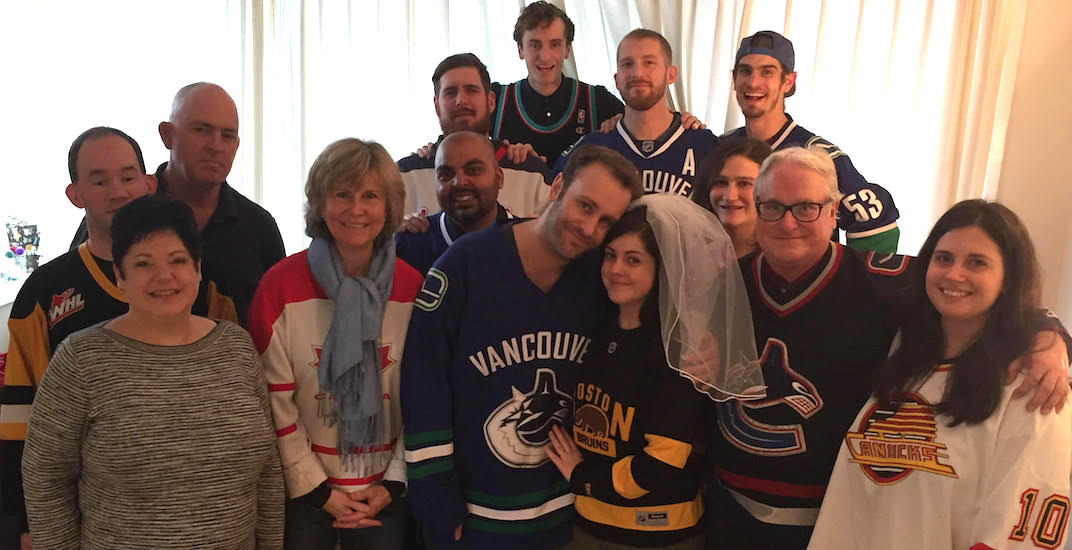 It’s the most unlikely romance since Romeo and Juliet.

Despite a large following on Twitter (he’s up to 4,885 followers at last check), Vancouver native Andy Cole didn’t realize the true power of social media until last year.

That’s when he met Courtney on Twitter. She would become the love of his life.

Just one problem though: she’s a Boston Bruins fan.

If you lived in Vancouver in 2011, I don’t have to explain why this could be an issue for Andy, a diehard Canucks supporter. Ever since the Stanley Cup Final, Canucks and Bruins fans get along about as well as the Montagues and the Capulets.

“I followed him because he put music to videos and I thought that was kind of funny,” Courtney said in a phone interview the couple gave with Daily Hive. “And I thought he was very handsome.”

Andy didn’t initially respond to his new follower, who went by the handle @stupidsexybruin.

“It took me about a year to get back to her, which she’ll never let me forget,” said Andy. “She always bugs me about that.

“She tried to contact me a couple of different ways, through Instagram and through Twitter, and because I’m an idiot and oblivious to women I just didn’t really touch base with her. I never responded to her much during that one-year period until finally I guess I started looking at some of her Instagram pictures and was like ‘hey this girl’s kind of cute – she’s a Bruins fan so she’s not perfect – but she’s attractive.’”

Once Andy and Courtney got talking, sparks flew despite the distance that separated them. Andy now lives in Kamloops, while Courtney is from Washington state.

Eventually Andy proposed, and on Sunday, the pair got married in a unique way.

Getting married today. Second wedding. My first was to Jesus Martinez in Kindergarten as Q & U. Had the whole white dress and get up the first time around. So decided to go casual for my second round. Wish me luck.

Courtney, who might be the most easy-going bride of all-time, didn’t want a big flashy wedding. Instead of an expensive dress, she opted for a black and gold Bruins jersey and jeans. Andy countered with a blue and green Canucks jersey.

They invited friends and family to show up in jerseys too.

“I think everybody liked it because you didn’t have to wear a tux or a dress, it was just very casual,” Courtney said. “That’s just how we wanted it. I know I didn’t want to get in a big old dress.”

“People loved it,” Andy added. “Even the wedding commissioner thought that was just hilarious.

“This is the exact opposite of every wedding you’ve ever been to.”

After getting married in Andy’s Kamloops apartment they, along with 15 wedding guests, headed off to The Dirty Jersey Sports Bar & Grill for wing night.

“It’s the most divey bar, but it’s got the best wings,” Courtney says.

From there, the wedding moved to – where else – a hockey game.

The Tri-City Americans, Courtney’s hometown team, were in town to play the Kamloops Blazers. Unfortunately for Andy, Courtney got the last laugh once again, with Tri-City winning 4-1. 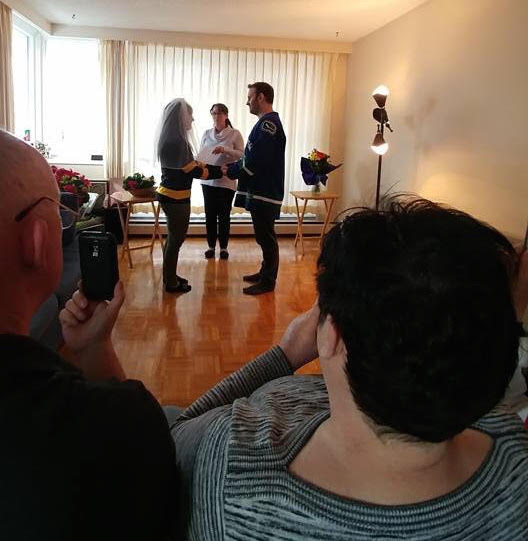 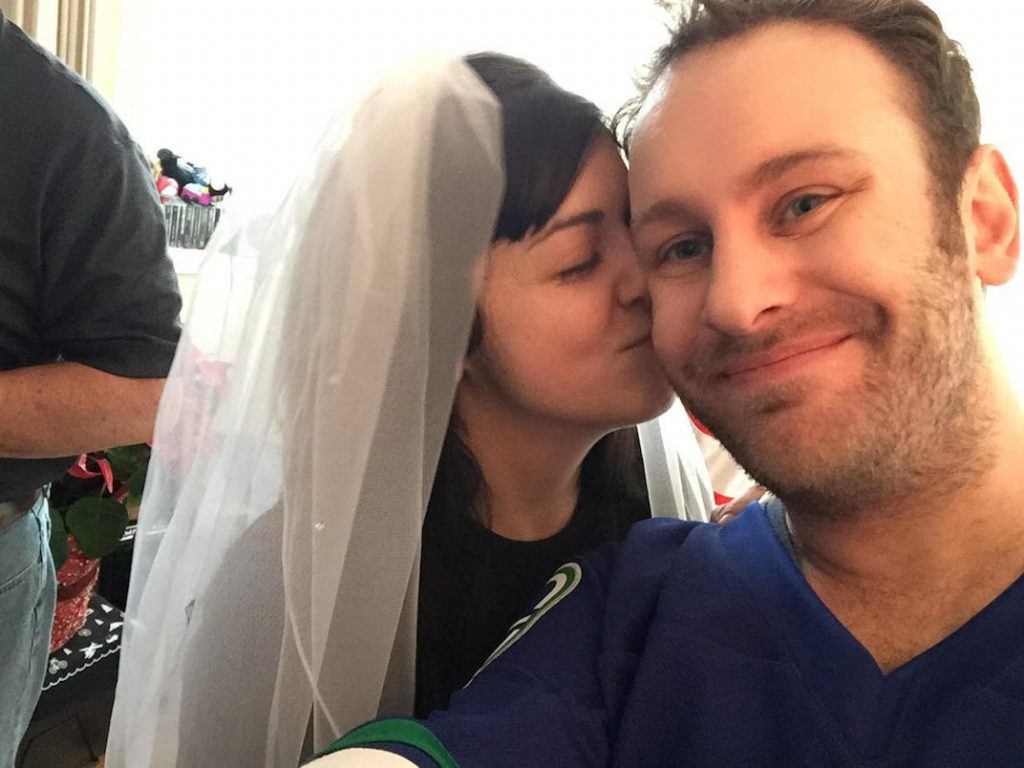 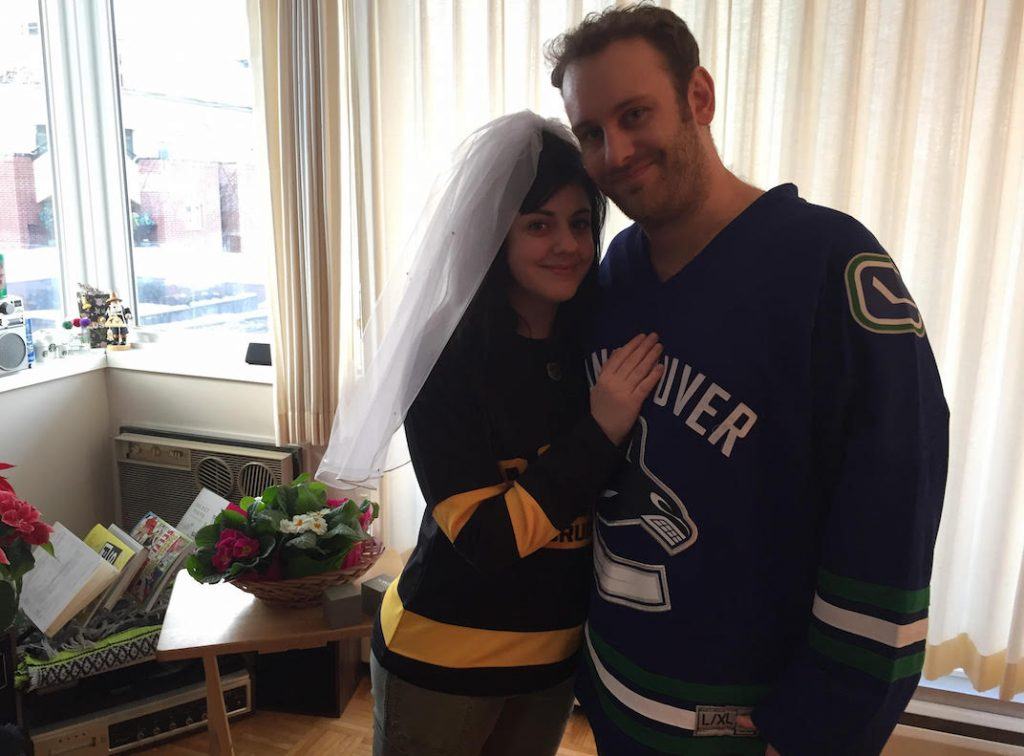 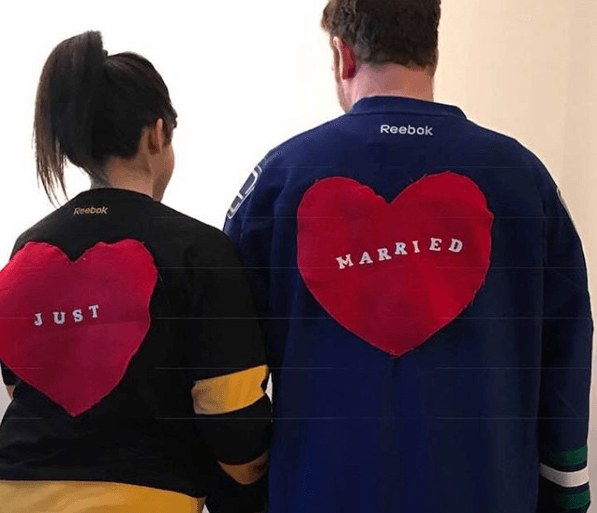