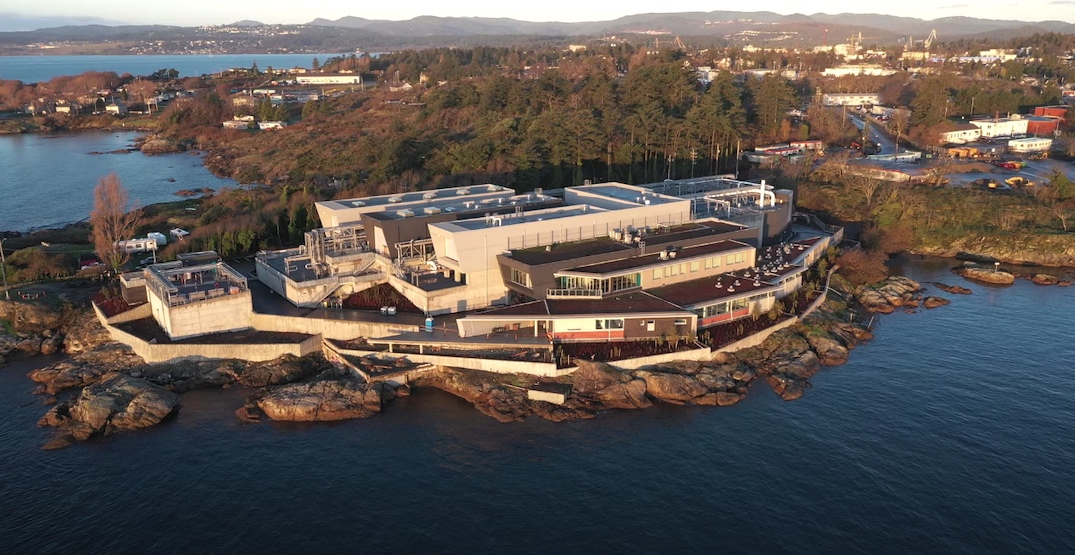 The waters in and around the South Coast of British Columbia and northern Washington State will be cleaner moving forward, now that a $775-million sewage water treatment plant has opened at the southern tip of Vancouver Island.

Prior to the opening of the facility in the middle of November, Victoria and its suburban municipalities released as much as 130 million litres of raw sewage — equivalent to 52 Olympic-sized swimming pools — into Juan de Fuca Strait every single day.

An overhaul of the Capital Regional District’s processing system for wastewater entailed the major investment of building the McLoughlin Point Wastewater Treatment Plant on a 3.5-acre oceanside site in Esquimalt.

There is also a new residual solids treatment facility at the Hartland landfill in Saanich, and 35 kms of piping that carries wastewater between the facilities.

This wastewater treatment plant can treat 108 million litres of wastewater per day — equivalent to 43 Olympic-sized swimming pools — to a tertiary level, which is one of the highest levels of treatment available and exceeds regulatory requirements.

Prior to the construction of the new facilities, the release of 40 billion litres of raw sewage into the strait every month has long been a sticking point in the relations between British Columbia and Washington State, with the untreated waters flushing southwards through the strait and into Puget Sound.

“I was wondering why the water looks so clean in front of my house in Bainbridge here… It is a remarkable achievement,” said Washington State Governor Jay Inslee in a video conference with BC Premier John Horgan celebrating the facility’s first month of operations.

Horgan said: “I believe that this, although a long time coming, is an example of how we are listening to each other and we’re gaining valuable experience and understanding of our profound impact on our shared environment. And if we work together, we can revive our fisheries, we can revive our orcas, and and we can continue to have a strong economy. As a born and raised Victorian, I’ve been contributing to this problem my whole adult life, and I’m happy to say I’m not doing that anymore.”

A new two-km-long outfall pipe was installed at McLoughlin Point that discharges treated effluent at a water depth of 60 metres. 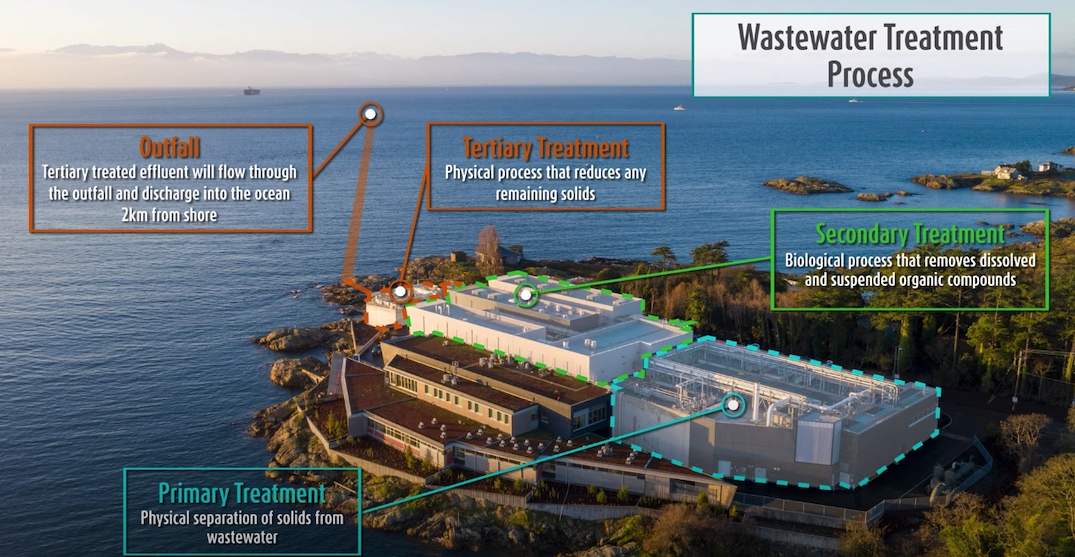 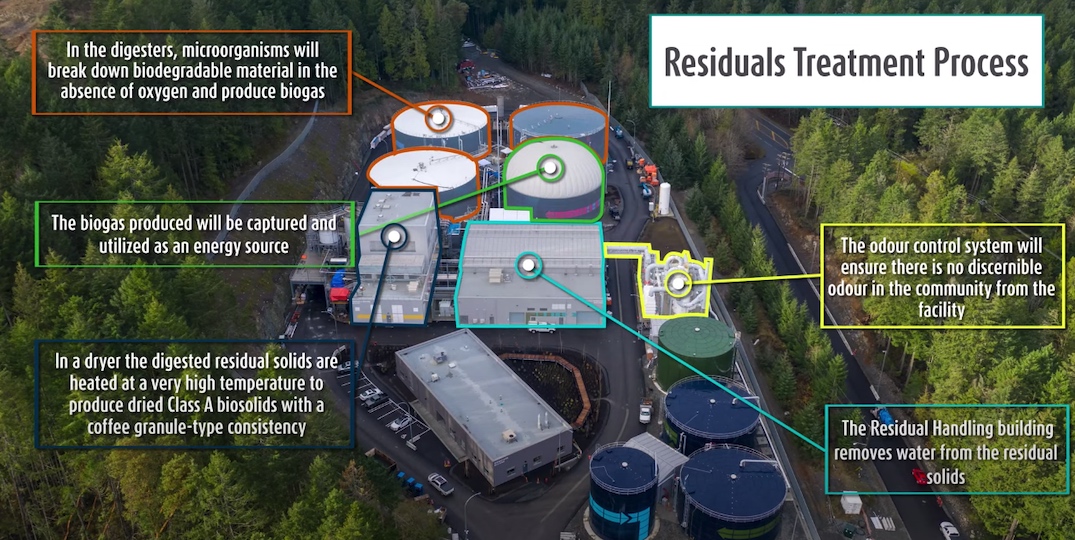 Residual solids will be turned into Class A biosolids that will be transported to the Lower Mainland as an alternative fuel source for a cement factory for five years, relying their dependence on non-renewable fuels to power the facility. A long-term strategy is being developed for the by-product of biosolids.

A one-km-long cross-harbour undersea pipe was also drilled between McLoughlin Point and Ogden Point in Victoria to connect the Clover Point pump station to the new treatment plant. This pump station at Clover Point was originally built in the 1970s to discharge wastewater from the region into the ocean.

For the community where the treatment plant is located, the complex features public amenities such as a viewing plaza, public washrooms, cycle track, and a park amenity above the on-site pump station.

The 75,000-sq-ft treatment facility itself has a green roof, and the 25,000-sq-ft operations and maintenance building is constructed to a LEED Gold green building design standard. Heat recovery from the wastewater will be used to heat buildings on the site. 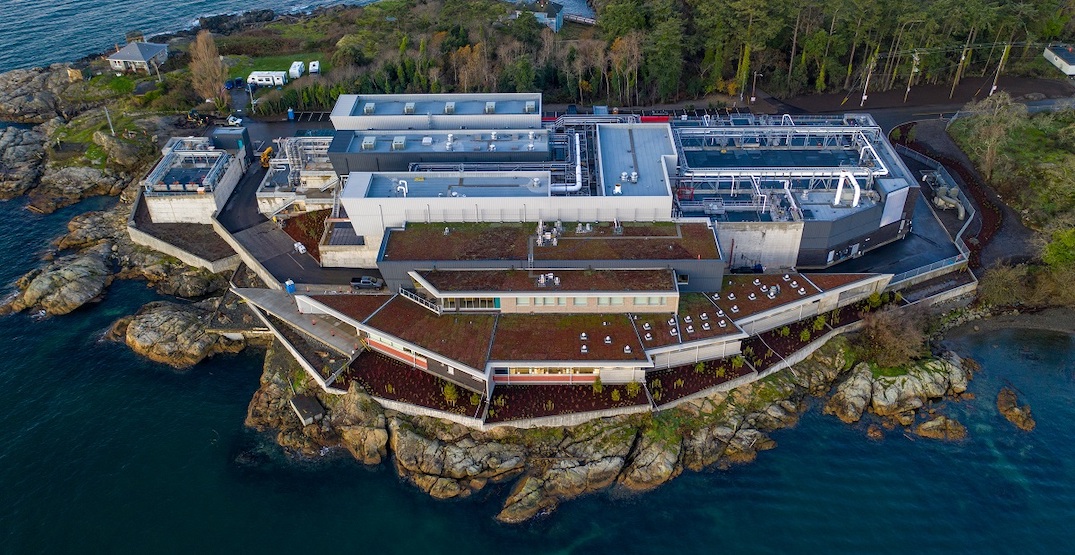 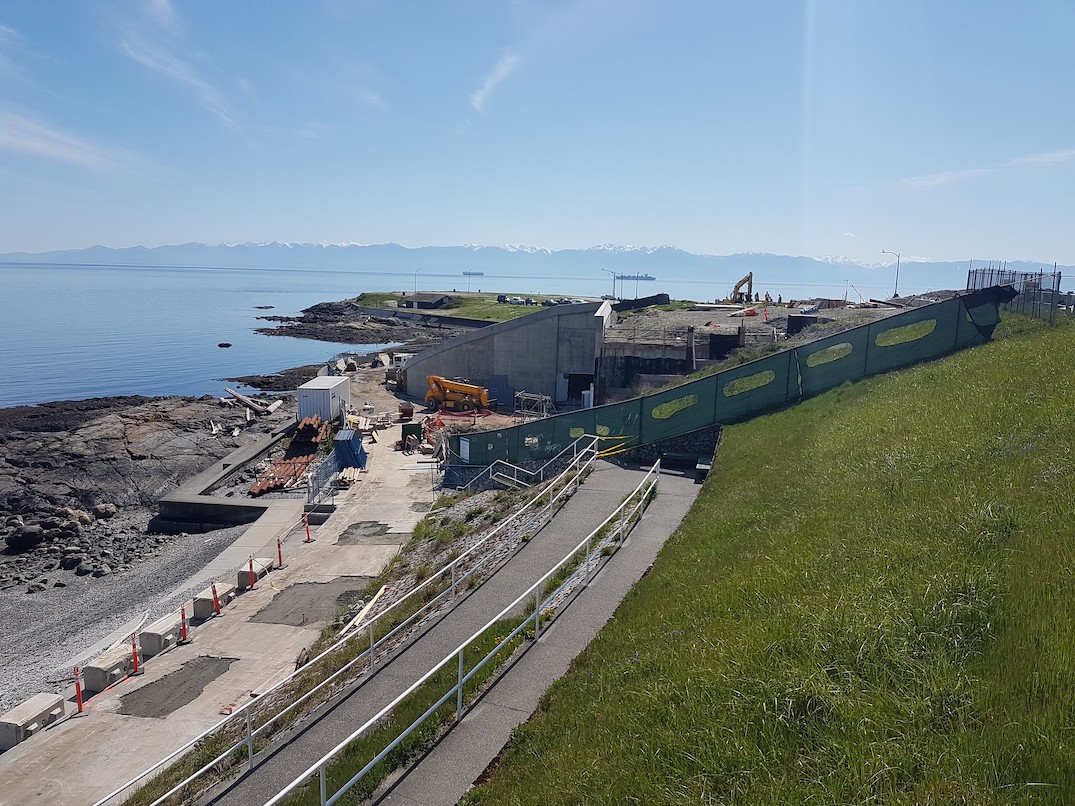 Construction on the McLoughlin Point Wastewater Treatment Plant in Summer 2020. (Government of BC)

The complex is built to post-disaster standards and will remain operational after a major earthquake and tsunami. The site’s perimeter is lined with tsunami walls, given its coastal location.

There was much consternation during the project’s planning process over funding and especially on the treatment facility’s location.

In Metro Vancouver, a new $700-million sewage treatment plant just west of North Shore Auto Mall is scheduled to reach full completion in 2021. It will serve the wastewater treatment needs of the entire North Shore.

There are also plans to provide the existing Iona Wastewater Treatment Plant located northwest of Vancouver International Airport with a $2 billion upgrade.

In 2016, the Tsawwassen First Nation completed a $27-million sewage treatment plant that serves the wastewater treatment needs of the new commercial, residential, and industrial developments on its lands in the area, including Tsawwassen Mills shopping centre.