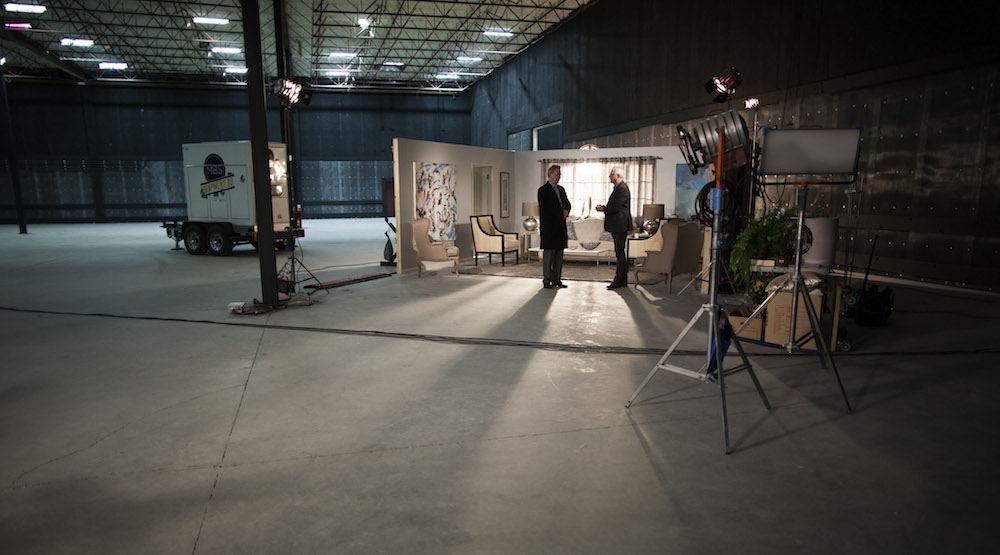 British Columbia’s booming film and television production industry will see a big boost in its production capacity with the opening a massive new film studio in Langley’s Walnut Grove area.

Martini Film Studios is a 150,000-square-foot, state-of-the-art facility with eight stages and an additional 100,000-square-feet of backlot space. The former window manufacturing factory for Starline Windows was extensively renovated and can now accommodate three full-scale television shows at any one time.

“We’re hearing more and more producers are not able to secure studio space in the Lower Mainland and we want them to know they have another deluxe, full-service facility that really caters to the needs of even the most demanding film, television or commercial projects,” said Martini Film Studios CEO Gemma Martini, whose family previously owned Starline Windows before making the drastic industry switch.

“We also want to make sure that production executives around the world know that we have invested greatly to bring the facility up to a high standard and intend to be in business long-term,” Martini continued.

Over 600 direct and thousands of indirect jobs could be generated by the facility, according to the studio.

The province’s film industry turned around following a short-lived lull from 2012 to 2013 that spurred the ‘Save BC Film’ campaign that saw productions choosing other jurisdictions with more favourable tax credits. The industry is so active now that it has even turned away some business.

“The film industry is a great contributor to our province’s economy as well as the livelihoods of many British Columbians,” said Rich Coleman, Deputy Premier and MLA for Fort Langley-Aldergrove. “A new studio like this will ensure film in this province continues to thrive and attract talented and skilled individuals who greatly contribute to B.C.’s reputation as a globally competitive filming location.”

Since the downturn, the low Canadian dollar and the provincial government’s competitive tax incentives have helped attract productions and maintain industry jobs in the province. But other provincial and state jurisdictions are trying to keep up with their competition.

For instance, Toronto’s film and production industry has traditionally been focused on Canadian productions, however, over the past 15 years it has been making headway on an industry Vancouver has dominated in Canada.

Ontario’s tax credits for the industry have become competitive, and the production work it lures becomes a catalyst for the maturity of the local industry. Its local workforce centred in the Toronto region has gained more experience, and the production demand has accelerated the creation of new film production infrastructure, such as the construction of massive new studios and the opening of companies that support industry activities.

Film industries in Quebec, Louisiana, and Georgia are also experiencing a similar trajectory due to tax incentive changes.

And more recently, California expanded its tax incentives in a bid to bring ‘runaway productions’ back to the state. Last month, studio executives announced that Vancouver-filmed television series Legion and Lucifer will be moving its productions to Los Angeles after being enticed by the state’s new tax credits.

Productions are estimated to have spent approximately $2 billion in Metro Vancouver in 2016, more than twice of the estimated $800 million spent in Toronto during the same period.