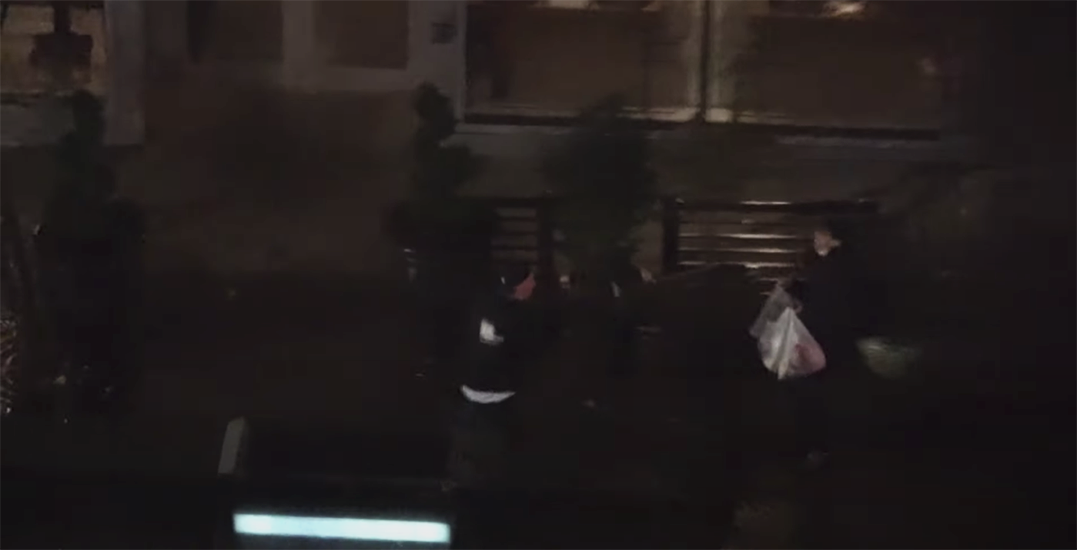 Update November 24, 2021: Vancouver police say they’ve arrested a 26-year-old man in connection with this incident. There was already a BC-wide warrant out for his arrest for a difference incident. Police would still like to speak with the victim.

A concerning video posted on YouTube shows a man in downtown Vancouver swinging a stick at a stranger.

The two-minute video was uploaded and shared on November 1. According to the Vancouver Police Department (VPD), the incident occurred in the area of Burrard and Drake at approximately 8:30 pm.

The individual in question can be seen walking down Burrard Street, lightly waving what appears to be a rod or stick.

He is then seen approaching a person holding grocery bags and pointing the stick directly at them. He continues to walk towards them until they turn and run away.

Later in the video, the man holding the stick is seen walking towards a person holding an umbrella. The person with the umbrella has his back turned to the man and appears to walk away before he can get any closer.

The video ends with the man boarding a bus, and he appears to bring the stick with him.

Sergeant Steve Addison, VPD Media Relations Officer, tells Daily Hive that this “appears to be another random and unprovoked assault.”

And while they received a report of the initial incident, they have yet to hear from the victim in the video.

“Unfortunately, it appears the victim did not report the incident to police,” Addison says. “We would like to speak with the victim to find out more about what happened.”

Random, unprovoked attacks in Vancouver have been on the rise lately. According to data shared by VPD, more than four people a day are victims of random assaults.

On November 24, Vancouver police said they had identified and arrested the suspect seen in the video. Two patrol officers identified the 26-year-old man when they responded to reports of a disturbance at a social housing complex near Cambie and Dunsmuir streets.

When the officers approached the man, he allegedly told them he had a gun and tried to flee. In the end, he was arrested and taken to jail.

The 26-year-old West End resident was already wanted on a BC-wide warrant for a different offence.